Racing Point: At least we got some points 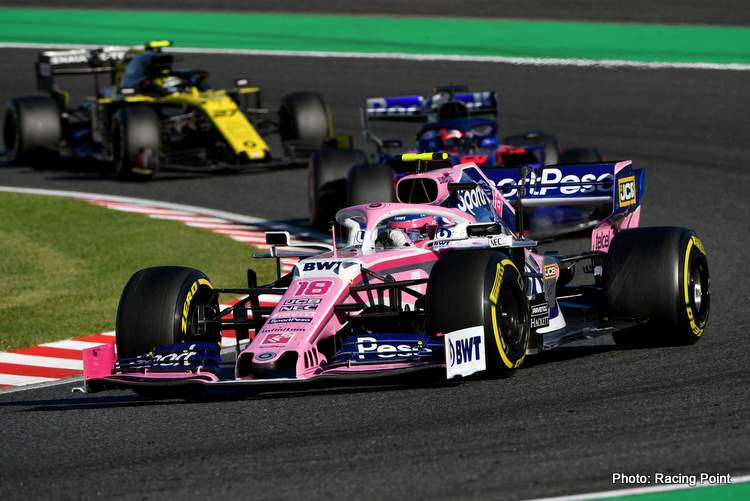 Racing Point report from the Japanese Grand Prix, Round 17 of the 2019 Formula 1 World Championship, at Suzuka Circuit.

“Our pace in the race was better than qualifying and I was more confident with the car. I made a good start and the team did a fantastic job with the strategy. We pitted a second time for Soft tyres late in the race and I managed to get back into the points.

“There was confusion at the end because the chequered flag came out a lap early, so when I was taken out by Gasly the race had already finished. With the fresh tyres I was much faster than him. I was ahead of him and left enough room so there was no need for the contact.

“It’s disappointing to finish the race like that – with a damaged car – but at least we got some points for the team.”

“We had a good first stint running solidly in the top ten, but the main issue today was struggling with the tyres in the final laps. I spent most of the race just behind Gasly, which wasn’t good for my front tyres, but it was really during the last ten laps that we lacked the grip to hold on to eighth place.

“We had committed to the one-stop, but maybe the two-stop strategy was the way to go because it gives you a big advantage at the end of the race. We saw that with Checo.

“We had good track position at the beginning of the race so we tried to hang on for the points. It didn’t go our way today and we will analyse things to understand where we can improve for the next time.”

Otmar Szafnauer, Team Principal: “It was a tough call to choose between one or two stops today and the results confirm there was very little to choose between the two strategies. Lance ran inside the top ten for pretty much the entire race and deserved to come away with some points.

“He did a super job of fending off the Renaults for a good number of laps, but they made their tyre advantage count in the last few laps. Sergio, who was running behind Lance, was able to roll the dice with no downside, and switch to a two-stop race with about ten laps to go.

“He made the most of a set of new softs to score a couple of points. Also, credit to the pit crew today for some very quick stops, including a 2.18 seconds stop for Sergio, which was the quickest of the day. Credit also to Mercedes on a sixth consecutive Championship title – a really incredible achievement.”