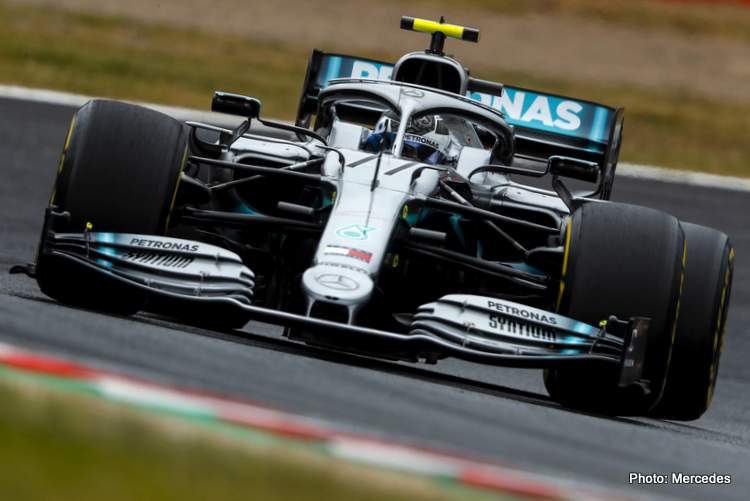 Valtteri Bottas again led his Mercedes teammate Lewis Hamilton as the pair finished one-two on the timing screens at the end of day one of track action at Suzuka, the final one until race day on Sunday as organisers have shut down Suzuka for tomorrow as Typhoon Hagibis powers towards the area.

As he did in the first session, Bottas was able to edge Hamilton in FP2 as the pair were the class of the field on the opening day.

The Finn’s best effort 1:27.785 was a tenth faster than the Briton in the sister car – both using the Pirelli medium tyres for their fast laps.

While the gap to their rivals was almost a full second in the first session, the deficit reduced substantially with Max Verstappen popping the Red Bull into third place, he was 0.281 of a second shy of the top time suggesting the Honda-powered RB15 will be strong on home turf as expected. He too was shod with mediums on his hot run.

Charles Leclerc was fourth, four-tenths shy of Bottas’ benchmark time with Ferrari teammate Sebastian Vettel next up in fifth and a quarter of a second off the youngster in the sister car. The Reds have work to do or are keeping their powder dry.

Red Bull rookie Alex Albon rounded out the top six, his time six-tenths down on the best lap, the Thai driver setting his best lap time on the Pirelli mediums.

As in FP1, McLaren’s Carlos Sainz was again Best of the Rest in seventh, although 1.2 seconds down on the pace-setting Mercedes the Spaniard was a quarter of a second better than eighth-placed man Sergio Perez in the Red Bull.

Pierre Gasly had a solid showing in the Toro Rosso and was good for ninth, with Lando Norris in the other McLaren tenth.

Six-tenths of a second separated the top half dozen at the sharp end of the grid, while less than a second covered Sainz down to 16th place on the timesheets.

Meanwhile, earlier in the day, F1 and the FIA confirmed that qualifying, originally scheduled to take place on Saturday will now be held at 10 a.m. (0100 GMT) on Sunday, according to a revised schedule issued by organisers.

The final FP3 session, which would normally take place before qualifying, will not be held as all track activity at Suzuka has been cancelled and gates closed to spectators and media on Saturday.

The FP2 results are a provisional grid, with Bottas on pole if qualifying does not take place on Sunday morning as rescheduled by organisers for the safety of all concerned at the venue which will feel the wrath of Hagibis.

Meanwhile in terms of the championships, Mercedes – who have won every race at Suzuka going back to 2014 – can seal a record-equalling sixth successive F1 constructors´ championship by scoring 14 more points than Ferrari on Sunday.

Hamilton, 73 points clear of Bottas in the overall standings with five races to go, is also well on his way to clinching a sixth title. 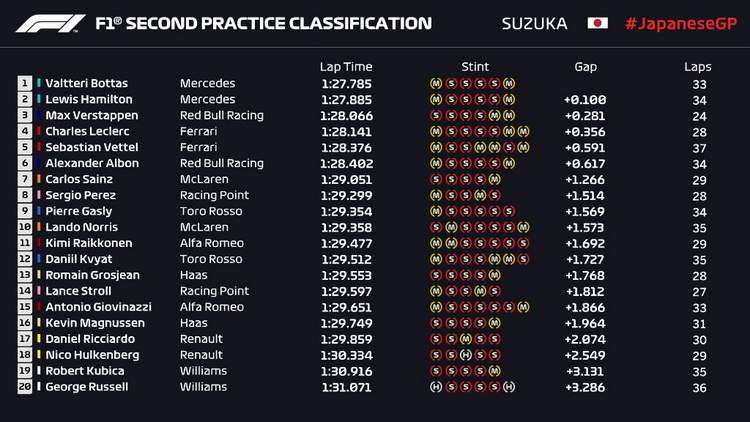