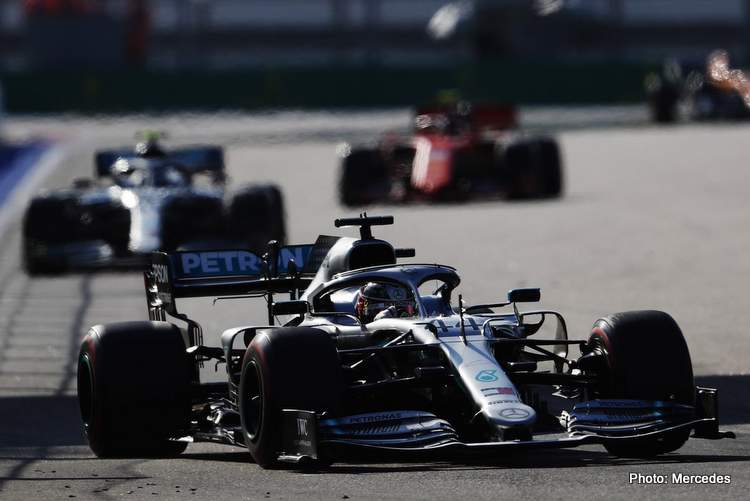 Mercedes driver Lewis Hamilton was gifted victory at the Russian Grand Prix as Ferrari messed up a race which was theirs to win but instead lost, and furthermore added more fuel to the rivalry between their drivers.

It was a race of two halves with Sebastian Vettel stealing the lead in the drag to Turn 1 from the start, with pole starting teammate Charles Leclerc chasing. That’s how it remained until just over the halfway mark.

Meanwhile, the Ferrari pit were commanding Vettel to allow Leclerc past but the German remained upfront delivering a blistering pace that his teammate struggled to match.

The obvious call, without making it the drama it became, was to allow Leclerc to undercut, which is exactly what they did eventually. Vettel emerged from his stop behind Leclerc but with much fresher tyres.

Then it all came to an end as Vettel reported a “K-failure” and was told to park the car which he did. His race was over, his only reward was Driver-of-the-Day as voted by fans.

A virtual safety car ensued and became a full safety car when the brakes failed on the hopeless Williams of George Russell. He crunched into the wall.

Mercedes pitted their pair upfront, while Ferrari took a lap longer to bring in Leclerc and that made the difference. When he emerged he was behind the silver cars in third where he remained despite a number of attempts the Ferrari could not find a way past.

Leclerc said afterwards, “At least we are quite consistent. It’s good to be back on the podium – a shame for the team to not have the second car up here. On our side an OK race, Mercedes are still very quick on the race runs, a lot quicker compared to qualifying.

“I will always trust the team but the tactic was me giving the slipstream to be one-two at the end of the straight, which happened but then I… I don’t know. I need to speak to the team to know the situation better,” added the Ferrari driver.

Thus Hamilton scored an unlikely victory which takes him a step closer to a sixth F1 world title, with Bottas making it a one-two and thus ending Ferrari’s three-race streak. Leclerc was third on a day his team again shot themselves in the foot.

Hamilton said afterwards, “It’s incredible to have this result today considering how quick [Ferrari] were off the start. Just keeping up with them was the real incredibly hard task. But we haven’t given up and we keep pushing. Honestly, I try not to think about the championship. One step at a time, one foot in front of the other – we don’t want to stumble.”

Ferrari’s implosion should not detract from what Mercedes achieved without the best car. They lacked the firepower a day earlier, but that potent race pace remains and this was evident with Hamilton hammering the fastest lap too. The bounced back in champion style, that their rivals helped cannot be denied.

The Red Bulls were mighty on an afternoon in which both their drivers started out of position, with Max Verstappen turning ninth on the grid to fourth place, and rookie Alex Albon was stellar as he turned a pitlane start to fifth place.

It is a shame that penalties dogged them because Verstappen might have been in the mix, while Albon improving with every outing and ticking all the boxes on his checklist making a strong case to be retained by the team for 2020.

It was good to see McLaren battling at the sharp end, the orange cars among the silver cars must ahve warmed the hearts of their fans, but in the end the Big Three had too much firepower.

Nevertheless, Carlos Sainz again did his shares the world of good with a solid drive to end Best-of-the-Rest in sixth, with rookie Lando Norris again mighty for a rookie on his way to eighth. A strong showing from the upwardly mobile Woking outfit.

Racing Point’s Sergio Perez in seventh split the pair on the results-sheet and showing his worth in a race of attrition which always brings out the best from the Mexican veteran.

Haas driver Kevin Magnussen was ninth on an afternoon he maximised his opportunities when the safety car played in his favour. A five-second penalty for leaving the track and gaining an advantage cost the Dane eighth place.

In contrast, his teammate Romain Grosjean had a familiar early shower for again being involved in a first lap fracas.

Nico Hulkenberg was tenth on a day that Renault underperformed when much was expected of them. They were soundly beaten by their customers and their woes compounded by Daniel Ricciardo’s shunt with Grosjean and the Alfa Romeo of Antonio Giovinazzi which was the prosciutto in the Renault/Haas sandwich.

At the start of the race Vettel made a superb start form third on the grid and was past front-row starter Hamilton before they reached Turn 1. Vettel then got a tow from pole-sitting team-mate Leclerc and stole the lead through Turn 2.

Further back, though, there was a collision involving Grosjean, Giovinazzi and Ricciardo. The incident resulted in Grosjean exiting the race, while both Ricciardo and Giovinazzi required pit stops for repairs.

The collision brought out the Safety Car and under the caution Vettel led Leclerc with Hamilton in third place ahead of Sainz who had passed Bottas at the start.

When the Safety Car left the track Vettel held his advantage over his team-mate, a situation that appeared to cause some friction, as Leclerc had apparently expected the German to allow him to retake the lead after affording Vettel a tow after the start.

Leclerc was eventually told that the pass would take place later in the race, information that seemed to mollify the fiery Ferrari youngster.

Leclerc was the first of the leading pack to pit, with the Monegasque driver stopping for medium tyres on lap 22. He rejoined in fourth place behind Bottas (who had earlier got back past Sainz) and then began to set fastest laps.

Despite complaining of fading rear tyres Vettel stayed out until lap 26 and when he finally dived into the pits to take on medium tyres the lead changed hands as promised, with Leclerc flying past to take the lead.

Vettel’s time in action after his stop was brief. By the time he reached Turn 15 of his first lap out from the pits his Ferrari had given up and an engine issue saw him pull over at the side of the track.

That brought out the Virtual Safety Car and then when Russell crashed out under the caution, the physical SC was deployed.

When the order shook out, Mercedes had profited hugely. The free stop and pace under the VSC allowed both Hamilton and Bottas to jump ahead of Leclerc, with Hamilton now leading. Leclerc was now third ahead of Max Verstappen who had climbed from ninth on the grid.

Sainz was fifth ahead of Magnussen, Norris, Pérez, Stroll and Albon who had made it into the points after a pit lane start.

Albon then began an impressive march forward, starting after the re-start when he passed Stroll and Pérez on in the space of two laps before bypassing Norris on lap 34 to to claim P7.

Albon then began to hunt down Magnussen and at the end of lap 42 he launched a late-braking attack into Turn 13 that worked perfectly. With P6 claimed he next set off after Sainz who was on the medium tyre.

And the Thai racer capped a brilliant afternoon with an equally brilliant move past Sainz at the start of lap 49. He pulled alongside the Spaniard on the sweep through Turn 3 and then powered past on the entry to the next corner to seal fifth place.

And that was how the order remained until the chequered flag. Leclerc pushed hard to get past Bottas, but the Finn resisted the pressure and after 53 laps Hamilton crossed the line to take his ninth win of the season and the bonus point for posting the fastest lap on lap 51.

Bottas was second ahead of Leclerc while Verstappen and Albon took fourth and fifth places respectively.

Sainz took sixth place for McLaren ahead of Pérez. Norris added to a positive result for McLaren with eighth place, while Magnussen managed to hold on to P9 despite incurring a five-second penalty for leaving the track and gaining an advantage earlier in the race.

The final point on offer went to Renault’s Nico Hulkenberg. 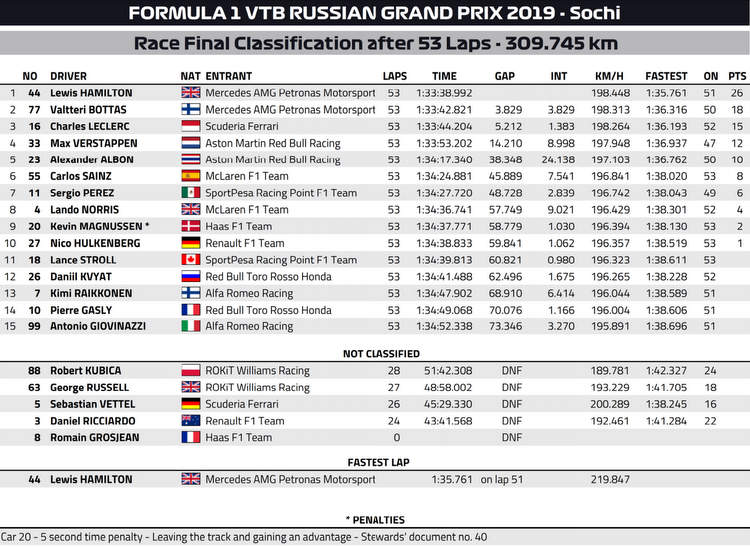 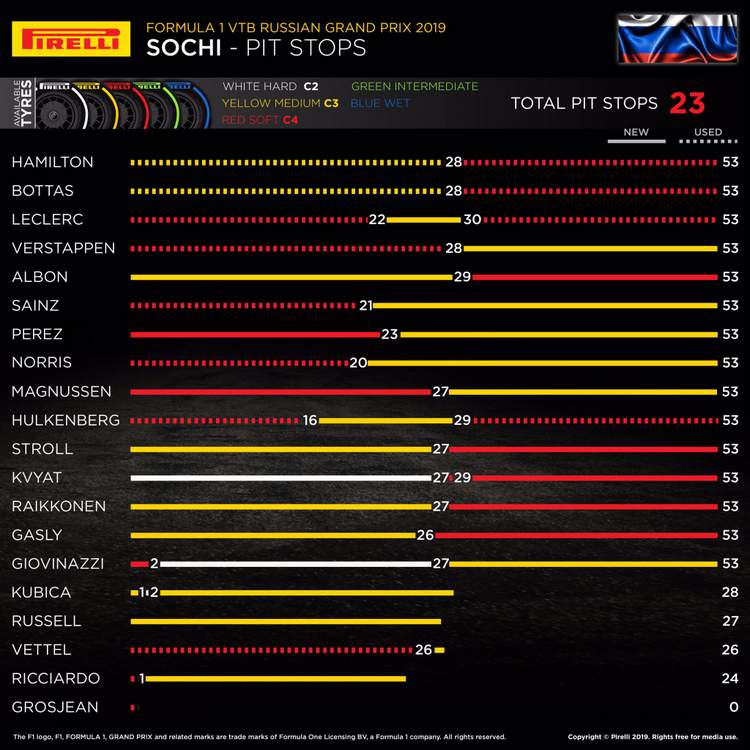 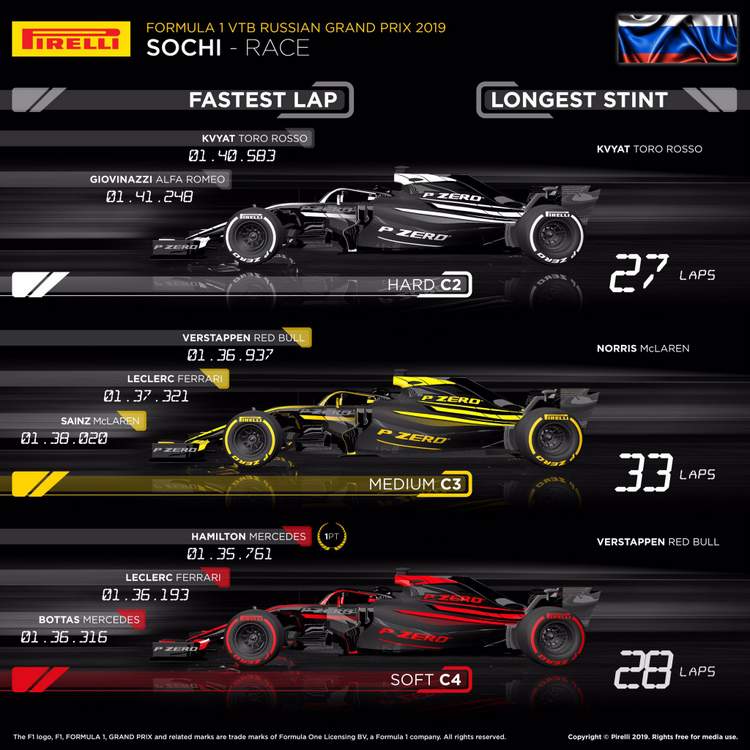 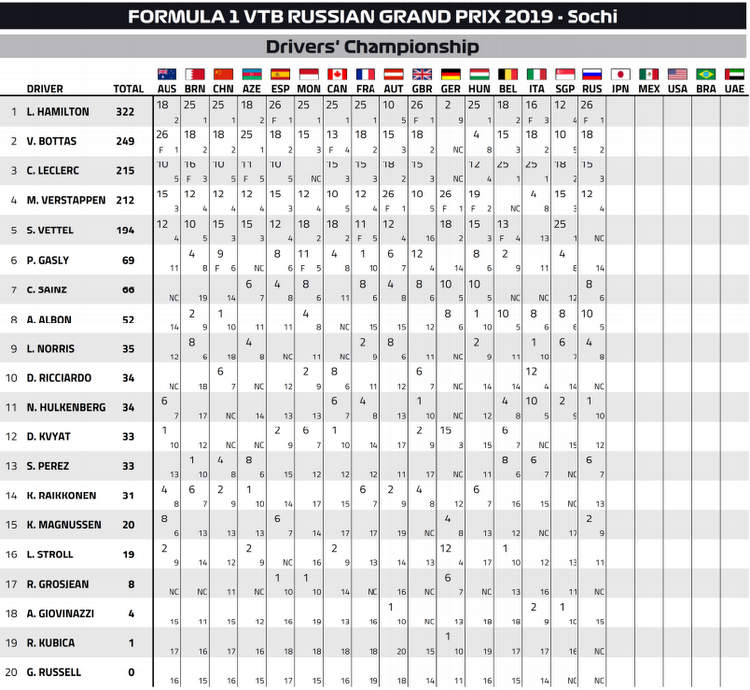 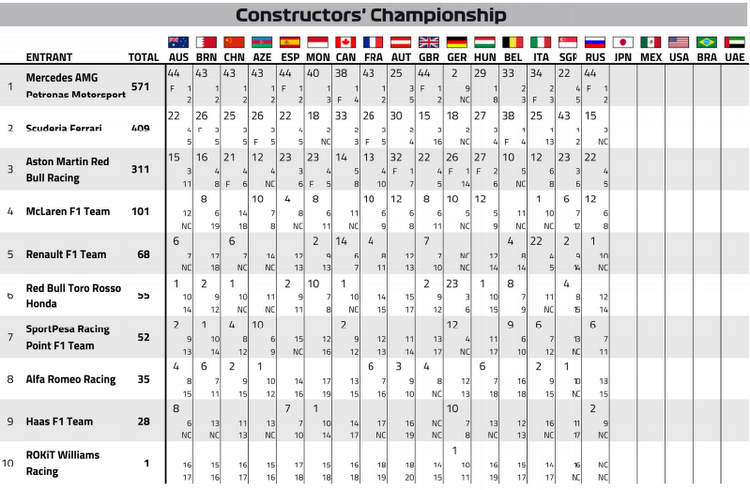