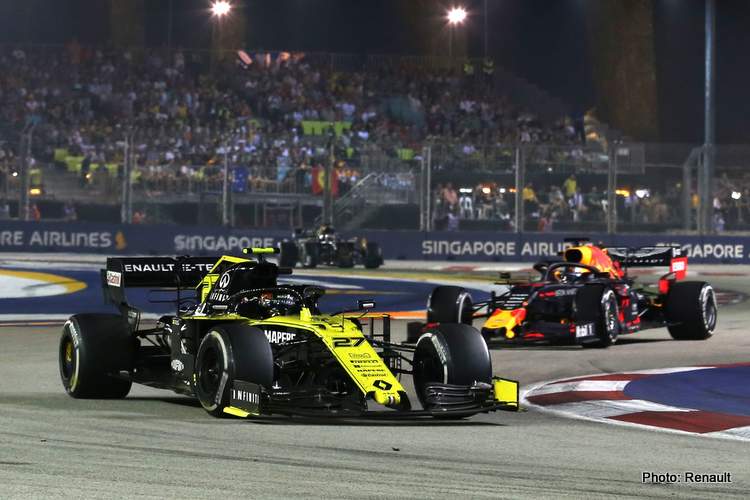 Renault F1 Team’s Nico Hülkenberg recovered from a lap one puncture to finish ninth in the Singapore Airlines Singapore Grand Prix with team-mate Daniel Ricciardo falling short of the points.

Positions ebbed and flowed throughout an eventful Grand Prix where the Safety Car was deployed three times. Nico made a strong start to the race but picked up a puncture to his left front after an incident at Turn 5 on lap one.

He pitted for Hard tyres and later, under the first Safety Car, changed for new Mediums, where he lingered on the edge of the top ten. From there, Nico pressed on to take ninth at the flag.

Daniel started the race from the back of the grid but moved up a number of positions in the early running. He ran as high as third with the frontrunners pitting, but later picked up a puncture to his rear right. It was a difficult recovery from there with the Australian battling to fourteenth place.

“I’m happy we got something from the race, even if it’s not what we wanted today. After the contact on lap one it was always going to be difficult, but we kept cool, patient and managed to take two points. We got a bit lucky with the first safety car, it ensured we could put the Mediums on and then make some progress. It’s eventful here every year and you have to stay in the game. We did well to overtake – it’s so difficult here – so we can be pleased with that.”

“It was a long one today and it’s a shame it ended up like that. The start was fun with some good overtakes and getting into a decent position. I gained some confidence there and got into a rhythm. We were ticking every box and really made the most of everyone being bunched up. Then it all came undone with the incident and the puncture meant our race was more or less over. We deserved a better outcome today.”

Cyril Abiteboul, Team Principal: “There is obviously a sense of ‘what could have been’ today. After showing decent pace all weekend, in qualifying and during the race, two points for Nico seems a poor reward for both him and the team even if he was last after the first-lap contact with Carlos. The race was marred by many incidents, which we didn’t benefit from.

“Daniel’s comeback after his disqualification was remarkable on a track like this. Contact sent him back to square one. Once again this shows how important the starting positions. It was encouraging, however, to be back at this competitiveness level on a track which is very different from Spa and Monza. A sign that the car is better and that we must not write off this season.”