Haas: We got a little bit unlucky 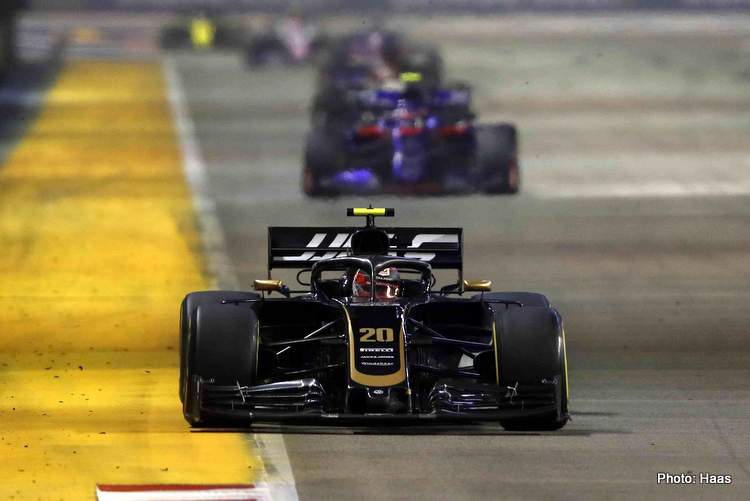 Both Haas F1 drivers, on Pirelli P Zero Yellow medium tires, made headway at the start of today’s 61-lap race around the 5.063-kilometer (3.146-mile), 23-turn temporary circuit. Magnussen gained four spots to ninth from his 13th grid position by shooting past the Alfa Romeo of Kimi Räikkönen and Toro Rosso’s Pierre Gasly, and by avoiding the aftermath of contact between McLaren driver Carlos Sainz and Renault’s Nico Hulkenberg ahead of him. Grosjean picked up one position from 17th to 16th on the opening lap and held that position throughout the opening tire stint.

Magnussen pitted from ninth on lap 19 for a set of White hard tires and returned to the track in 14th. Grosjean stayed out another five laps and advanced as high as 12th before falling back to 14th to a pair of drivers on fresher tires, including Magnussen, who settled into the 13th position. Grosjean pitted for his set of hard tires on lap 24 and resumed in 18th.

Over the next 10 laps, Magnussen moved up to ninth after four drivers ahead of him who had yet to pit finally made their stops, including Antonio Giovinazzi of Alfa Romeo and Daniel Ricciardo of Renault who made contact ahead of him.

Shortly thereafter, on lap 36, Grosjean and Williams driver George Russell made side-by-side contact, which sent Grosjean to the pits for a new front wing and a set of Red soft tires and dropped him back to 18th. The incident ended Russell’s night and brought out the safety car. When the race went back to green on lap 41, Magnussen was in eighth and Grosjean moved up to 16th.

Incidents involving other drivers continued over the next segment of the race that brought out the safety car on two more occasions, the first for the car of Racing Point’s Sergio Perez that stopped on track, and the second for a collision between Daniil Kvyat of Toro Rosso and Räikkönen.

Magnussen slipped back to 10th on the lap 47 restart after Perez’s incident and began to struggle to keep his hard tires under him while Grosjean, on faster soft tires, was able to make steady forward progress.

Magnussen made his second stop of the race on lap 57 for a set of soft tires that would take him to the end. He resumed in 17th while Grosjean was 11th, their positions at the checkered flag.

With tonight’s results, Haas F1 Team remained ninth in the constructors’ championship with 26 points, nine behind eighth-place Alfa Romeo and 25 ahead of 10th place Williams.

Sebastian Vettel of Scuderia Ferrari won the Singapore Grand Prix by 2.641 seconds over his teammate, polesitter Charles Leclerc. It was Vettel’s 53rd career win, his fifth at Marina Bay and his first of the season. Rounding out the podium was third-place Max Verstappen of Red Bull Racing.

Romain Grosjean: “We weren’t far from points. Kevin (Magnussen) was having a great race at the beginning, he was in the top ten when I was struggling more at the back. We tried a different strategy – staying out very long on the medium tires. We were waiting for the safety car, which then actually came when I had the contact with George (Russell).

“I need to see the footage, but I was as left as I could be at the exit of the corner. When there’s no run-off area, there’s nowhere to go, so I touched the wall and we touched there – there was no more room for me to go left. We came back in the race towards the end with the other safety car periods. We battled as hard as we could, but we just had too much tire degradation at one point, so the last few laps were a bit emotional.”

Kevin Magnussen: “Unfortunately setting the fastest lap wasn’t worth anything for me. We were fighting in the top ten but got unlucky with the safety cars. We’d been working so hard, we were doing such a good job to get into the top ten on merit – it was not with luck or lucky pitstops or anything.

“We had a good first lap and good pace in the car. Then we just had all these safety cars work against us. On top of that we had a plastic bag over the front wing, we had to pit to remove that. It was a disaster from there. I really feel bad as it had been a good race and the whole team did such a good job, then we get it taken away from us in a cruel way.”

Guenther Steiner, Team Principal: “Obviously, it was an exciting race for us. In the end we didn’t get any points, but all-in-all I think everybody did a good job. We got a little bit unlucky, but it was a lot better than the last two races.

“If somebody had said that to me before the race I wouldn’t have believed them. We don’t have any points, we finished 11th and 17th, sometimes we were in the wrong place at the wrong time. I think the team did a good job. We keep our heads up, we keep going, and I know it will come back to us.”

Round 16 of the 2019 FIA Formula One World Championship is next weekend’s Russian Grand Prix at Sochi Autodrom. Practice begins Sept. 27, qualifying takes place Sept. 28 and the race runs Sept. 29.