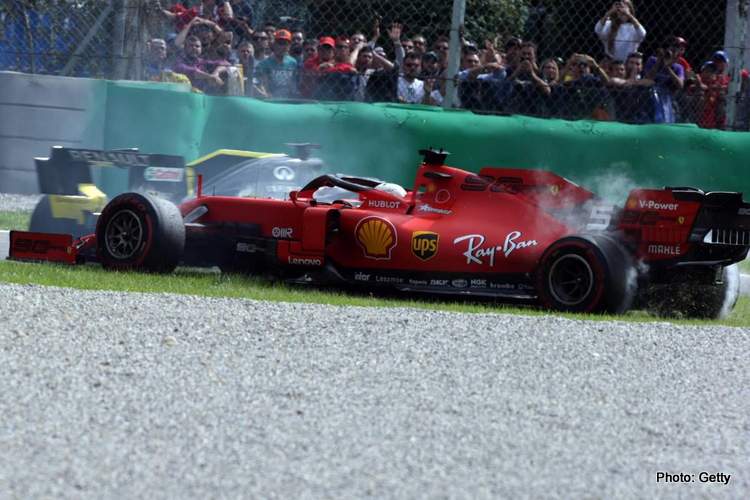 Ferrari’s Sebastian Vettel has entered the danger zone for a race ban after again falling foul of the FIA appointed Formula 1 stewards on a nightmare Italian Grand Prix for the German.

The four-times F1 world champion was handed three penalty points for dangerous driving in his team’s home race, taking his tally to nine.

Any driver who amasses 12 points in a 12 month period is banned for one race automatically, and Vettel has three more grands prix to go before he starts to shed any of those accrued to date.

Three points is the maximum the stewards can hand out, with that penalty reserved for the most serious incidents.

There was little doubt Vettel’s misdemeanour was of that magnitude, with the German spinning off at Ascari before compounding his unforced error by returning to the track clumsily and without making sure the road was clear.

Lance Stroll, in the Racing Point, was unable to avoid a glancing contact and went spinning off, returning in an equally alarming fashion and almost colliding with Toro Rosso’s Pierre Gasly.

Vettel was also handed a 10 second stop/go penalty, dropping him to the back of the field.

To add salt in the wounds, he was then lapped by race-winning teammate Charles Leclerc and finished 13th — his second blank in five races, “I made a mistake and lost the car. After that, the race was a bit different.

“Coming back (on track), I knew there would be a gap but I struggled a little bit to get out… I think I was stuck on the grass and lost a bit of momentum there and that took a little bit longer. I couldn’t see anything. Obviously, on my side, I’m not happy. I can’t be happy with my day today.”

Vettel has not won a race for more than a year, his last being at the Belgian Grand Prix in August 2018.

He also spun at Monza last year after starting on the front row and then colliding with Mercedes rival Lewis Hamilton on the opening lap. He fought back from 18th to fourth on that occasion.

His temperament has been increasingly questioned, however, over the past year with some pundits accusing him of cracking under pressure and making mistakes unworthy of a multiple champion.

Asked by Sky Sports television whether he was falling out of love with the sport, the 32-year-old replied: “No, not really, I haven’t.

“Of course I still love what I do, but surely when you’re not doing well what you know you can do well, you can’t be happy,” he added.

Big Question: How will Seb handle life as number two?