Haas: It was a very disappointing race 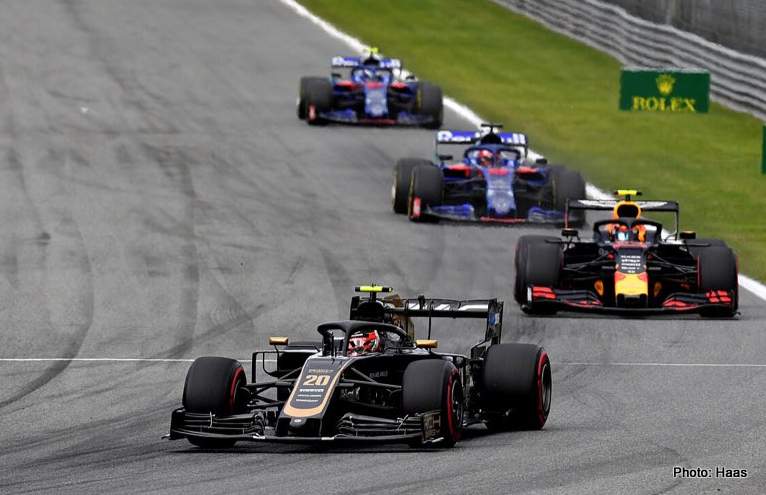 Grosjean started 13th on a new set of Pirelli P Zero Red soft tires but quickly lost ground when he was hit from behind and forced down the escape road in turn one on the opening lap and rejoined in 16th. He was back to his original starting position by lap seven as a result of a pair of incidents ahead of him, but then spun in turn 10 on lap 10, requiring a stop to replace his flat-spotted tires.

He took medium tires and resumed in 20th, then pitted a second time during a virtual safety car period on lap 31 for a new set of softs. Grosjean avoided trouble the rest of the way and crossed the finish line 16th.

Magnussen showed early promise of a points-paying finish when he held ground from his 11th place starting position, moving up to 10th by lap four and to eighth by the seventh tour around the 5.793-kilometer (3.6-mile), 11-turn circuit. He was 10th when he pitted on lap 21 to switch from the soft tires on which he started the race for a set of mediums, resuming in 14th.

He advanced to ninth by lap 30 and held that position for five laps until a brief lockup while defending through turn one on lap 35. His tires flat-spotted, he pitted for a set of soft tires and resumed in 15th. Nine laps later, Magnussen was called to the pits after the team detected a hydraulic issue and the car was retired.

With today’s results, Rich Energy Haas F1 Team remained ninth in the constructor’s championship with 26 points, eight behind eighth-place Alfa Romeo and 25 ahead of 10th-place Williams.

Scuderia Ferrari driver Charles Leclerc scored the victory from the pole for the second consecutive race and the second time in his career in today’s Italian Grand Prix. He took the checkered flag by a margin of .835 of a second, beating the Mercedes duo of runner-up Valtteri Bottas and third-place-finisher Lewis Hamilton.

Seven races remain on the 2019 Formula One schedule. Next up is the Singapore Grand Prix set for Sept. 22 on the Marina Bay Street Circuit.

Romain Grosjean, 16th: “It was very complicated today. I was hit from behind into turn one and it picked up the anti-stall. I had to pull the clutch, release the clutch, and by the time I had done all that I was driving through the polystyrene blocks and was dead last through the first corner. I tried to push to come back, then I had a spin at Ascari.

I came into the pits and asked the team to remove a fair bit of aero balance, as the car was very much on the nose. We did it, but the car was still overbalanced. We pitted again and removed one percent of aero balance, and the car was still overbalanced. Definitely something went wrong with the car today. We need to analyze everything, the balance we had today was definitely not what we had during the rest of the weekend. A lot to do.”

Kevin Magnussen, DNF: “I had a hydraulic problem at the end, so we had to retire, unfortunately. Until then, it had been going okay. I was fighting to keep people behind, which is normal for me these days. That said, we had been in a good position and a lot of other people were having problems. It was just bad luck to have our problem at the end. On the positive, we were in the top ten from beginning to end – of our race at least. It wasn’t a true picture but at least we were going for it. It looked like we could do something, but obviously I’m gutted we had to retire at the end.”

Guenther Steiner, Team Principal: “It was a very disappointing race. Kevin (Magnussen) started off running pretty well, but then it all went wrong when he locked up. The car was just difficult to drive. A hydraulic issue then meant we had to retire the car. Romain (Grosjean), it looked like he was hit at turn one, his car was out of balance after that. We’ll need to see what happened, but the car was just slow, there must have been something wrong with it. He couldn’t drive it. He tried to get the balance back on the pit stop, but it was not possible. We were slow. It’s a disappointing weekend for the whole team. We just need to regroup and keep on going until we find a solution to our lack of performance.”