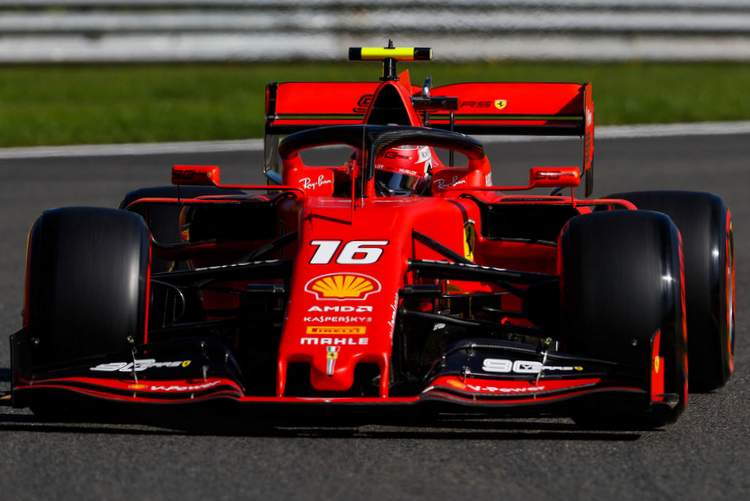 Charles Leclerc was untouchable on Saturday afternoon as he powered to pole position for the Belgian Grand Prix, Round 13 of the 2019 Formula 1 World Championship, at Spa-Francorchamps.

The Ferrari driver has been unbeaten this weekend since FP2 and claimed his third pole position in F1 with a couple of scintillating laps around the daunting Spa-Francorchamps, his final run six tenths better than Sebastian Vettel’s effort as the pair painted the front row red for tomorrow’s race.

Ahead of the session, Ferrari were favourites as they were able to stretch their legs with Leclerc beating his older teammate for the sixth time in a row and establishing himself even further as the fastest bloke in red on Saturdays.

Leclerc would’ve done the business with his first effort, but went a tenth better with the pole-winning time of 1:42.519 which was a whopping three-quarter of a second upon next best. It was an emphatic display that sets him up for a first win in the top flight tomorrow.

The kid from Monaco summed up his afternoon: “It felt good. Obviously the first sector was not exactly what I wanted, especially in the first corner, we had to go very slow because there was a lot of traffic.

“I struggled quite a bit but after that the second corner we were strong and it felt amazing. I asked in the garage not to bother with the slipstream as it was a bit of a mess, so to prepare the tyres for the lap overall, and it worked out so I’m very happy.

“We were struggling a little bit more for the race pace yesterday so we need to work on that but looking at the pace today, I’m pretty sure we’ll be strong,” he added.

Celebrations in the garage and in the cockpit, as @ScuderiaFerrari and @Charles_Leclerc celebrate pole position at Spa! 🙌#F1 #BelgianGP 🇧🇪 pic.twitter.com/Mhee1urWmc

Vettel cursed the traffic afterwards but took it on the chin, “At the end of the day it’s good that we secured the first row. To fight pole I was in a queue it doesn’t help – no excuses.

“I’m looking forward to the race. The car should be better, it was better today, temperatures should drop overnight, I don’t know but it’s the same for everyone,” added the four-time F1 World Champion.

In the two hours between sessions, Lewis Hamilton’s crew did a supreme job to fix the Mercedes he wrecked in FP2 and as he tends to do under adversity, dug deep to claim third place. He was a tenth and a bit faster than teammate Valtteri Bottas in fourth to make it an all-silver second row.

In retrospect, it was a clumsy session by the champs, their cars tripping up during Q3 with #44 car almost ramming #77 at one point. In retrospect, the whole weekend has been niggly for the Silver Arrows.

Hamilton was typically magnanimous in his summary,  “P3 was a terrible session for me and of course, it’s painful because you know how hard people work to build those parts, and how hard the guys work to build the car, so I knew that was going to be a tough challenge.

“Ferrari have done a great job today – Charles did an exceptional job – and I hope we can bring the fight to them tomorrow,” added Hamilton who has DNFed on four occasions at Spa, more than at any other venue on the calendar.

Next up, Honda simply did not have the horsepower on tap or party mode to match the pace-setters.

Max Verstappen had to settle for fifth, but over a second shy of the benchmark time and will be hoping they reel some of that in with race pace and strategy. But their engine did them no favours at the power-hungry strip of ribbon in the Ardennes, they still have work to do.

His new Red Bull teammate, set to start from the back of the grid anyway, ran his own programme and settled for 14th on the timing screens, from where he won’t be starting on race day.

Alth0ugh still an age behind the Big-Three, Renault found the sweetspot in their package as Daniel Ricciardo headed Nico Hulkenberg in the Best-of-the-Rest battle, the Australian fifth fastest but 1.7 seconds shy of the pace; he German was three tenths adrift of his teammate.

Kimi Raikkonen defied a muscle injury to deliver the eighth-best time in the Alfa Romeo, while his teammate Antonio Giovinazzi was forced to park on the trackside with the Ferrari PU billowing smoke. He was classified 15th.

Racing Point driver for the next three years, Sergio Perez was ninth fastest with teammate Lance Stroll 13th, three-tenths down on his more experienced teammate.

The Haas pair were 10th and 11th with Kevin Magnussen a few hundredths faster than Romain Grosjean in the sister car.

Misery was compounded at Williams when Robert Kubica was forced to park his car with flames licking out of the Mercedes power unit. He did no laps as a result while his teammate George Russell was slowest of those who set times.

Neither Toro Rosso made it beyond Q3, their cause not helped as they were caught out by the red flag situation that took place to clear Kubica’s burning car.

Carlos Sainz was also a victim of the red flag stoppage, having to scupper his effort on a disappointing afternoon for McLaren who, on the day, never looked like Q3 candidates. Lando Norris was 12th  and admitted he had extracted all he could from his car.

Worth mentioning was the pandemonium during Q3 as cars tripped up as they jostled for track position ahead of the flying laps. It was jaw-dropping stuff out of an arcade game.

At one point it was reached a state of lunacy, as cars on out laps hit the brakes as queues developed on track while some drivers, on flying laps, somehow dodged and weaved to avoid the crowding. It was a sham and that there were no tears at the end of it all was a minor miracle.

One highlight though was an unbelievable display by Verstappen as he carved his way through a minefield of cars as if they were not there. Daring stuff from the Dutchman whose every move was roared on by his fans, whose orange colours were splotched over large sections of the grandstands.

Shades of the red rolled out in the Michael Schumacher era and the yellow of Ayrton Senna’s reign. But were they ever as well supported as the Belgian born 21-year-old with the bright orange helmet?

In closing, be warned that a mountain of confusing engine penalties will be taken by several drivers this weekend, thus expect a decidedly different grid to the qualifying results list below.

NB: A report on making sense of the chaos will be published before the race tomorrow it should be quite different what is seen below, but won’t affect the top five.

Q1 was red-flagged after five minutes as Kubica’s Williams suffered a smoke PU failure that left him stranded at the side of the track. The session was immediately halted.

After a 10-minute delay the action resumed and at the end of the opening session it was Leclerc who sat in top spot with a time of 1:43.587, half a second clear of Vettel.

Verstappen took third place in the segment but it was touch and go for the Dutchman, who prior to the final runs was outside the 107% margin after struggling with his car’s handling in the early stages of the session.

In the final run he was quick over the first sector, but then spent the rest of what was a crucial run threading his way through a stream of traffic. The trickle of slower cars became a river at the end of the lap, but Verstappen eventually crossed the line in 1:44.622 to take P3.

The session was then red-flagged for a second time when smoke jetted from the back of Antonio Giovinazzi’s Alfa Romeo and he pulled over on the run down to Eau Rouge.

With just 43 seconds left on the clock, Gasly was eliminated in P16 ahead of Sainz, Kvyat, Russell and Kubica.

Leclerc again set the pace in Q2, taking P1 with a first run of 1:43.376 that left him a little over a tenth of a second clear of Vettel. Mercedes rose to third and fourth, with Bottas ahead of Hamilton and that left fifth place for Verstappen, who set an opening Q2 time of 1:44.132.

Leclerc then lowered the benchmark to1:42.938 to seal P1 with a tenth of a second in hand over Vettel. The German meanwhile was half a second clear of Hamilton with Bottas a further four-tenths back.

Eliminated at the end of Q2 were 11th placed Grosjean of Haas followed by Norris, Stroll, Albon and Giovinazzi.

There was no denying Leclerc in the final session either. The Ferrari driver went quickest in the first runs with a time of 1:42.644 as Max posted an opening time of 1:44.239 to slot into P5 behind Hamilton, Vettel and Bottas.

The Dutchman improved by a whopping half a second on the final run, but as they have been all weekend Ferrari were untouchable, and Leclerc claimed pole position with a small improvement to 1:42.519.

Vettel completed the Ferrari front-row lock-out, seven-tenths of a second further back while Mercedes annexed the second row ahead with Hamilton third ahead of Bottas.

That left Max as the session’s fifth-fastest man and he’ll start from the front of row three tomorrow, ahead of the Renaults of Ricciardo and Hulkenberg, the Alfa Romeo of Räikkönen, Racing Point’s Pérez and Haas’ Magnussen. 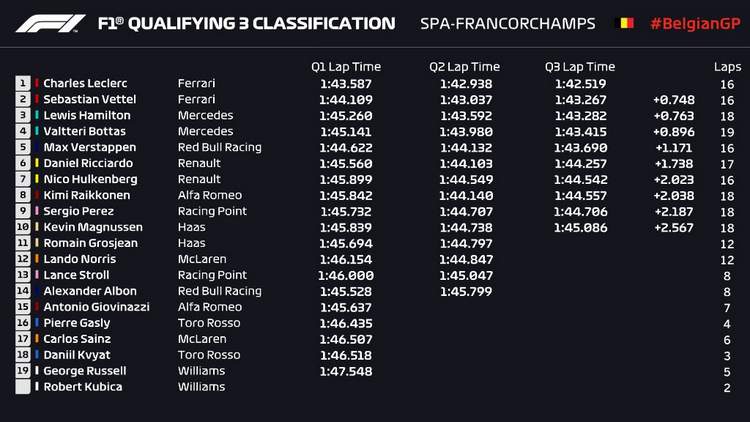