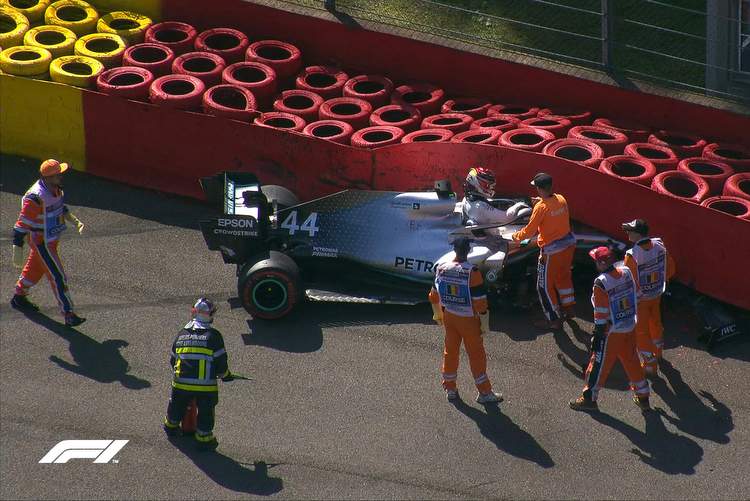 World Championship leader Lewis Hamilton crashed his Mercedes heavily half an hour into the final free practice session ahead of qualifying for the Belgian Grand Prix.

The unforgiving Spa-Francorchamps circuit claimed Hamilton when he lost the back end of the W10 after hopping the kerb at Fagnes as he started to turn right, spearing him off track and out of control into the wall with a hard metal bending thump.

BBC pundit Jolyon Palmer observed: “He’s hit the wall at a bizarre angle and a bizarre place. That’s a high-speed impact and even the rear of the car would have had a big jolt.”

With regards to the damage, Sky F1’s Karun Chandhok reported on the scene: “It should be OK in terms of gearbox damage,” says Karun as he gets a good look at that Mercedes. It’s more about the front. But it looks like cosmetic damage.”

The incident triggered a red flag as he alighted his car as it was retrieved by marshals.

After the impact, a disappointed Hamilton said over the team radio: “I’m in the wall, guys. Sorry.”