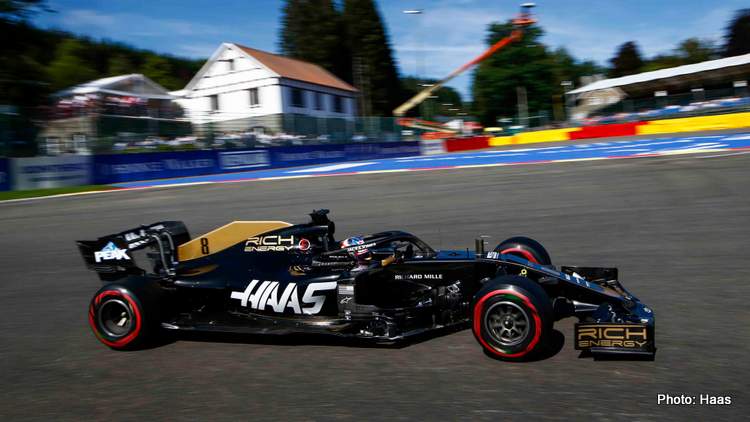 The 13th round of the 2019 FIA Formula 1 World Championship began with practice Friday at Circuit de Spa-Francorchamps as teams prepared for Sunday’s Belgian Grand Prix.

Both Rich Energy Haas F1 drivers utilized Pirelli P Zero Red soft tires throughout FP1 and both finished the session on high-fuel-load runs. Grosjean’s best lap of 1:47.176 came on his 14th of 18 tours of the circuit and was 14th fastest on the timesheet. Magnussen’s best time of 1:48.488 came on his 14th of 21 laps placing him 16th overall at the checkered.

Grosjean and Magnussen began FP2 in the afternoon with a short run on new Yellow medium tires before switching to new sets of softs. Grosjean’s best lap of 1:46.120 came on softs on his 13th lap of the session – good for 12th overall for the Frenchman.

Magnussen’s quick lap of 1:46.399 was also banked on the soft compound on his 13th tour, placing the Dane 18th on the timesheet. Both drivers finished the session with distance runs, Grosjean on used soft tires and Magnussen starting with his earlier soft set before a switch to his used mediums.

Romain Grosjean: “It was alright. Surprisingly, my first run of the day I was happy with the balance of the car. After we started to remove downforce things got a bit more fruity. That’s obviously always going to be the game at Spa, being fast on the straights, then getting the corners as good as you can.

“We’re just evaluating which downforce we’re going to run for the weekend. We’re working really hard to find out what we can do better for the future. I hadn’t run the Hockenheim package until today, and it’s better than the Barcelona one – so my confidence came back up on that package, which is good. It’s very low downforce here though, so it’s always going to be quite complicated.”

Kevin Magnussen: “It was a bit of a difficult day, definitely not the best Friday we’ve had in a while. We’re really lacking pace and just struggling with the car and the handling. So, we’ll see if we can fix it, or fix some of it, but it’s been a tough start to the weekend. We’re going to do our best to come back.

“This is a difficult track to get the downforce levels right, it’s also very difficult for us to make the tires work – that adds another element to our decisions on the aero and the rest of the set-up. If your tires aren’t working, that’s the most important, and they’re not. We need to see if we can fix it. We also didn’t get out for proper long runs today, so there’s more to learn there. Fingers crossed we’ll have a better day tomorrow.”

Guenther Steiner, Team Principal: “Not a very successful FP1 and FP2 for us, we are struggling a little bit on these low downforce tracks. We just need to work as best as we can to get the best out of the car. We never give up, we try to do the best, and hopefully we can get something out of it.”