IndyCar and Pocono must make tough decision over future 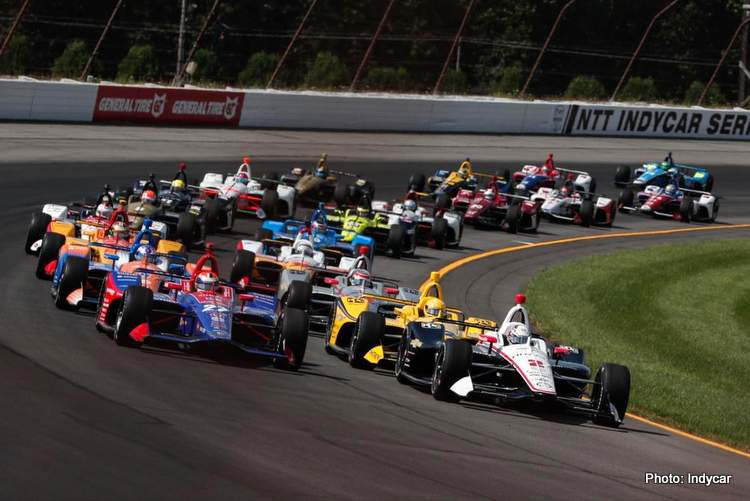 The same message is repeated at least once a year — after a frightening crash, an injury, the death of a driver — that racing at high speed anywhere is inherently dangerous.

Scott Speed, a former NASCAR and Formula 1 driver, broke three vertebrae on a hard landing during qualifying last weekend for the American RallyCross Championship Nitro World Games in Salt Lake City. He has been hospitalized in Utah.

Speed’s injury didn’t get nearly the same attention as an IndyCar crash two days later at Pocono Raceway that reignited a debate on the compatibility of the Pennsylvania track and the open-wheel series.

Justin Wilson died of a head injury in 2015 when he was hit by debris from another car at Pocono. Robert Wickens suffered a spinal cord injury that has confined him to a wheelchair when his car sailed into the fence last year.

Then came Sunday’s opening lap debacle, a five-car accident that sent one driver to the hospital, altered the championship race and put Pocono square in the crosshairs of critics who don’t want Indy cars hurtling around the 2.5-mile oval at 200 mph.

Felix Rosenqvist complained of back pain and a headache after his car hit the fence in the crash. He was released from the hospital and is awaiting IndyCar approval to race again this weekend.

“Definitely feel lucky escaping without any serious injuries after visiting the catch fence there,” the Swedish rookie posted on social media.

The other four drivers involved in Sunday’s crash were not hurt — Alexander Rossi’s quest to win his first championship took a serious blow — but that didn’t stop a slew of complaints about racing at Pocono. Some of them came from Wickens, who called the relationship between IndyCar and Pocono “toxic” and in need of a “divorce.”

The situation might have been headed that way anyway as the series and the track don’t have a contract for 2020, so it would be easy for both sides to just walk away from this tumultuous seven-year run. It’s not the solution sought by the three podium finishers, all series champions, who in unison supported Pocono remaining on the IndyCar schedule.

“It’s a great oval for us. Obviously some unfortunate accidents here … that could happen anywhere,” race winner Will Power said. “Kind of got a bad rap for that. It’s a good racetrack, man. A good track for racing. I really hope we come back, I do.”

Five-time IndyCar champion Scott Dixon said “I feel bad for Pocono” and pointed to on-track driver error for its spate of spectacular crashes.

“If you look at Justin or Robbie, those can happen anywhere,” Dixon said. “I think the drivers in a lot of situations can do a better job to help that situation.”

And Indianapolis 500 winner Simon Pagenaud said he loves racing at Pocono but acknowledged “when you’re travelling at such high speed, you know a crash is going to be a big crash.”

What happened Sunday began even before the green flag. Replays clearly show multiple drivers fanning across the track in a frantic bid to pick up positions before the green even waved. Ryan Hunter-Reay, who wound up with Takuma Sato’s car on top of his, cited the importance of track position and difficulty in passing for the over-aggressive start.

When Hunter-Reay, Sato and Rossi wound up three-wide flying into the second turn, something bad was bound to happen. It was too early and no 500-mile race has ever been won on the first lap. Most think former Indy 500 winner Sato was egregiously at fault, but Sato thinks Rossi raced too hard and no matter where the actual blame falls everyone could have and should have raced smarter at the start of the race.

Alas, that is not the nature of a race car driver. So accidents happen, sometimes with devastating consequences. Drivers make mistakes, equipment fails and tracks can present dangerous conditions.

Those are the stakes every time a race begins anywhere in the world. Every driver knows and accepts this, and when they don’t want to do it anymore, they don’t. Max Chilton earlier this year said he’d no longer race ovals. Ed Carpenter only races on ovals.

Walking away would probably be the smart financial move for Pocono. The track was such an important part of open-wheel racing through the 1970s and 1980s but can’t be breaking even as it hosts IndyCar in its proud effort to support the series.

But there aren’t any other ovals courting IndyCar right now, and the loss of Pocono would leave the series with only four races, not on street or road courses (the 2020 schedule has not been announced).

One of those tracks is Indianapolis Motor Speedway, where there have been 73 fatalities since 1909 including 42 drivers. Nobody wants to drop that race from the schedule.

It’s up to IndyCar to push forward with its safety innovations and ensure its cars are compatible everywhere it races. A small deflector added in front of the cockpit earlier this year may have worked in stopping one of James Hinchcliffe’s tires, and a full cockpit-protecting aeroscreen is coming next year. But IndyCar needs its cars to stay on the ground, and Rosenqvist’s airborne car Sunday is a troublesome as anything that might be wrong with Pocono.

IndyCar and its drivers need a candid discussion on the risk versus reward of returning to Pocono, and track officials need to decide if it’s even worth the hassle. Pocono next year is hosting a NASCAR doubleheader, a large enough endeavour without also opening the gates for an IndyCar Series that maybe shouldn’t be there.

There’s no easy answer to this, and losing Pocono is going to be a blow to IndyCar if it can’t replace the race. The question is whether it’s worth it anymore.