Mercedes: What an unbelievable comeback 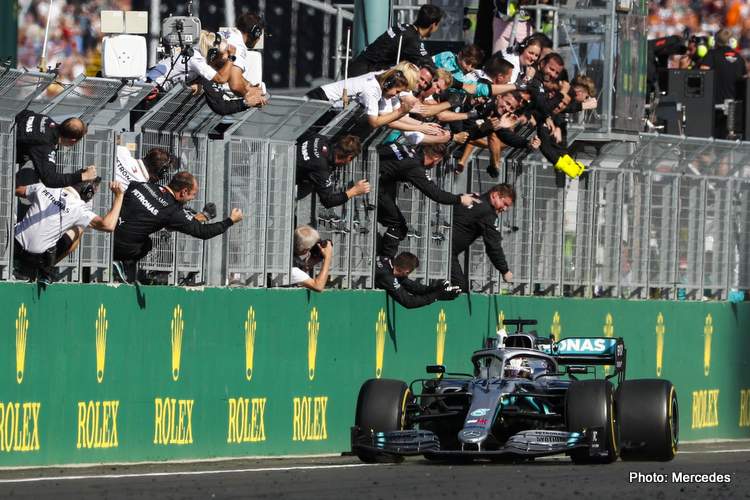 Mercedes report from the Hungarian Grand Prix, Round 12 of the 2019 Formula 1 World Championship, at Hungaroring near Budapest.

P1. Lewis Hamilton: “We’ve been together for seven years, but this feeling never gets old. If it wasn’t for everyone here and back at the factory, this wouldn’t have been possible. I’m so grateful to be a part of it and for the team for continuing to believe in me, push the limits and take a risk. We struggled a little with the brakes today, so I was trying to save as much as I could for when I had a chance to pass Max.

“It was very, very difficult to get by. I wasn’t sure if I could close the 19-second gap, but the team said to just get your head down, so I did. I kept pushing, the gap closed and the laps were like Qualifying laps. I was on the limit all the way. I take my hat off to the team and I think if Niki were here today, he would take his hat off too.

P8. Valtteri Bottas: “That was a tough day and not what I expected. Far from it. The first lap was a bit messy, I had a lock-up at Turn 1 which was my mistake. I was trying to brake as late and as hard as I could, but I locked the front-right and picked up a flat-spot. That caused a bit of understeer and then obviously I had the contact with Charles, which broke the front wing.

“We had to stop early as a result and that really compromised my race, as I came out in traffic and lost a lot of time. I tried everything I could, but it was really tough to overtake. At least I got some points but we’ll analyse what happened and learn from it.

Toto Wolff: “What an unbelievable comeback. This is why we love the sport, you are holding onto moments like this, where it’s an unexpected result and this is why it feels so great. We didn’t think it would go this way but the strategy team did so well and made great calls. There was a specific point in the race where we weren’t sure if Lewis would catch Max, but he got his head down and once the Red Bull was in sight, we knew he’d pounce.

“An incredible drive and a great result to head into the summer break with. On Valtteri’s side, it was a disappointing day. He was so pumped for the race and his Qualifying performance was great. But, the first lap didn’t go well and from there it was tough for him to fight back through the field. It has been a fantastic first half of the season, with 10 wins from 12 races. We will use the break to recharge our batteries – and hopefully return even stronger in Spa.

Andrew Shovlin: “A fantastic win and a great way to finish for the summer break. The race didn’t start the way we’d hoped. Valtteri suffered front wing damage when Charles cut across him at turn three. We couldn’t really run for long in that condition without risk of a bigger issue so we decided to stop for hard tyres and a new wing but from that point on, it was just a case of salvaging what we could with Valtteri.

“There’s no way we would have managed to take the Hard tyres to the end of the race with Valtteri so we converted to see if we could overtake on fresher rubber. It was a shame not to have recovered more with Valtteri, but this is such a difficult track to try and recover positions on. We had more decisions to make with Lewis and the race against Verstappen was made more difficult by only having one car at the front. In the first stint there wasn’t really an opportunity to get by but keeping at Max’s pace was not too difficult and Lewis was able to keep his tyres in good condition.

“By staying close we managed to force them into stopping earlier than they would have liked and that ultimately created the opportunity to go for the two-stop. We weren’t sure whether it would work or not; it’s always a bit of a gamble but we thought there was a risk of them running out of tyres and it did at least prevent Max from being able to manage his tyres as he might have liked.

“Lewis did a great job in the final stint, to pull back a full pitstop gap is never easy but he managed it brilliantly and made a really nice clean overtake. This hasn’t been the easiest pair of back to back races, Hockenheim was really tough on the team but it’s great for everyone to be able to go into the summer break with a win.”