Ferrari: Not surprising that we were fourth and fifth 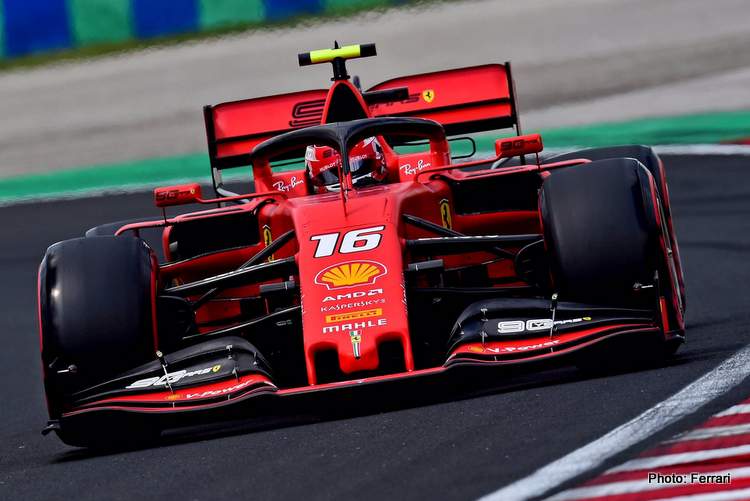 The Scuderia Ferrari drivers will start the 34th Hungarian Grand Prix from the second and third rows of the grid, when the race gets underway at 15.10 CET tomorrow.

Charles Leclerc was fourth fastest in 1’15”043 and Sebastian was fifth with a lap that was just 28 thousandths of a second slower than his team-mate’s.

Q1. In the first part of qualifying, the Monegasque and the German easily made the cut to Q2 with time of 1’16”337 and 1’16”452 respectively. But on his second run, Charles made a mistake, crashing into the barriers on the outside of the final corner. The driver of the number 16 car managed to get back to the garage where the mechanics rushed to change the rear wing, and made repairs to other parts that had also sustained minor damage.

Q2. Charles was therefore able to carry on as normal in the second part and both he and Sebastian fitted medium tyres. Leclerc’s first run produced a 1’15”807, which he then dropped by 15 thousandths to 1’15”792. Sebastian made it through to the top ten shoot-out with a 1’15”885 set on his first attempt. It means that both drivers start the race on the Medium compound.

P4. Charles Leclerc: “On the one hand, I am happy with my lap in Q3. On the other, the mistake I made in Q1 was unnecessary and I will make sure that it doesn’t happen again. The team did a great job to get the car back in shape for us to go out in Q2. I believe that we got the best result we could today.

“So far this weekend, we have been lacking grip. Our competitors are strong, especially in the corners, and it will be a difficult race for us tomorrow.”

P5: Sebastian Vettel: “Today went pretty much as we expected and reflects what we have seen in the last few races. Our car is very quick down the straights but it’s not the best through the corners and that means we struggle to keep the tyres alive right to the end of the lap when we are trying for a quick time.

“You can see that from the fact we are quickest in sector 1 and then we suffer over the rest of the lap.
In fact, it will be a very difficult race in terms of tyre management and given the characteristics of our car, it would suit us to see high temperatures tomorrow, because we would then be able to put our competitors under pressure.

“If that’s not the case, then it will be a one-stop race and it’s less likely that we can be in with a chance. Overtaking is difficult here, but not impossible, so let’s wait and see how things go tomorrow.”

Mattia Binotto Team Principal: “It’s not surprising that we were fourth and fifth fastest today. We knew we weren’t favourites here, given the level of aero downforce generated by our car at the moment.

“Here in Hungary, we were keen to confirm our progress and see where we stood compared to those ahead of us. The gap is closer than we might have expected and to a certain extent, that’s encouraging. We therefore had further proof today that we are on the right path in terms of our development of the SF90.

“Seb’s qualifying was straightforward, but Charles’ was slightly compromised by the accident in Q1. We changed the rear wing, but there were still some damaged parts left on the car and maybe he also lost a bit of confidence in that final corner.”