Haas: The result looks better than it is 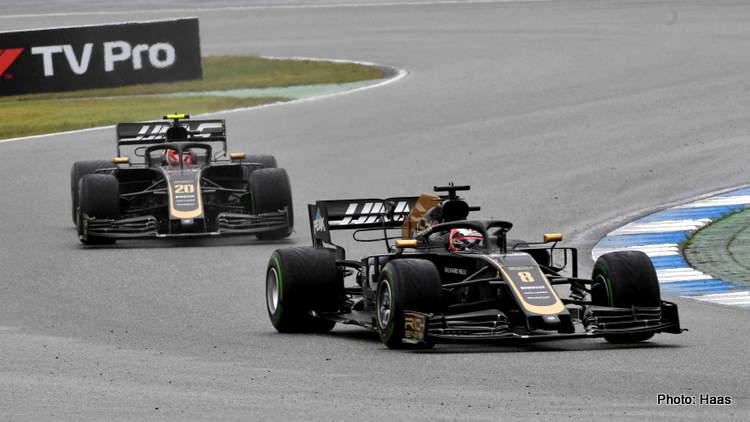 It was a race that began in wet and rainy conditions, dried ever so briefly in the early going, then finished in dry conditions around the 4.574-kilometer (2.842-mile), 17-turn circuit, and one that saw several drivers from Formula One’s heavy hitters, including Mercedes, Scuderia Ferrari and Red Bull Racing suffer day-ending incidents or struggle to stay ahead of the conditions.

Grosjean and Magnussen started sixth and 12th, respectively, on sets of Pirelli P Zero Blue rain tires, as did the rest of the 20-car field under light showers, and they did well to stay out of trouble in the early going.

A lap-three incident brought out the day’s first safety car and sent much of the field to the pits for Green intermediate tires, including Grosjean from seventh place. Magnussen, meanwhile, was one of six drivers to stay out on wet tires and moved all the way up to second place behind pole-winning Lewis Hamilton of Mercedes.

Magnussen struggled to keep pace with those behind him on intermediate tires and dropped back to sixth before pitting on lap nine for his own set of intermediates. Grosjean, meanwhile, moved up to 11th from 16th, where he resumed after his initial pit stop.

As the track began to dry, competitors began to file into the pits for the slick Red soft tires, including Magnussen on lap 24 and Grosjean on lap 26. By lap 29, light rain had fallen again, and the Haas drivers returned to the pits for intermediates., which they utilized over the next 25 laps.

With today’s results, Rich Energy Haas F1 Team remained ninth in the constructors’ championship with 19 points, 12 behind eighth-place Racing Point and 19 ahead of 10th-place Williams.

P9: Romain Grosjean: “I’m very happy with the double points finish. It was obviously a bit of a crazy race. I don’t think we’ve quite sorted our race pace. When you see the midfield being in front of us and only the Williams behind. Anyway, we survived when we had to survive, but it was very difficult.

“You saw all the top guys going out and off the track – conditions were very tricky. I’m happy to have a double points finish, but when you see a Toro Rosso on the podium, you wish you were there. With all the experience we have, we should be able. It’s just that the race pace on inters and slicks wasn’t good enough.”

P8: Kevin Magnussen: “It was a very crazy race. It was entertaining and exciting all the way through. There are always hard decisions to make with all the changing weather, having to decide the tires and so on. The way we earned the point today was to be good on the dry tire in the mixed conditions.

“That’s when we made up on the opposition. In the dry we didn’t have any pace, so we fell back. At least we got both cars in the points, I don’t think we could have done that in the dry.”

Guenther Steiner, Team Principal: “The result looks better than it is. Our speed was just not there, but we kept out of trouble. In the end I would say we got everything out of the situation we were in. We just need to keep on working.”

Round 12 of the 2019 FIA Formula One World Championship is the Hungarian Grand Prix at Hungaroring in Budapest. Practice begins Aug. 2, qualifying takes place Aug. 3 and the race runs Aug. 4.

UPDATED CLASSIFICATION: As both Alfa Romeos received retrospective 10 second stop-go-penalties (30 seconds added to their race times), due to a breach of Article 27.1 of the FIA Formula One Sporting Regulations, our #GermanGP race classification is now 7th and 8th. pic.twitter.com/628vm4v8fy