Honda: We must say sorry to Max 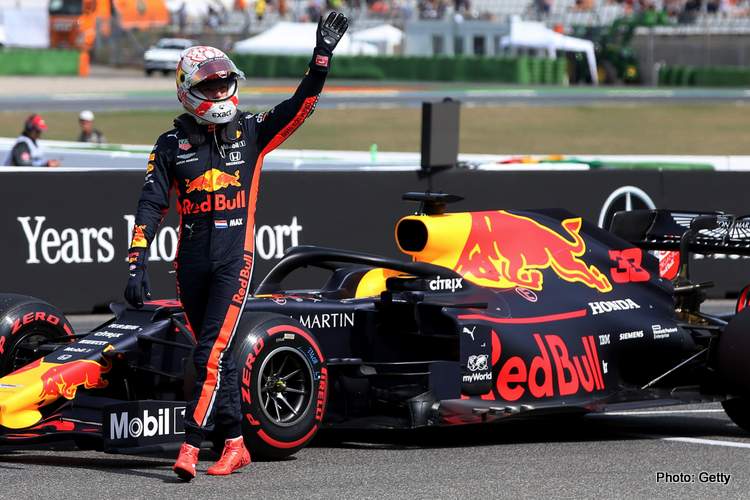 It’s all to play for at the German Grand Prix with a Honda-powered car on the front row at Hockenheim after a dramatic qualifying session.

Aston Martin Red Bull Racing were competitive throughout Saturday’s running and advanced with both cars through to Q3, as Pierre bounced back well from his accident on Friday to make comfortable progress.

Alex was unfortunately eliminated in Q1 as he was held up behind Lando Norris on his final attempt, preventing him from improving, while the second Toro Rosso will start from 14th as Daniil dropped out in the second part of qualifying.

That left the two Red Bulls to battle for pole position in the top ten shootout, and with neither Ferrari able to run due to reliability issues, it became a straight fight with Mercedes.

Max provided an excellent first lap to take second on the grid and was improving on his final attempt before fading in the final sector. Pierre was also in the mix for pole position on his last lap, but ran slightly wide out of the final corner and had his time deleted, having originally been 0.067s off Max.

The decision does not alter his starting position of fourth place, however, as both Red Bulls will line-up in the top four on Sunday. Our best start since the San Marino Grand Prix, back in 2006.

Toyoharu Tanabe, Technical Director: “It’s great to have Max on the front row and Pierre right behind him on the grid in a career best fourth place. It means we can expect to have a very good race tomorrow.

“However, we must say sorry to Max, as there was a problem with the PU settings when we tried a different mode in Q2, which did not work. As for Toro Rosso, Alex was unlucky to encounter traffic, so we will have to see if they can move up the order tomorrow. There is a chance of rain tomorrow, so we must now prepare for every eventuality.”