Ferrari: The feeling in the car was good 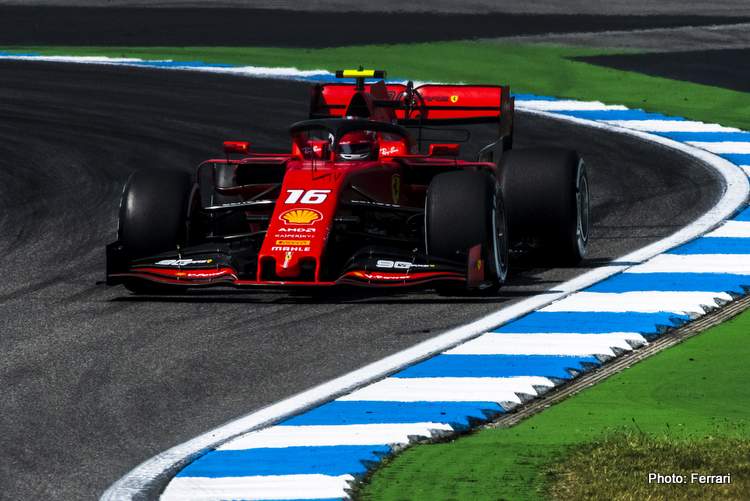 Sebastian Vettel and Charles Leclerc got through all their planned programme for the two Friday free practice sessions in preparation for the German Grand Prix.

They also topped the time sheets on a day when Hockenheim was a veritable furnace with the air temperature reaching 38 degrees, while the track temp hit 52.

FP1. In the first session, Sebastian and Charles ran the Soft tyres, working on finding the best car balance for qualifying and the race. They also assessed various aero configurations, while simulating different phases of the race. Overall, the two drivers did 46 laps, 21 for Vettel, with a best of 1’14”013, while Leclerc did 25, stopping the clocks in 1’14”268.

FP2. In the second 90 minutes, when air and track temperatures shot up, Charles and Sebastian began with a qualifying simulation to set their best times of the day in 1’13”449 and 1’13”573 respectively. The team then began working in race trim, with Leclerc running the Medium tyres and Sebastian the Hards.

Programme. The third free practice session in preparation for qualifying begins at noon, while the grid-decider begins at 15.00 CET, when the forecast is for quite a high risk of a thunderstorm. There is less chance of rain on Sunday (the race will start at 15.10), but the temperatures are due to drop.

Sebastian Vettel: “I am happy with how today went. It took me a short while before finding the rhythm. We lost a bit of time in the first session when running the Mediums because of a red flag.

“I don’t know what programme our rivals were on, and how much they had to turn down the engine mapping because of the heat. It would be nice to have this weather on Sunday.

“Overall, it was a positive day, mainly because we have understood how to manage the car in these conditions. We got through all our programme aimed at having the car in the best possible set up and we have to continue down this route tomorrow when track conditions and the weather could be very different.”

Charles Leclerc: “It was a positive day overall. The feeling in the car was good and we performed well during the high-fuel runs, which was one of our main challenges at the beginning of the season.

“High temperatures, such as those we saw today, suit our car well. It seems that there may be a change in the weather conditions tomorrow and on Sunday, which we will adapt to.

“Over the past few weekends, our competitors only revealed their full potential in qualifying. We must keep our heads down and continue working on optimizing our performance on this track. I look forward to being back in the car tomorrow and will give my best to put it on the front row.”