Leclerc: I’m happy we can now race like this 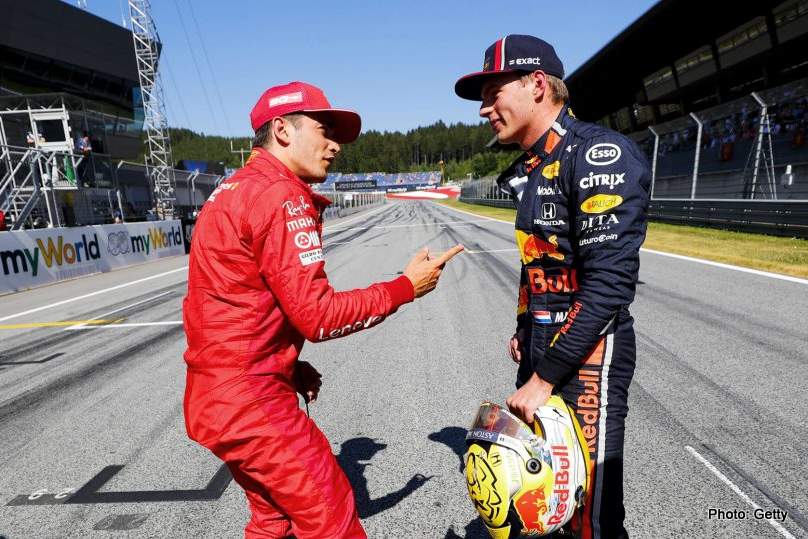 Ferrari driver Charles Leclerc admitted ahead of the British Grand Prix weekend that he was unhappy with the way Max Verstappen got past him to win the Austrian Grand Prix a couple of weeks ago, and in fact relishes the prospect of racing hard as he did against his Dutch nemesis.

For fans, it was riveting stuff as Leclerc and Verstappen battled wheel-to-wheel for the lead of the race, with the latter coming out on top and winning at the Red Bull Ring.

Race stewards took a three-hour look at the scuffle before ruling it to be a racing incident. However, in the immediate aftermath of the race, Leclerc was peeved and his body language reflected his mood.

But at Silverstone, the 21-year-old was clearly over it when he reflected on the incident, “At that moment, I felt it was frustrating. Looking back, I’m happy we can now race like this.

“As drivers, we always try to be as close as the rules limit us, so I will definitely change a little bit and adjust a little bit my aggression.

“I think with that incident, I don’t have any problems and it was very easy for me to move on. The only think I would like is a bit more consistency. I feel like there have been other incidents in the past, which have been less big in a way, and have been penalised.

“If we can race in that way, then I’m more than happy to race that way. I think it’s good for Formula 1. I think this is what us drivers want, but we just need to know what we can expect from the others, and that’s why we need consistency over penalties.

Ferrari have still to post a victory this season, with Leclerc coming close on more than one occasion which suggests that there is race winning potential in the SF90.

“I think it was a good few races even before Austria,” explained Leclerc. “At Paul Ricard – Mercedes was very quick but our race pace was very compromised. Canada, we seemed to be a little bit better but I still expect Mercedes to be very, very strong this weekend. A lot stronger than they were in Austria.

“It might be a more difficult weekend but we’ll give it everything and hopefully [get] a good result at the end of the weekend,” added the Monegasque who lies fifth in the drivers’ standings at the halfway point in the season.