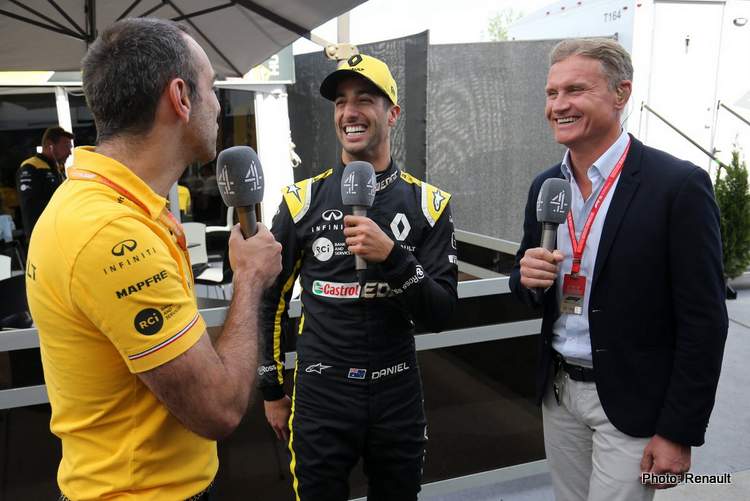 Daniel Ricciardo hopes to put on a show at Renault’s home French Grand Prix this month after the team doubled their season’s points tally in Sunday’s Canadian Grand Prix.

The Australian finished sixth in Montreal, the seventh race of the year, with German team mate Nico Hulkenberg a close seventh.

“I’m sure if you’d said to Cyril [Abiteboul] before the weekend: how does this result sound? he would have probably kissed you. I think we’ve got to be really happy with that.”

Renault were eighth overall in the championship before the seventh round of the season but moved up to fifth, on 28 points and just two behind McLaren who use the same engines.

Sunday was the team’s first double points finish of the campaign.

The next race up is Le Castellet on June 23, with Renault hoping to show clear progress by then after a difficult start to the season.

Abiteboul told reporters in Monaco last month that Renault had fixed a fundamental engine problem that had slowed both Ricciardo and Hulkenberg and they were now back to full power.

“We’ve certainly got some momentum now and the last few weekends have been stronger,” said Ricciardo, who joined from Red Bull at the end of last season. “We’ve got a few new parts coming.”

The Australian said he had also been buoyed by keeping Mercedes’ Valtteri Bottas, second in the championship to teammate Lewis Hamilton, behind for a number of laps and making him fight to get past.

“I think the encouraging thing was for sure a few elbows out with Bottas,” he said. “Our straight-line speed is certainly much more competitive in race conditions. A lot of positives to take.

“We’ll see how we go in France. (Hopefully) for the Renault home fans we can pull off another good one,” added Ricciardo.