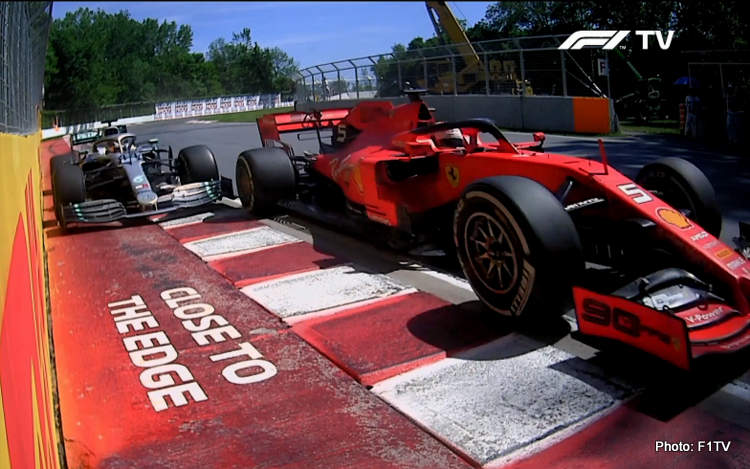 #MsportXtra gives his opinion on a controversial Canadian Grand Prix, sharing his perspective of the penalty that cost Sebastian Vettel and Ferrari their first win of this season and gifted victory to Mercedes driver Lewis Hamilton.

He also tackles the extra bits on the fringes of the headline story of the weekend in Montreal.

The Canadian Grand Prix… Where to begin? On Friday, it seemed as if Mercedes were in some trouble, and Ferrari finally got their act together with Red Bull was pretty much in the mix with both drivers.

The midfield wasn’t even far off either and with the new Spec-2 engines from Mercedes, even Williams wasn’t miles off the midfield. Then Saturday came and things started to shift.

Ferrari pulled it off to be the fastest, Mercedes were close on their heels but somehow, but Red Bull didn’t get their act together and lost ground. Renault surprised a lot of people, just as both McLarens did. Haas couldn’t find the sweetspot and Grosjean didn’t make Q3 while Magnussen put his car in the wall, causing Verstappen to drop out well because he couldn’t improve anymore to go through to Q3.

The stewards dictated the outcome of the race

On Sunday, just before the start, there was a lot of work still going on Hamilton’s car and even on the warm-up lap he suggested he might have had some issues but the team answered told him all was fine.

Lights went out and after a bit of pushing and shoving, the top ten remained pretty much the same. I have to admit that the first stint of the race, it looked like it would be another bore-fest and everybody was waiting on pitstops to see how strategies would pan out.

Verstappen on the hard tyre started in ninth and only overtook Norris but at one point he was fifth on the road because others had to pit. Soon it became clear that Hamilton and Vettel would be the focus of the race as they kept each other honest while pushing to a higher level. The gap between both of them stayed between a half a second and 1.3 seconds.

Leclerc in third was a bit behind and Bottas was more or less in no man’s land. The second stint after the pitstops was more entertaining as drivers on a new set of tyres were able to fight and overtake.

Hulkenberg and Ricciardo held their own and did a great job throughout the race.

The climax came when Vettel had an issue with his steering-wheel telemetry [unconfirmed] and while I’m not sure if certain settings were a part of it, he made a mistake and went wide onto the grass where he found no grip and slid back onto the track where Hamilton was ready to make a move.

However, Vettel managed to regain control of his car and was very lucky to stay ahead of Hamilton, even though the Mercedes driver had to brake to prevent contact. It did, however, mean that the incident was put under investigation by the stewards.

But [I would imagine] most people watching, including myself, would put it down to a racing incident with Vettel probably reprimanded for rejoining the track in an unsafe manner.

Nothing was further from the truth as the stewards did something nobody was expecting. They gave Vettel a five-second time penalty and by doing so, dictated the outcome of the race.

During the final few laps, Vettel tried everything to stretch the gap to 5.1 seconds over Hamilton but the Mercedes driver knowing he didn’t have to overtake anymore [to win the race] chased the Ferrari so that the gap remained around half a second.

Vettel crossed the finish line in P1 and Hamilton P2 but with the penalty, Vettel dropped to P2 and Mercedes won their seventh race this year. That makes it seven out of seven so far.

Starting Friday, I really thought both drivers were on it but after Saturday, that all changed. Come race day, Gasly started fifth while Verstappen started ninth. As we all know by now, the top three teams are more likely to end up at the top six positions so the aim was a P5 and P6, hopefully not far off the Mercedes and Ferrari.

While Verstappen did what he had to do and finished 5th (57.655 seconds off the leaders), it was Gasly who went backwards again and came home in a lonely eighth, even being overtaken by both Renaults. Not every circuit is the same so it might have been the characteristics of the Canadian track but last year they did well, this year not so much.

Listening to Verstappen, he explained that last years car was better than this year’s car, not even talking about the engine, purely the car. That said, they might have a fundamental issue that can’t be fixed with little updates and they remain the third fastest team on the grid.

However, I still feel Gasly needs to do more to bag points for the team as the Toro Rosso boys show potential and are waiting for a chance in the Red Bull.

Have Renault found the cure?

Renault had a solid race and to finish sixth and seventh, taking home a good haul of points. Still, I don’t think they are there yet and wouldn’t be surprised if in France, they hang around 10th to 13th place again.

Canada was good to them but I can’t help thinking it could all be different if Norris didn’t DNF or Magnussen didn’t have to start from the pitlane. At least their engine didn’t have an issue (as far as I know) so hopefully, they can keep the progress going.

Close as it gets in the midfield

The midfield is so close this year and with a Racing Point in ninth, a Toro Rosso in tenth and a McLaren in 11th, it showed once again that you can’t predict ‘Best of the Rest’ from one race to the next.

In Canada, it was Haas who stumbled to 14th and 17th finishes while Racing Point got their groove on and came home in ninth and 12th. Both Alfa Romeo’s were pretty much invisible all weekend and with a 13th and 15th finish, they need to do their homework to get back up to speed.

The upside and the downside

That’s a short one. I thought the upside of the weekend was to see Ferrari back up there and finally not making any strategic failures. The downside for me was Red Bull. They just couldn’t keep up, they went backwards unable to hang on to Mercedes and Ferrari. At Mercedes, Bottas never really matched up to Hamilton the whole weekend.

It wasn’t the busiest weekend which might have been due to the time difference with Canada but from the start of the weekend, Ferrari received lot of positive feedback.

Of course, at the end of the race, social media blew up with a lot of opinions about the stewards and the penalty Vettel recieved.

Personal thoughts on the Vettel penalty?

I have to say, this is my personal view and I am not saying that my view is the correct one. I am not here to discuss right or wrong, just to share my own opinion so bear with me.

In my view, and as broadcasted on the world feed, Vettel seemed to have an issue with his telemetry shown on his steering wheel. I have a feeling a certain setting wasn’t correct and due to a loss of focus or as a result of that wrong setting, he went wide and off track.

On the grass, with slick tyres, he had zero grip so Vettel had a hard time trying to regain control of his Ferrari. Going over the kerb and back on track, he did his best to keep all four wheels within the white lines and after he managed that, had a quick look in the mirror to see where Hamilton was.

In my opinion, when he realised Hamilton was rather near to him, he steered even more to the left to give Hamilton enough space.

There was no contact, also because Hamilton braked to avoid any. I don’t believe Vettel rejoined the track at that spot on purpose but purely because the car slid that way. To me, it was a case of “no harm, no foul” but since F1 is over-regulated, something had to be done.

If it was me, I would have checked a few things:

Thing is, we have different stewards with different views and since the precedence was set after the contact between Verstappen and Raikkonen in China last year, a punishment was needed.

In my opinion for the transgression on Sunday, I would’ve given Vettel two penalty points on his licence and a reprimand or a fine for the unsafe rejoining. Again, this is my opinion and you don’t have to agree with it…

Now we move on to France and hopefully the Paul Ricard circuit will give us an awesome weekend so I can share more thoughts on #TheXtraLap.