Haas: It was all okay until it all went wrong 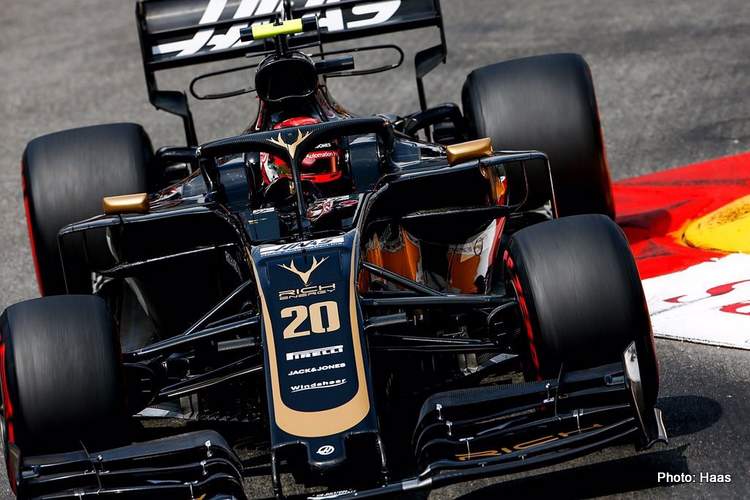 Q2 looked promising for both Magnussen and Grosjean until the final seconds were ticking off the clock to end the session. Magnussen had logged the 10th-fastest lap of 1:11.786 and was looking to improve upon that when, exiting the turn 13-14 chicane onto the front straight, he first contacted the right-side wall, then spun across the track and made heavy contact with the left-side wall, ending his day.

Magnussen remained 10th, his career best in five qualifying efforts at Montreal, but was unable to participate in Q3 with his fellow top-10 qualifiers due to the extensive damage to his racecar.

The incident cost Grosjean a potential top-10 lap, which he was forced to abort when he came up on the aftermath of Magnussen’s contact with the wall. A lockup in turn six on Grosjean’s previous flying lap of the session forced him to abort that lap, as well. He did not record a time in Q2, leaving him in the 15th position.

Both Magnussen and Grosjean ran exclusively on the Pirelli P Zero Red soft tire throughout qualifying.

Taking the pole for the Canadian Grand Prix was Scuderia Ferrari driver Sebastian Vettel. His fast lap of 1:10.240 eclipsed by more than a half-second his own track record of 1:10.764 set in Q3 last year and was good for his 56th career pole, his first of the season and the fifth of his career and second in a row at Montreal. It was .206 of a second better than outside-front-row qualifier Lewis Hamilton of Mercedes.

Romain Grosjean: “It wasn’t the best of luck again. It’s not been an easy day. We had a broken rear wing in FP3, which meant we headed into qualifying having not run the soft tires today. Q1 went okay, then in Q2 I played for the full aggressive strategy – going for one-timed laps.

On my first attempt I locked up at turn six, so I couldn’t finish the lap. My second attempt was obviously then red flagged. Maybe we should have played it a bit more conservatively, or I should have asked for it, but I was happy to go for one-time, one-time in the session. So, that’s a bit of a shame. I don’t know if we’d have made it into Q3, but maybe just outside the top ten. It would have been a nice position for tomorrow.”

Kevin Magnussen: “I just hit the wall – broke the rear suspension, then it shot me over to the pit wall in a big crash. We were fast, we made it to Q3, and I was improving. I was just trying to push everything, as I knew it was going to be tight. I went on the power a little too early, and everything followed from there. I’m very sorry for the team. They have a big job to do now. We’ll probably start from the pit lane tomorrow, but they deserve better.”

Guenther Steiner, Team Principal: “It was all okay until it all went wrong. It just doesn’t seem we can catch a break here. The performance of the car was better than we expected over the whole weekend to now. Unfortunately, in Q2 qualifying Kevin (Magnussen) crashed heavily, and that compromised Romain’s (Grosjean) lap as well, as he was right behind him.”

“But, as I said, it doesn’t seem we can catch a break in the moment. We’ll just keep on working hard to get back to where we should be. The car is fast. We didn’t expect it to be this fast, as this has been one of our weaker circuits, at least that’s what we had anticipated. We’re optimistic looking to the next races, we just need to try to get a little less unlucky.”