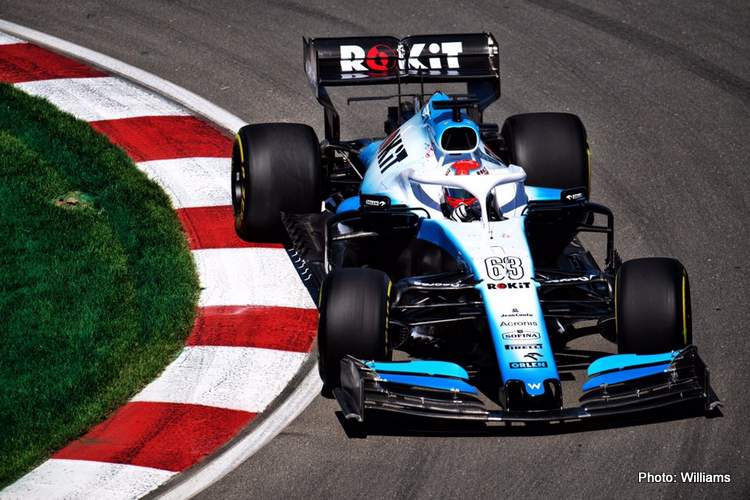 Williams report from day one of the Canadian Grand Prix weekend, Round 7 of the 2019 Formula 1 World Championship, at Circuit Gilles Villeneuve on the Île Notre-Dame in Montreal.

Dave Robson, Senior Race Engineer: “At the start of FP1 the track was very dirty, making learning very difficult. Fortunately, we were able to gather some data with both cars whilst the track continued to improve.”

“Nicholas focussed on some initial tyre work, running both the Option and Qualifying compounds, whilst George did some early set-up work using two sets of the Option tyres. Nicholas did a very good job in difficult low grip conditions, which was testament to his preparation at the recent track tests and in the simulator.”

George Russell: “I enjoyed driving at the Circuit Gilles-Villeneuve; a new track for me. Our performance was as expected, the low fuel pace was on plan with our high fuel slightly better. It was a bit slippery at times, as anticipated, but overall, I enjoyed it. We have some work to do tonight to see what we can achieve tomorrow.”

Robert Kubica: “The track today was quite slippery. I didn’t expect such conditions as we are sliding quite a lot. When I started the first few laps in FP2 there was a lot of dust, but these conditions were the same for everyone. It is good to be here, I came with a positive mood and there are no dramas but of course there are no big surprises. FP2 we managed to complete what we planned, now we have to do some homework, squeeze the knowledge from Nicholas, George and myself, to try to speed up a bit for tomorrow.”

Nicholas Latifi: “Today was my first FP1 of the season and I felt well prepared as I have had three full in-season test days with the team. For me, everything went very well with a smooth session and we ran a good programme. The track conditions were tricky due to the dust, but I kept the car out of the walls and got some good laps in to gather data for the team. It’s a very special feeling to drive in front of your home crowd. Montreal is the city that I was born in, I have a lot of family and friends here, so it was a special feeling pulling out of the pitlane.”