Dumontier: Almost a miracle to finish new paddock on time 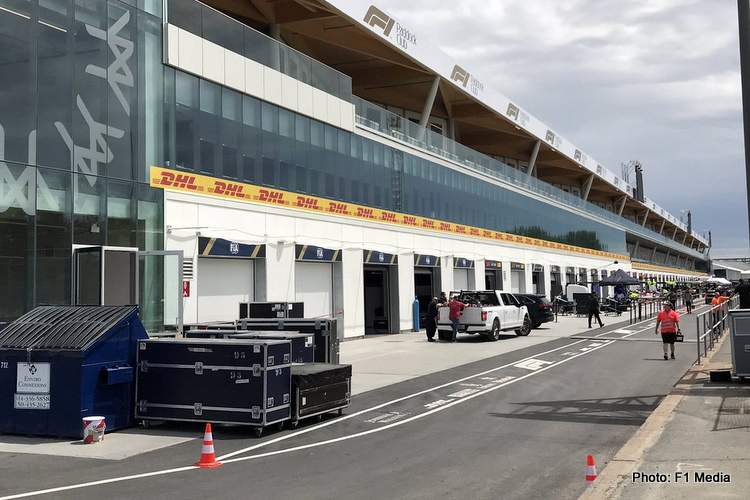 After years of cramped conditions and temporary team buildings, the paddock of the Circuit Gilles-Villeneuve has undergone a massive makeover and this year teams, media and guests will be welcomed to a state-of-the-art, award-winning CAD$60 million (US $45-million) complex.

François, you’ve been waiting a long time to see these new pit buildings constructed. What can teams, media and guests expect from the new complex?
FD: Let’s start with the teams. The previous garages were built as far back as 1988 and F1 has changed massively since then. Those old garages were 40 feet deep and pretty tight. The new ones are 85 feet deep, so we have more than doubled the space for teams. That means no more temporary tents behind the garages. All of their equipment will go inside and they will have access to everything they need.
It’s a similar story for media. To begin with, the old TV broadcast booths, which were on the other side of the track to the paddock are now gone and we have permanent facilities for broadcasters in the new building. The view of the track is great and the facilities are, I think, state of the art. I hope visiting media will also have everything they need.
Finally, in terms of Paddock Club opportunities, the capacity here is now for 5,000 guests. So we have scope to grow the event and we can now offer a state of the art experience to guests.

Demolition of the old buildings started soon after last year’s race and you had just under a year to complete construction of the new complex. Were there any challenges along the way?
FD: It was certainly a challenge. To construct something like this in 10 months, especially with our winter conditions… It’s almost a miracle. And this past winter was a tough one, even for us! But we succeeded. It was a nice challenge and we’re really proud of the final product.

This is a CAD$60 million (US $45-million) project. That’s a serious investment in the event, and in Formula 1. Was it difficult to secure the funding needed?
FD: Every negotiation is a tough one! There was a lot of discussion involved. Just to be clear, the bigger portion of the investment came from the City of Montreal but there was also a CAD$18m investment from the Government of Quebec, so it was a complex process.
But in the end, all the parties were really keen to do it. They understood the importance of building a new facility, not only for the practical reasons of providing teams with great facilities and for hosting guests, but also for the image of Montreal in the championship and around the world. And I can’t wait for the TVs around the world to show the new building. It’s going to be a great store window for Montreal around the world.
It is a signature building, and I think the proof of that is last December the new complex won the Canadian Architect Awards of Excellence. The building has been designed to reflect of the natural environment of the Parc Jean Drapeau but also of iconic structures like Expo 67. We’ve also been very mindful of sustainable development and the building features local materials, there are also photovoltaic solar panels on the roof, a green-roof open terrace and open spaces on the last floor, eliminating the need for air-conditioning.

You mention sustainability. In terms of business model has the facility been designed to be used for events other than Formula 1?
FD: Absolutely. Formula 1 will be the main user of the building, but during the rest of they year, they will rent spaces in the complex for a variety of other events. It will be a great asset for the people of Montreal. For example, the media centre can operate as a multi-functional space, and as far as I understand there are already a number of events planned for the building.

Were there any issues with the track at all? Did you need to modify anything and were there any specific elements that needed to be incorporated to satisfy FIA standards?
FD: No, it went well. During the construction over the winter, we had site visits from the FIA and from F1 so that they could see the evolution and that all went smoothly.
For me, it was really important that we didn’t change the track layout, so we worked within the same perimeter. To give you some dimensions, in terms of the length of the building, I think the building is only 30 feet longer but in terms of the width, as we said, it is much larger. For that to succeed, with the approval of the FIA, we had to make the pit lane 10 feet narrower and we gained 35 feet behind the garage, towards the rowing basin.
The paddock will be ‘cosy’, for sure, but I think that will create a really good atmosphere, particularly on race day.

One of the things the Canadian Grand Prix has always done is give fans access to the pit lane early in the race weekend. With these new facilities will that level of access still be possible?
FD: Of course, and we expect a record crowd on Thursday because of the new pit building. It’s the first time really fans can get close, so we expect a lot of people. We are also extending the time frame of the open house day. Usually, it runs from around 9 to 12, but this year we want to keep the fans in to the activation zone that we will have on site.
We were one of the first grands prix to give this kind of access to fans, almost 25 years ago, so it’s tradition now. We definitely will be welcoming as many fans as possible to get as close as possible to the new pit lane and to their favourite teams. Put it this way, if we didn’t I think we’d get a lot of complaints!

Finally, what does the completion of this project say about Montreal’s commitment to Formula 1, and how excited are you about this weekend?
FD: It’s a huge commitment from all of the stakeholders involved – the city, the Quebec Government, our own organisation.
We’ve had a Formula 1 race in Canada since 1967 and in Montreal since 1978. We are the oldest race outside Europe and everyone is passionate about that tradition continuing. The investment in these new facilities just shows how much Montreal cares about F1 and how much Canada cares about its race.
Back in 2009, we missed a year and when you lose something you suddenly realise how much you love it and how important it is. So, when we came back in 2010, it confirmed the importance of the event. It is the biggest sporting and tourism event in the country. Not just in Montreal, but in all of Canada. We all want that to continue.
In terms of this year, I’m really excited. We are enormously proud of what we’ve achieved here and it gives us an exceptional platform for the future. We still have some works to do, probably for the 2021 race in terms of resurfacing the track, and we will look into that, but for now, yes, I can’t wait to welcome the world to Montreal.