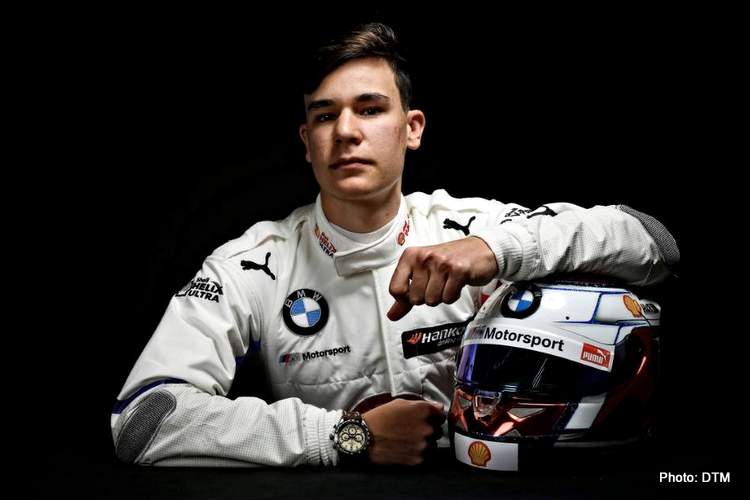 It’s not only the fact that Sheldon van der Linde stands atop the DTM’s rookie standings after just a couple of races in this year’s German series, but it’s also that he’s done so with such emphatic effect.

After just two race weekends, the South African already has a pole position to his name (achieved at Zolder’s Race Two) and has shown both a fierceness and a composure to cause his more established rivals to sit up and pay attention.

Of course, as a rookie – and a tender 20-year-old – he still has a few rough edges to iron out – but who doesn’t at that age? In Zolder’s second race, on fading tyres, he wasn’t quite able to suppress old hands Jamie Green and Mike Rockenfeller from charging past and denying him a deserved spot on the podium. But these are minor wrinkles in an already impressive palmares.

Motorsport in South Africa is very much a family affair. Jody Scheckter’s sons Tomas and Toby raced, as did his brother Ian. There are the Taylors, highly successful in sports car racing with several Daytona and Sebring wins among them. There are the Aberdeins, with Jonathan currently racing in the DTM. And there are the van der Lindes.

Hennie van der Linde was a touring car star in the 1970s and ’80s. Shaun van der Linde followed in his footsteps and, among others, raced successfully with BMW. His nephew Etienne raced single-seaters, and his sons Kelvin and Sheldon kept the family tradition alive, starting in one-make series before soon graduating to GT3 competition, both with Audi.

After success in karting, van der Linde moved into tin-tops, claiming the title in his first season in the South African Volkswagen Polo Cup in 2014, a feat he repeated the following season.

Following in his brother’s footsteps, he then took the decision to pursue his racing career in Europe, like many South Africans before him. He came fourth in the Audi TT Cup in 2016 and used his experience of racing front-wheel driven cars to end up third in the highly competitive ADAC TCR Germany with an Audi RS 3 LMS the following year.

GT3 was the next step up, and he became runner-up in the ADAC GT Masters, racing together with his brother Kelvin.

“But my goal,” Sheldon van der Linde admits, “was always to race in DTM.”

He first visited BMW Motorsport in Munich last summer and was invited to December’s rookie test at Jerez. Shortly afterwards, he was signed as a works driver.

“This has been a dream of mine for so many years,” he says. “When you drive onto the race track, you feel the passion from the fans; you feel a responsibility. At BMW, I feel super happy. It’s my new home, everyone has been very welcoming, and I’ve settled in very well.”

Together with brother Kelvin, his senior by three years, he shares an apartment in Kempten in the south of Germany.

Was there any kind of competition between the two about who would be first to land a DTM seat? “Not really,” he says. “There was no seat available at Audi for this year, so I had to look somewhere else. He opted to stay with Audi in GT.

“We both wanted to be DTM drivers. I would say we’re at an equal level, but I just got the good fortune with BMW. And I’m very thankful for that opportunity. It’s pretty cool to keep the family tradition alive with BMW. I see a long future ahead with them!”

During the season opener at Hockenheim, van der Linde already rewarded the trust BMW had placed in him by taking sixth position and scoring points in his first-ever race in the series.

At Zolder, he doubled up by claiming his maiden pole position in only his fourth DTM race.

In the race, he held third position until the very last lap when Jamie Green and Mike Rockenfeller, both running on fresher Hankook rubber, went past to claim third and fourth positions.

“Of course, it would have been nice to get on the podium,” he says, still smiling. “But we can still be happy – and that performance gives us a lot of motivation.”

Interestingly, van der Linde’s career path shares a lot of similarities with that of another DTM driver, 2017 champion René Rast. He, too, won the title in a domestic Volkswagen Polo series and climbed the ladder via a variety of one-make series.

That’s not the only thing van der Linde and Rast have in common: they both share the same manager, former racing driver Dennis Rostek. “René and I are good friends, we regularly speak about many things, both racing and non-racing. Together with Dennis, we have a nice little WhatsApp group…

“But out on the track, it’s everyone for himself, of course.”

Sheldon’s boss Bart Mampaey feels confident the South African is the real deal: “For his age, he’s really mature,” he says. “He not only has a lot of talent behind the wheel, and is a very fast driver, but he’s also a quick learner – and a great personality.

“He’s like a sponge, taking in everything that’s new for him about DTM. From the word go, he’s gelled very well with our team. It’s really great to have him with us and to work with him.”

While van der Linde has impressed everyone so far, he hasn’t allowed those early successes to go to his head: “I’m still a rookie,” he admits. “I’m well aware that I still have a lot to learn. Happily, I know that the speed is there, so I’m just looking forward to the races to come.”

Although the traditional route to Formula 1 is through the single-seater feeder series starting from Formula 4 followed by Formula 3 and finally Formula 2 where the next generation of F1 stars can show their talent and hopefully be selected by a big team.

However, Mercedes have used DTM in the past as an alternative route to the top tier with the likes of Pascal Wherein and Esteban Ocon doing stints in the German tintop series.