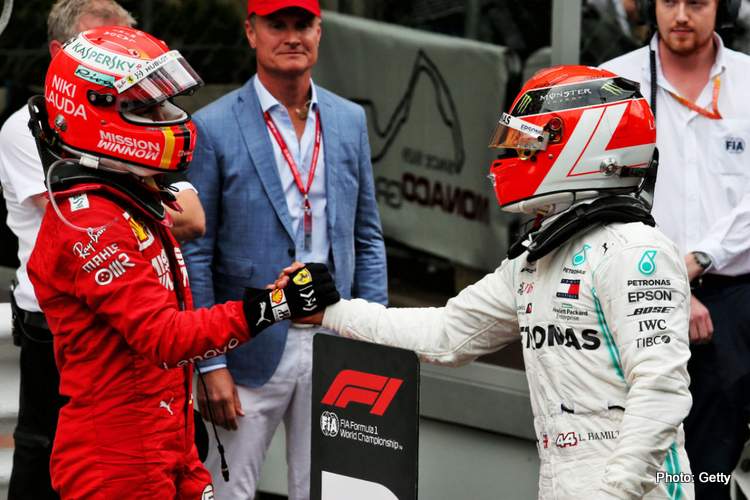 Winning in Monaco is always special, but you could really sense Lewis Hamilton’s happiness when he took victory on Sunday after a tense race. He had to use all his experience to stay ahead of Max Verstappen’s Red Bull, so while this was Mercedes’ sixth consecutive win of the 2019 season there was nothing easy about it.

F1 needs heroes and Niki was one of them

In many respects this race win for Lewis resembled some of the famous victories by one of Formula 1’s most talented, analytical and tactical drivers – Niki Lauda. His loss to the sport is significant, not only as Chairman of the Mercedes F1 team, but the wisdom, experience and personality he brought to Formula 1.

It is not surprising that Niki was on everyone’s mind at the weekend, with lots of tributes being paid ahead of his funeral in Vienna this Wednesday. Every sports needs its heroes and superstars, and Niki Lauda was definitely one of them.

His last victory in Formula 1 came at the 1985 Dutch Grand Prix when he had to keep McLaren team mate Alain Prost behind him, positioning the car to defend at each corner, and then making sure he was fast enough on the quick sections.

This is exactly what Lewis had to do on Sunday in order to keep Max behind, because when the Safety Car cam out on Lap 11 and everyone stopped for tyres, Mercedes put both their cars onto the medium compound tyres. These tyres were typically only good enough to last 50 laps, but Mercedes hoped to make them last longer. They also chose this tyre in case light rain showers arrived.

In the end Lewis had to make those tyres last for 65 laps, and he was having to drive 2-3 seconds per lap slower the before. When you are faced with tyres wearing out you have to brake, steer and accelerate very conservatively, and it is not surprising that Lewis was really worried that he would be overtaken or suffer a failure.

In true Niki Lauda-style he did exactly what was needed, positioning his car in the middle of the track to defend from Verstappen, and then making sure he got the acceleration onto the two fastest parts of the track – the pit straight and the tunnel under the Fairmont Hotel. This was a mature drive, and a victory Hamilton really had to fight for.

I cannot blame Max for going for it

Monaco was another Mercedes’ track, and this will worry their competition because usually we would expect Ferrari and Red Bull to be quicker on a slower, twisty circuit like this. Lewis and Valtteri Bottas really battled for pole position, and it looks like the only Valtteri did not get pole position was that he was blocked by slower cars on his warming up lap in the final part of qualifying.

We saw another indication of Valtteri’s strength this year at the start of the race, when Max really challenged him into Turn 1 but the Mercedes defended well and held second behind Lewis. It is a real pity that Max then drove into Valtteri’s car during the pit stops, because otherwise I believe Valtteri could have held on to 2nd and helped to protect Lewis.

As things turned out the collision cost Valtteri a lot of time, as he had to return to the pits for a second pit stop, dropping him further back, behind Sebastian Vettel.

I cannot blame Max for going for it, but when a team makes an unsafe release in the pits it is up to the driver to make sure that you don’t hit anything. In some ways he was quite lucky to only have a 5-second penalty. It was fantastic to watch how hard Max was pushing Lewis during the final 20 laps of the race, with Sebastian just behind in third place and clearly waiting to see what would happen!

Max was really pushing flat out, and it was good that he tried to overtake Lewis, even if the timing of his overtaking attempt at the chicane was a little late. It kept the spectators entertained, but ultimately Lewis was always going to stay in front.

Ferrari has work to do after Monaco – both the drivers made mistakes this weekend, with Sebastian crashing in practice and Charles Leclerc missing the car weighing instruction during qualifying, which contributed to him losing valuable time. The confusion in qualifying which saw Charles sit in the pits and watch his teammate knock him out of Q1 must have been painful.

I still believe Ferrari’s day will come, and that we will eventually see Sebastian and Charles win races this season, but the team really needs to pull together.

With Max pushed back to fourth place as a result of his 5-second time penalty, it was nice to see Valtteri joined Sebastian and Lewis on the podium, both of them wearing Niki Lauda-tribute helmets. I think Niki would have enjoyed that race, and I know we will all miss having him around.