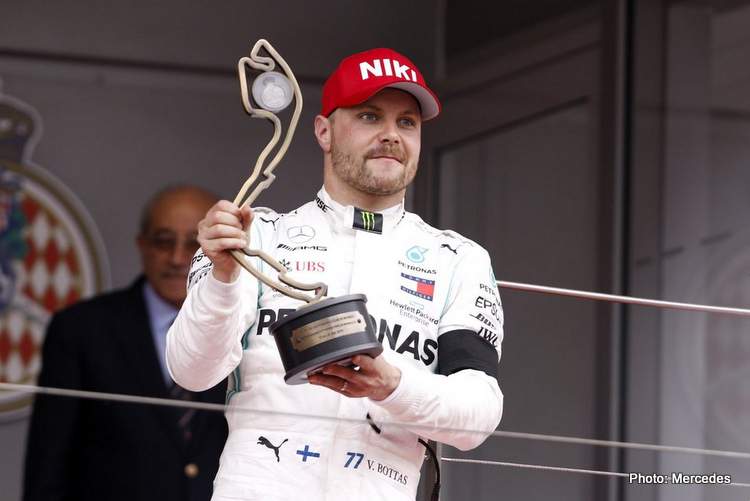 Mercedes expect an angry Valtteri Bottas to come back fired up after losing ground to teammate Lewis Hamilton in the Formula 1 world championship through no fault of his own at Sunday’s Monaco Grand Prix.

The Finn is now 17 points behind the five-times F1 world champion after finishing third in Monaco following a pitlane collision with Red Bull’s Max Verstappen early in the race.

Verstappen was handed a five-second penalty for the unsafe release, a sanction that dropped the Dutchman from second to fourth.

Hamilton won, his fourth victory of the season, with Ferrari’s Sebastian Vettel promoted to second after Verstappen’s drop.

“From Valtteri’s point of view, he will be gutted. He had the pace on the weekend, he could have been on pole in terms of raw speed and today P2 (second) was the minimum I think. And that P2 was taken away from him.

“The Valtteri of 2019 is going to get out of it stronger,” added the Austrian.

Bottas has still finished on the podium in every race so far this season, with Mercedes taking five successive one-twos until Monaco, and has been a different driver to the man who failed to win anything in 2018.

He has two wins and three second places as well as Sunday’s third, which was still his first Monaco Grand Prix podium appearance.

“I think he has shown huge resilience and determination in these last races,” commented Wolff. “The speed [in qualifying] was mind-boggling yesterday and I have no doubt about it that it’s going to annoy the hell out of him and he’s going to come back very, very strong in Montreal.”

Bottas said his race had been ‘a bit of a Sunday drive’ after the impact with Verstappen left him with a puncture.

Big Question: Can Valtteri raise his game to beat Lewis in forthcoming rounds?