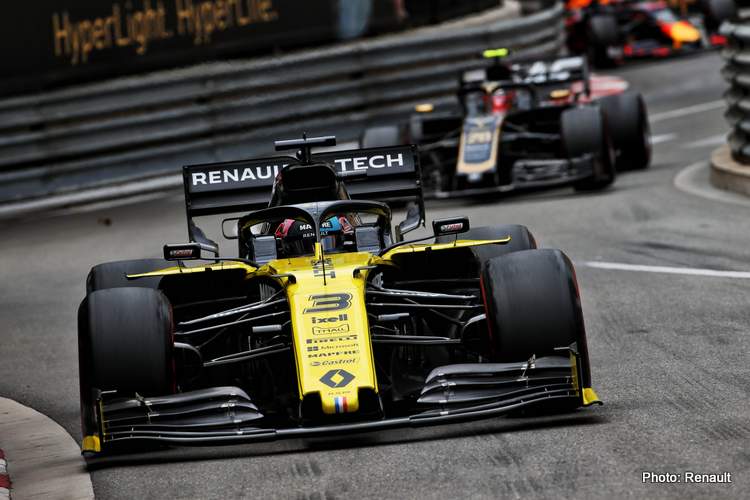 Daniel Ricciardo had started from sixth on the grid, however an early pit stop strategy did not play out and the Australian finished in tenth, which was converted to ninth following the application of post-race penalties.

Daniel made an excellent start and had gained a place to fifth. He pitted under an early safety car but came out in traffic. Backed up behind a slow-moving McLaren he lost valuable time, but once in clean air he closed on the ninth-placed Haas by around a second a lap. The strong pace was just enough to be moved into ninth once Romain Grosjean’s penalty had been added to his overall race time.

Nico passed the flag in P14 after an early incident involving Charles Leclerc. The Ferrari driver was racing from the back of grid but an ambitious move on Nico round the Rascasse clipped the back of the Renault and caused a right rear puncture. He pitted but got stuck behind a roadblock provoked by a spinning Williams and Alfa Romeo and then slower cars and was unable to make significant progress.

“Nothing went our way today. We made a decent start, kept it clean off the line and then we suffered a puncture after Charles [Leclerc] sliced my tyre open. Luckily, I didn’t hit the wall, but the Safety Car meant everyone gained on me and from then, I was at the back of the train and it was difficult to recover from there.”

“It’s hard to take as the results today don’t reflect the competitiveness level of Renault at the moment. With a clear track at the end, we showed very good pace. The car had more performance and potential than what the result showed. But, that’s racing sometimes and we need to make the most of the opportunities in Canada.”

“It was a very frustrating race, to be honest. We had a great start, jumped Kevin [Magnussen] on the outside for fifth and had a strong Turn 1. Then we pitted under the safety car, which is where we missed out.”

“We definitely could have done better and got a great result as we had all the cards in our hand. Although we missed some points, the car was very good even though we couldn’t always use the speed we had. We’ll look at what happened and address it for future races.”

Cyril Abiteboul, Team Principal: “After the good qualifying yesterday, we thought a big part of the job had been done. Unfortunately, the single most important decision of the day was to stop Daniel under the safety car.”

It turned out to be the wrong one, on the basis that it gave McLaren the opportunity to execute a smart team strategy with Norris and Sainz. A small positive is that we return into the points, but the bigger positive is that the car has demonstrated its potential, not just on the short runs yesterday, but on the longer runs today.”

“It’s clearly a missed opportunity that does not reward the hard work of the team and the drivers to improve the competitiveness of the package.”