Haas: Almost everything that could go wrong, went wrong 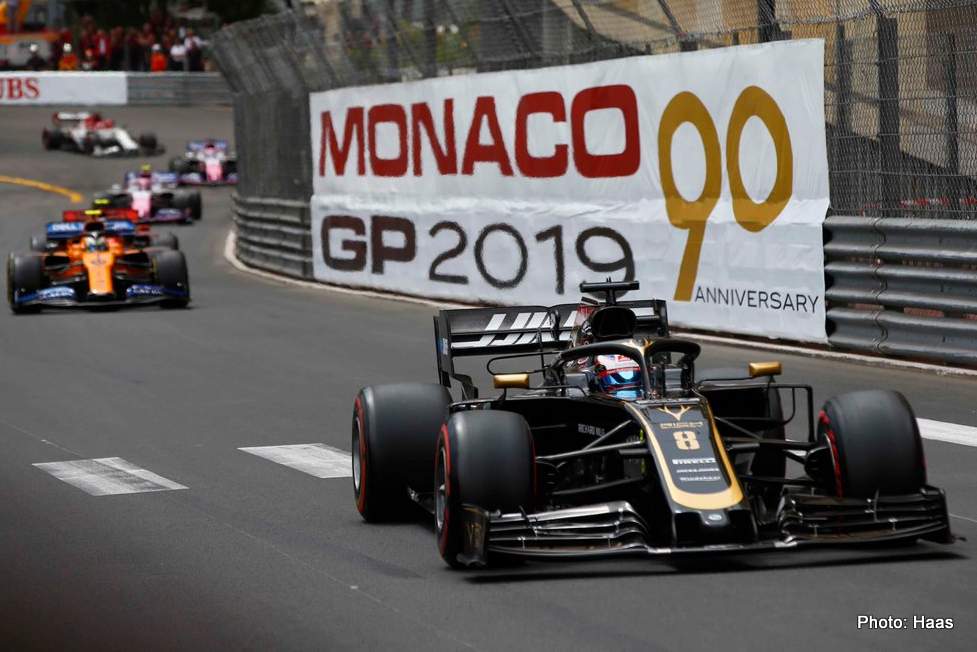 Grosjean and Magnussen started the 78-lap event around the 3.337-kilometer (2.074-mile), 19-turn street circuit on Pirelli P Zero Red soft tires – as did most of the rest of the field. At the drop of the green flag, Magnussen dropped a position from fifth to sixth as defending event-winner Daniel Ricciardo of Renault slipped past him in the first corner.

Grosjean, meanwhile, picked up a position to 12th when he got by McLaren driver Lando Norris on the opening lap. Grosjean held off Scuderia Ferrari driver Charles Leclerc over the next seven laps before the determined local favorite finally got by Grosjean on lap eight, dropping the Haas F1 Team driver back to his original starting position of 13th.

Slight mayhem ensued less than two laps later when Leclerc tangled with the Renault of Nico Hulkenberg, bringing out the safety car. Half the field opted to make their first pit stops, including Magnussen from the sixth position for a set of Yellow Medium tires. Grosjean stayed on track and resumed in ninth place when the race went back to green on lap 15 while Magnussen resumed in 14th with eight cars ahead of him that did not pit.

Grosjean did a masterful job of managing his soft tires, enabling him to reach fifth place by lap 40. He finally pitted – the last in the field to do so – on lap 50 when he stopped for a set of medium tires and rejoined the race in ninth with 28 laps to go.

Grosjean held position the rest of the way, but a five-second penalty for crossing the line at the exit of pit lane cost him a position, moving Ricciardo up to ninth and dropping Grosjean to 10th.

Magnussen, who crossed the finish line 12th, was assessed his five-second penalty for leaving the track and gaining an advantage during a midrace battle with Racing Point driver Sergio Perez through the left-right-left combination of turns 10 through 11.

The Rich Energy Haas F1 Team maintained its sixth-place position but tied with Toro Rosso in the constructors’ standings with today’s results, one-point behind fifth-place Racing Point and two points ahead of eighth-place Renault.

Mercedes driver Lewis Hamilton, the polesitter for the second time this season, scored his second win in a row, his fourth of the season, the 76th of his career and his third at Monaco. He crossed the finish line 2.375 seconds ahead of Red Bull’s Max Verstappen, but a five-second penalty assessed to Verstappen for an unsafe release from his pit stop dropped him to fourth.

Romain Grosjean: “It’s a better result than we were expecting – that’s for sure. It’s been a good race. We tried a different strategy. I think the Toro Rosso of Albon stayed out a bit too long in front of us, and by the time we cleared, our tires were well worn. We did our best, we tried.”

“It’s a shame I couldn’t end up in front of Sainz, because I think I’d have had much more pace at that time of the race. Then I got the penalty at the end. I’ll look at the footage. It’s close, I still think there’s a piece of my wheel touching the line, but I got the penalty. All-in-all though, it was yesterday that cost us good points today.”

Kevin Magnussen: “I don’t really know what happened, it wasn’t the race we were hoping for today. We’ve done a very good job together this weekend. It was a perfect weekend until the race. It’s a big shame but we’ll see what went wrong today and why it happened.”

Guenther Steiner, Team Principal, “It was a challenging race for us, almost everything that could go wrong, did go wrong for us. It’s Monaco though, I think there were just circumstances that led us to only score one point here. I don’t even want to go into all that happened, otherwise you’d have to write a book about it.”

“Obviously, we’re not happy about it, but a lot of people would have been happy getting away with one point. We’re pretty upset about that. What we’re not upset about is the performance of our car, the team and our drivers.”

“Today we got into circumstances we didn’t want to be in, but we know the car is faster than it showed. That’s a good thing to look forward to, and I’m sure we’ll make up for it. Hopefully one day we won’t be unlucky, I’m not even demanding to be lucky – just not unlucky.”