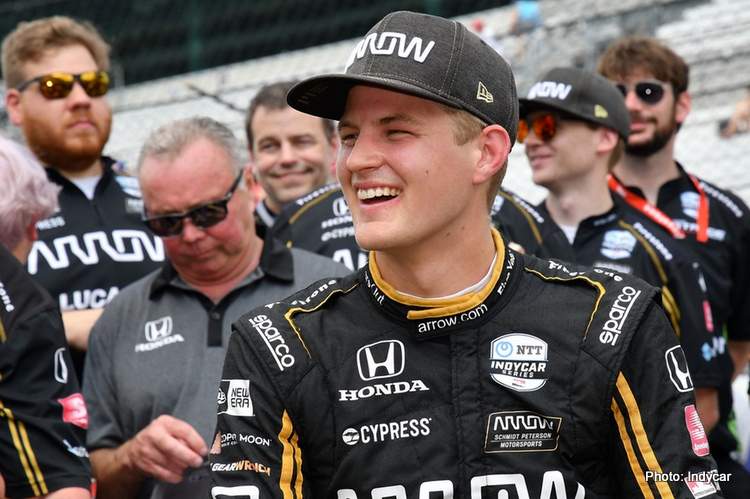 The level of nervousness varies in six rookies starting Sunday in the 103rd Indianapolis 500 presented by Gainbridge on Sunday.

Former Sauber F1 driver Marcus Ericsson, the field’s second-fastest rookie, will start his first Indianapolis 500 from 13th in the #7 Arrow Schmidt Peterson Motorsports Honda. Racing on the famed 2.5-mile oval at 235 mph is quite an adjustment from previously driving on road courses in Formula 1. The 28-year-old Swedish driver has enjoyed the experience so far.

“So far, it’s been over my expectations,” Ericsson said. “I feel like every time I’ve been out here, I’ve been learning something and taking it step by step. We’ve been competitive all month here, and I’ve been comfortable.”

“As a driver, you don’t know how you’re going to feel out on an oval because it’s such a different thing to anything I’ve ever done before. But I’ve had a lot of fun. I’ve gotten my head into this oval thing, and I really like it.

“I’m excited for the start. Of course, you’re nervous, you need to be a bit nervous, but for me I’ve been excited all month. It’s a great event. This whole place, it’s just so cool. You see so many people, so many fans, how much it means to everyone. To be part of that, for me, is very special.”

Fellow Swedish rookie Felix Rosenqvist was having a similar enjoyable experience in practice until he crashed in Turn 2 on May 15. That slowed him a bit. But the Chip Ganassi Racing driver has settled down after talking with five-time series champion Scott Dixon and three-time Indy 500 winner Dario Franchitti, who advised that coming back from a crash and learning from that setback is part of the process.

“Before the crash, I felt really good, like probably too good in the car,” Rosenqvist said. “I think everything just happened too fast. I probably took too many steps too fast. After that, it’s been going really slowly to get back. You feel kind of hopeless I that situation, like you don’t have the confidence to go quicker.

“But then you speak to Dario and Scott and they say like: ‘We’ve all been there. It’s nothing strange.’ When you’ve done that whole thing, you probably get over it quicker if it happens next time. I wouldn’t say I’m an oval master, but I’m definitely back in shape since the crash, and I think we can have a good race.”

Rosenqvist, 27, will start 29th, in the middle of row 10, in the No. 10 NTT DATA Chip Ganassi Racing Honda. Like Herta, he also has experience on the IMS oval in Indy Lights.

“There’s only one line in an Indy car,” he said. “In Indy Lights, you can go like a slalom through the corners. It’s a lot to learn, and there aren’t shortcuts. You just have to get through it.

“The start is probably the part that makes me nervous. It’s three-wide going into Turn 1, and I’m in the back, as well, which is probably very interesting.”

This time last year, Santino Ferrucci was in Monaco qualifying for a Formula 2 race. He had always dreamed of driving in “The Greatest Spectacle in Racing,” but he didn’t think his first time at Indianapolis Motor Speedway would come so soon.

The 20-year-old Connecticut native will start 23rd in the middle of row eight in the No. 19 Cly-Del Manufacturing Honda fielded by Dale Coyne Racing. He described his first Indy 500 practices as “terrifying.” How does Ferrucci now consider his level of nervousness?

“So-so,” he said Thursday with a smile. “I’m more nervous about running around other cars for three hours. You know you have to move up. That’s the tricky bit. That’s what makes me nervous. I just want to finish the race.

“It’s a lot. I’m not used to pack racing and running around with everybody around you. It’s a new experience. It would be a new experience to any 20-year-old, but for me it’s like, ‘Aw, this is fun.’ You want more of it.”

The fastest newcomer is Colton Herta, who doesn’t expect nerves will be an issue when he starts in the middle of the second row in the #88 Harding Steinbrenner Racing Honda.

“I think I get more nervous from my gigs with my band than I do actually driving the car,” Herta said.

Why is being a drummer with The Zibs, his self-described garage alternative punk band, more stressful than driving a race car with 32 others at Indianapolis Motor Speedway?

Herta’s triumph on the Circuit of The Americas road course in the season’s second race earned Herta the distinction as the youngest winner in NTT IndyCar Series history at 18 years, 11 months. The second-generation racer has proven in a short time that he’s not the normal rookie.

The Californian grew up around racing with his father, Bryan, a former Indy car driver who owns a race team that along with Andretti Autosport and Curb-Agajanian is backing Marco Andretti.

When Bryan was the owner for Dan Wheldon’s 2011 Indy 500 win, an 11-year-old Colton experienced Victory Lane at IMS.

“I tasted the milk,” Colton said. “Everybody is cheering and going crazy. I don’t think I fully understood how big it was to win it, but I thought it was pretty incredible.”

Since then, he’s learned. When Colton swept both IMS races in the Indy Lights presented by Cooper Tires last year, he didn’t kiss the famed “Yard of Bricks.”

“There’s only one race you’re allowed to kiss the bricks in,” Colton said, “and that’s the Indy 500. Everything else doesn’t count.”

The field’s other two rookies, British drivers Jordan King and Ben Hanley, will start next to each other in row nine. King qualified 26th in the No. 42 Rahal Letterman Lanigan Racing Honda. Hanley secured the 27th position in the No. 81 10 Star DragonSpeed Chevrolet.

“The biggest thing was qualifying,” Hanley said. “Those were the biggest nerves because you could have been packing up and going home. Everyone had us in the bottom three, so it was nice to prove everyone wrong and show we mean what we say that we want to be an independent team and eventually become full time.”

DragonSpeed has planned to compete in five series races this season in a gradual adjustment from the team’s championship-winning sports car background.

“Priority No. 1 is to finish the race,” said Hanley, 34. “There’s no pressure as in I want to be in the top 10, I want to pass five cars on the first lap. We just want to finish the race. As we’ve said all season, we have no experience, so we just need to finish the race and gain all the data and knowledge and learn as much as we can and then that will give us a good platform to step up next year.”

That said, he admits the Speedway’s front straight doesn’t have as much room as it appears on TV.

“When you see the start with three abreast, it looks wide,” Hanley said. “But when you’re down here, it’s not.”

“I’m quite relaxed, quite chilled, happy to be here and excited to be here,” King said. “You wake yourself up when you’re going 230 mph an inch away from the wall.”

Although he experienced series road and street courses last season while driving for Ed Carpenter Racing, his May has been a series of adjustments to a new car, new team, new engine manufacturer and especially a high-speed oval. 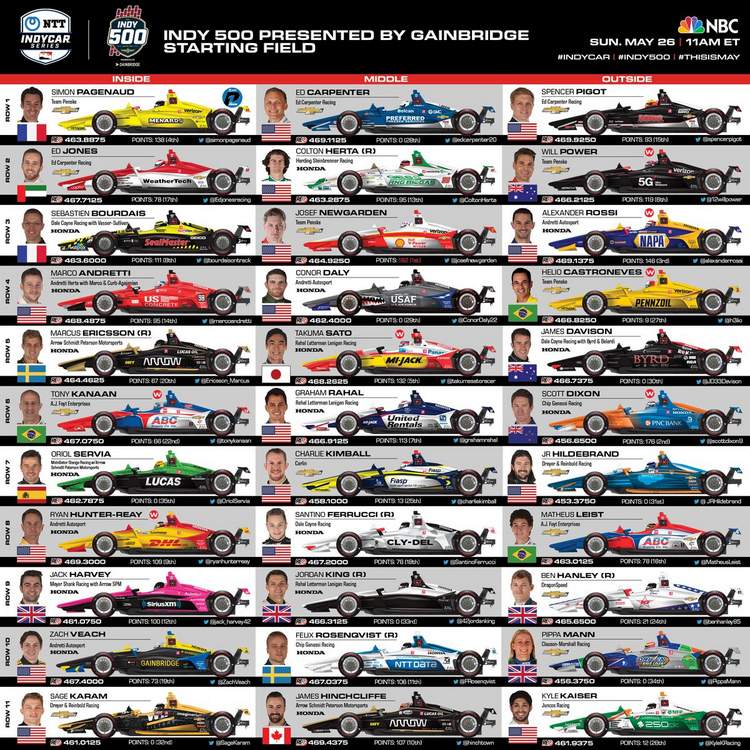