Brown: Relationship with Fernando has never been stronger 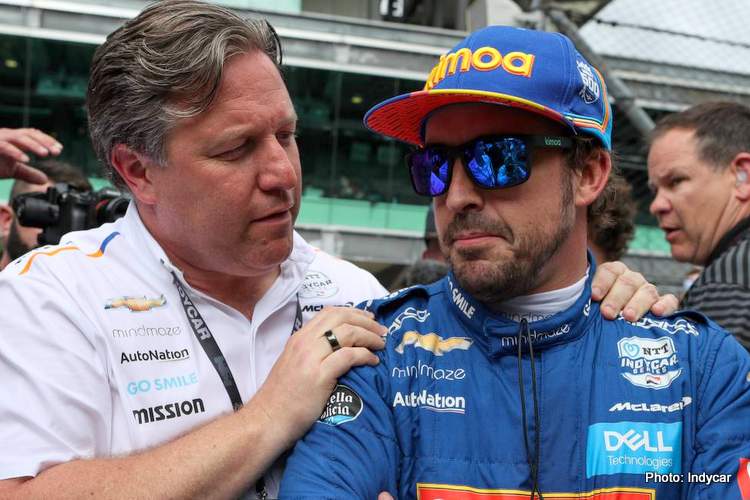 In the wake of an embarrassing attempt at qualifying for the Indy 500 last week, McLaren chief Zak Brown insists that the bond between their driver and the team are stronger than ever, amid suggestions that they would be better off without each other.

McLaren have bent over backwards to accommodate Alonso since Brown and his crew took over at Woking. The McLaren Indy project was built specifically to take the Spaniard to the Triple Crown of Motorsport which he would have achieved had he won this Sunday.

But we know he won’t and the allure of the ‘Triple’ remains incredibly elusive as Brown and his men naively found out last week in one of the most astounding displays ever of incompetence by a team with a driver of such stature in their car.

Brown has since taken the blame and gone to great lengths to exonerate Alonso, hailing and describing him as calm and focussed despite the mayhem around him, but insiders close to the story report that the double F1 World Champion was at first dumbstruck by what he saw and exasperated by McLaren’s state of unreadiness.

Despite this, a split does not appear to be on the cards according to Brown who told reporters at Monaco, “Our relationship with Fernando has never been stronger. He was obviously very disappointed, we let him down, he deserved to be in the race. He was an absolute star as he always has been when he’s raced with us, and my personal relationship in working with him.”

Meanwhile, 37-year-old Alonso’s options are unclear at the moment. By all accounts this season with Toyota will be his last with the manufacturer in the WEC, while an Indycar programme with McLaren might have sounded good on paper but, after the debacle at the Brickyard, it would be surprising if the Spaniard is still enthused, if he ever was.

Brown hinted there would be a period soul searching before a plan for their collective future emerges, “What he does post-Le Mans is up to Fernando. We have a contract with him for some McLaren activities.”

“If that aligns with some of McLaren’s activities then that would be great but just like he’s been driving with Toyota, I think he’s a bit undecided on what he wants to do yet so we will pick up those conversations when I see him in Le Mans,” added the McLaren team boss.