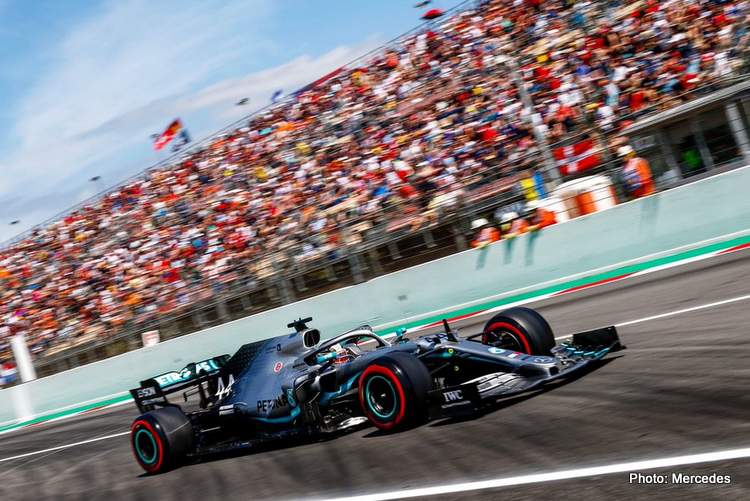 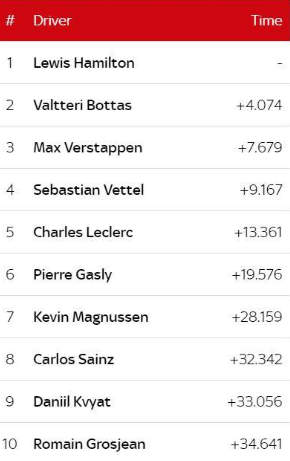 The five-time World Champion was simply untouchable in a largely uneventful race on a sunny afternoon in which Mercedes demolished their rivals again, with Valtteri Bottas, after duffing his start, chased his teammate home for a record-extending fifth one-two finish in Barcelona. It was Hamilton’s 76th F1 victory, while the Silver Arrows have so far dominated all five rounds held this season.

Not even a safety car period with 20 laps to go could derail Hamilton, who in fact benefitted from the incident that eliminated Lance Stroll (Williams ) and Lando Norris (McLaren). Prior to that the World the rear right tyre on the #44 Mercedes was delaminating and looked unlikely to last the distance. The safety car played into his hands, as he pitted for fresh rubber without losing the lead.

The Briton said afterwards, “I have to put it down to this incredible team. This is history in the making to have five one-twos – I’m proud of that and proud of everyone’s hard work.”

“It’s been a hard first four races, it’s a great car and we always get along and we’ve managed to settle our differences and get out well down to Turn One today. It was an interesting start – it was close, I saw the red car go around the back of both Valtteri and I, so I had no idea if they were further ahead, and I knew Valtteri would break super deep so I had to look out for that.”

“At the restart, we had just done a pit stop so I was trying to keep the tyres warm and to do a fast lap on the fresh tyres – I haven’t had a fast lap all year!” added Hamilton who added a point to the 25 he got for the win by setting the fastest and take a seven points lead over Bottas in second.

Bottas was impressive in qualifying, but on race day he simply has no answer as he was out-dragged into Turn 1, with the inside covered by his teammate he had no option to go wide and tuck behind the wing of the sister car. He remained there for the rest of the afternoon to notch up the team’s 49th one-two finish.

The Finn said afterwards, “It was pretty tight but I lost it at the start, there was strange behaviour on the clutch, it was releasing, biting, releasing, biting and I’ve not felt that before. As a team it’s incredible, the fifth one-two in a run is really good. I got some points and that’s important, every point will count, but I have to find out what happened at the start.”

Fittingly Mercedes chief Dieter Zetsche – the instigator of and huge supporter of the Mercedes F1 programme – was sent up top the podium to collect the constructors’ trophy. He will step down in ten days time.

At the start, into Turn 1, Sebastian Vettel opted for the outside line but ended up in no man’s land, flat-spotted his tyres and on the exit found himself behind Max Verstappen’s Toro Rosso. The Dutchman hung on to score a well-deserved podium and take the Driver of the Day award for his efforts on a positive day for Honda power.

Verstappen summed up, “It was a hectic first corner so I backed out of it and it gave me a good position for the first three corners, but the Mercedes is too quick. I’m happy to on the podium.

While Mercedes ‘monstered” the weekend yet again, yet again Ferrari fumbled around in their wake. Clearly, the fake “superior pace” they showed after testing in Barcelona ten weeks ago was a mirage, because on race day (when it mattered) neither Sebastian Vettel nor Charles Leclerc had the firepower to trouble the pacesetters, they also tripped up amongst themselves as the hierarchy of their drivers continues to be an issue.

By lap 18 (long before the safety car) Vettel was over 20 seconds down on Hamilton in the lead, at that rate he would have crossed the line a minute behind the winner! Ferrari are in big trouble.

As mentioned Vettel changed the shape of his tyres when braking and venturing into the aforementioned no man’s land, before bundling back onto the racing line and into the path of Leclerc who backed off to avoid contact. Thereafter he filled his teammate’s mirrors until he got the call to go past. Vettel obliged, but what might have been a two-second gap to Verstappen stretched to nearly six by the time the #16 Ferrari was liberated.

Then, they decided to put Leclerc on to hard tyres, apparently a tactic none of the frontrunners thought of, but any good that might have been with the ploy was scuppered by the safety car. A confusing afternoon for the Reds which cost them third place as Vettel had to settle for fourth and Leclerc following him home in fifth.

Red Bull’s Pierre Gasly was sixth as the top three teams hogged the top six places on the results sheet for the first time this season. The Frenchman currently remains unable to match his teammate in any situation.

The normally explosive battle for the Best of the Rest also provided scant entertainment on a dull afternoon in which each driver appeared to be doing his own thing on track, as very little real racing actually happened during that first long and tedious stanza.

However, after the safety car things did get interesting. Having trailed his teammate Romain Grosjean throughout the race Kevin Magnussen saw a chance after the restart to get by his teammate, the pair touched but the Dane got off the better to finish seventh while the Frenchman, who had a ragged final spell, found himself down in tenth.

Taking advantage of the Haas shenanigans was Carlos Sainz who drove a gritty race on home soil to finish best of the Renault brigade.

Daniel Kvyat made it three Honda-powered cars in the top ten with ninth place, the Russian delivering another mature performance in a race of many potential incidents. His teammate Alex Albon was 11th. The pair might have been further up the order had they been ready when their cars arrived nose to tail for a tyre change during the safety car period.

Out of contention all weekend with their updated package, Renault are in a crisis no matter the denials from within the French team. Before the safety car came out (allowing lapped drivers to unlap themselves) both Nico Hulkenberg and Daniel Ricciardo had been lapped, as they have been in all the races they have finished this year.

Barcelona sorely exposed how much Renault have gone backwards, not only relative to McLaren with the same PUs but also relative to the podium which was their aim for this year. Their drivers laboured home, out of contention, with Ricciardo finishing 12th and Hulkenberg behind him.

Also out of the picture all weekend were Alfa Romeo who disappointed after an early season that showed some promise. Veteran Kimi Raikkonen finished 14th and rookie Antonio Giovinazzi 16th.

Splitting the pair on the results sheets was Sergio Perez in the Racing Point. The Silverstone based outfit endured a weekend to forget as it is clear the new money pumped in by Lawrence Stroll has yet to pay dividends. Ironically, if not cruelly, they were performing way better when staff were not being paid.

Compounding the misery for the Pinks was Stroll junior’s DNF in the kitty litter.

As for Williams… no prizes for guessing where they were. Out of touch and increasingly insignificant.

When the lights went out at the start, it was Hamilton who made the best start and on the long run down to Turn 1 he tucked in on the inside of pole sitter Bottas, who later complained of clutch problems on his getaway.

Vettel had also made a good start and he tried to pass both Mercedes around the outside into the first turn. It was a risky, late-braking move and attempting to keep control Vettel locked up briefly.

As Vettel got a poor exit from the corner, Verstappen pounced, passing the Ferrari in Turn 3 to take third place behind new leader Hamilton and Bottas.

Behind the front four Gasly in the second Red Bull was battling hard with the second Ferrari of Leclerc and also coming under pressure from Grosjean. Gasly managed to defend well, though, and he kept P6 as the field crossed the line to start lap two.

Vettel, hampered by a flat spot sustained in his first-lap lock up and Leclerc quickly closed the gap to his team-mate. Vettel sensibly moved aside at the start of lap 12 and let his team-mate through.

Vettel quickly began to close up on Leclerc, who had pitted for hard tyres. The German was clearly quicker on his medium tyres than his young team-mate racing on hard tyres and soon after the halfway point Leclerc returned Vettel’s earlier favour by backing off into Turn 4 to let the German through to fourth place.

Vettel then attempted to close the gap to Verstappen and though the Ferrari driver cut the deficit by a few seconds, on lap 40 he again made his way to the pit lane. He took on a set of mediums at the end of the lap and was soon back up to fifth.

Verstappen was next to make his second stop and at the end of lap 43 he took on medium tyres. He emerged behind Leclerc and quickly began to close up behind the Ferrari driver as ahead Bottas pitted for soft tyres.

On lap 45, though, the Safety Car was brought into play when McLaren’s Lando Norris and Racing Point’s Lance Stroll collided, with both being forced to stop.

Both Hamilton and Leclerc elected to pit while the race was neutralised, with the Ferrari driver taking on medium tyres and the Mercedes driver fitting softs. Behind the Safety Car the order was Hamilton followed by Bottas, Max, the Ferraris of Vettel and Leclerc, while Gasly still held sixth.

When the SC left the track Hamilton set a blistering pace on the restart to set the fastest lap of the race and to keep Bottas at bay. Verstappen also gradually eked out a gap to Vettel.

Fifteen laps later Hamilton crossed the line to take the 76thwin of his career with Bottas then taking the flag to continue Mercedes’s perfect start to the season.

Verstappen too his 24thcareer podium with third-placed ahead of Vettel and Leclerc while Gasly finished as he started, in sixth place. Magnussen was seventh for Haas ahead of home hero Sainz.

Kvyat took two points for Toro Rosso with ninth-place but despite putting enormous pressure on Grosjean in the closing laps, Alex Albon couldn’t make it two Toros in the points and Haas driver managed to cling on to tenth place at the flag.

An all-time #F1 record equalled at the #SpanishGP 🇪🇸

And the champ goes back to the top of the standings 👀 pic.twitter.com/E87ulYa5U8 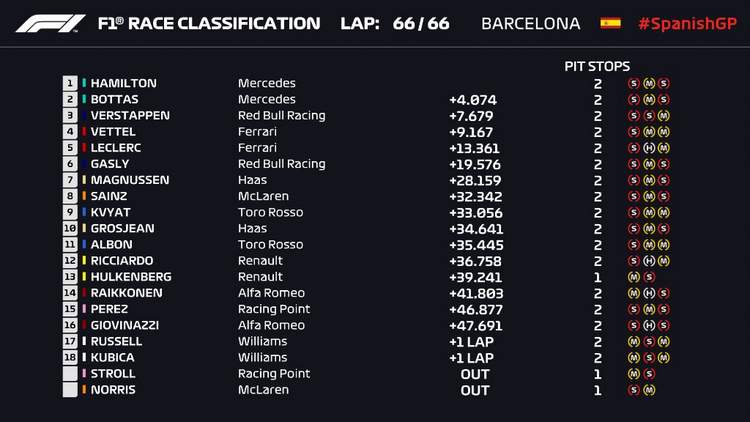 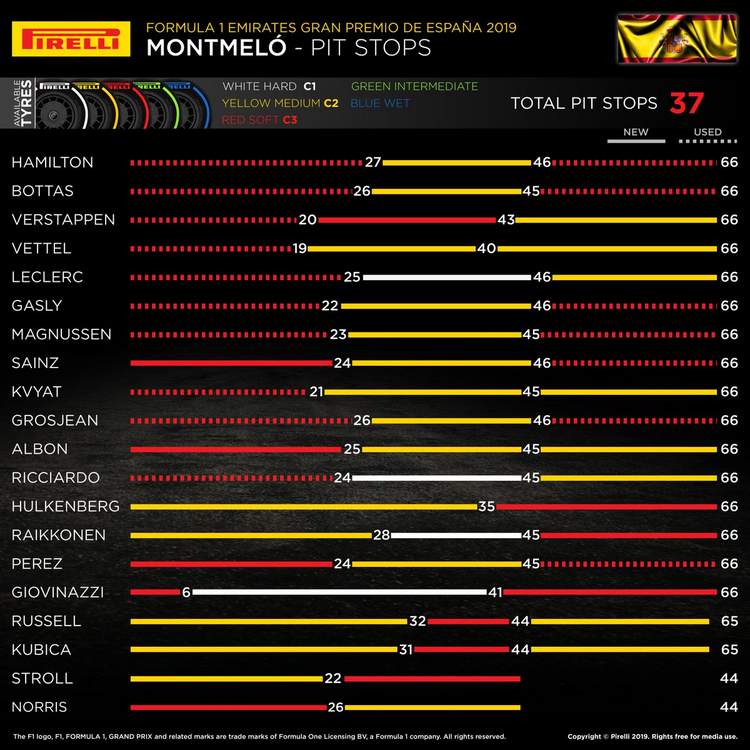 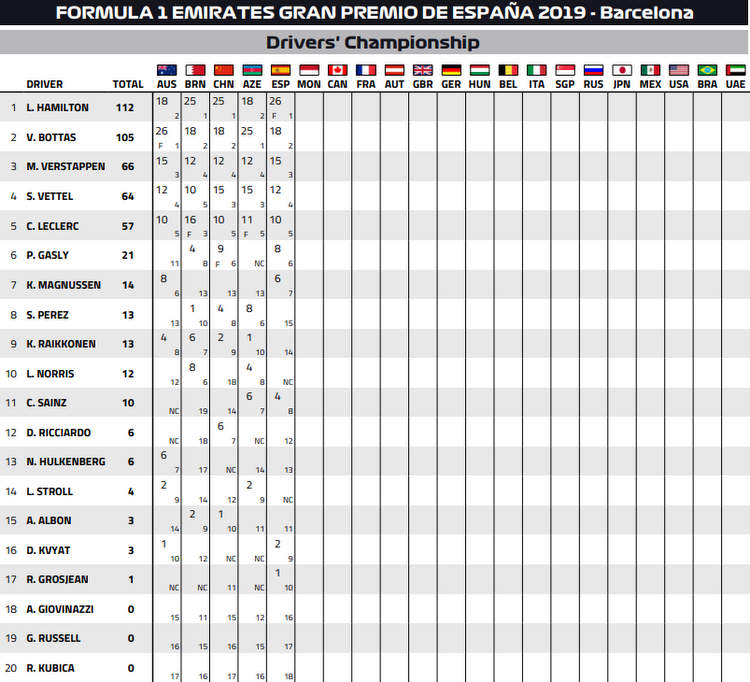 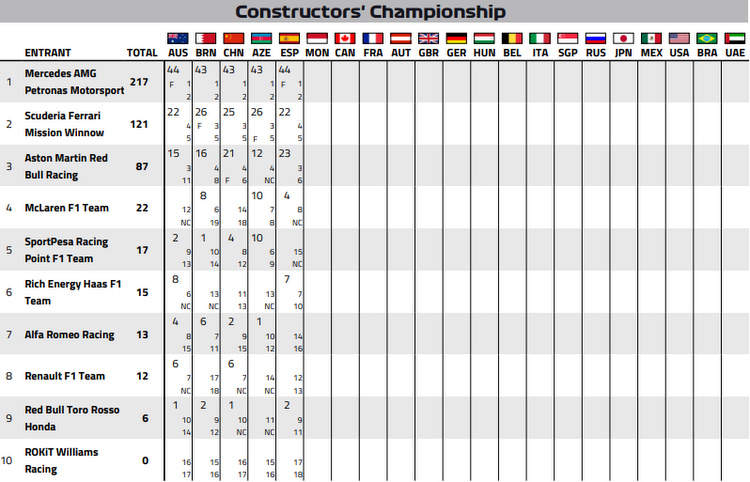