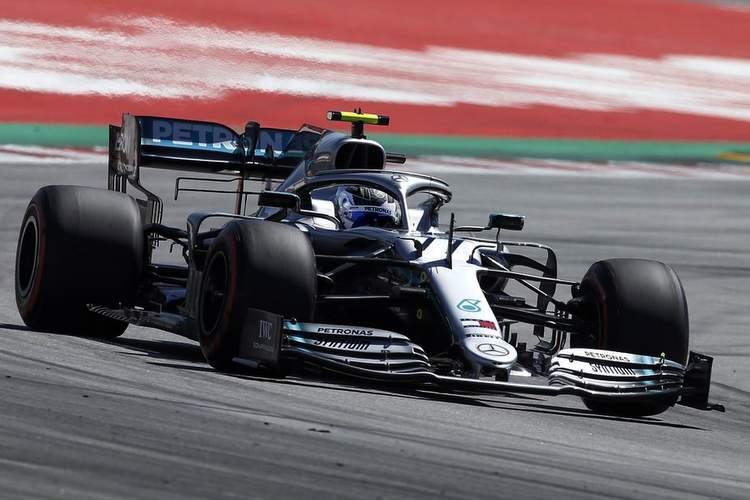 Valtteri Bottas powered to pole position for the Spanish Grand Prix, Round 5 of the 2019 Formula 1 World Championship, at Circuit de Barcelona-Catalunya, on another afternoon of perfection by Mercedes as Lewis Hamilton claimed second place on the grid for a front-row lockout by the World Champions.

The Finn, who has reinvented himself this season, continued his fine run of form and delivered the pole-winning lap of 1:15.406 on his first attempt in Q3 after which neither he or anyone else could go faster.

It was a big statement from Bottas with over half a second advantage over his illustrious teammate in the sister car who was favourite for pole before qualifying began but simply had no answer for his teammate who last year served as his wingman.

Bottas ‘Reloaded’ said afterwards, “I really enjoyed it. I enjoy the adrenaline rush you get from those laps. Practice Three was difficult with the spin but I forgot about that and moved on. The season has started well. I feel better and better in the car so I look forward to tomorrow.”

Hamilton appeared somewhat bemused by the trouncing he got when he conceded, “Valtteri did a fantastic job, he’s been quick all weekend. On my side, I didn’t put the lap together. The last laps, in Q3 particularly, just weren’t strong.”

“Ultimately it just wasn’t a good enough job. It’s great for the team to have this one-two so we’ll try and convert that, but if I can reverse it I’ll be happy.”

The Ferrari renaissance did not materialise with Sebastian Vettel third quickest albeit a massive eight tenths behind the top time. Clearly, the new spec-package unleashed by the Reds this weekend has done little to narrow the gap of 0.806 of a second – the largest deficit to Mercedes they have had in the first five quali sessions of this season.

Vettel lamented in parc ferme, “We got everything out of the car in the first run. I’m happy, but not happy. The car does not feel bad, but we’re not quick enough.”

Teammate Charles Leclerc was out of sorts throughout the afternoon, ending the session fifth, three-tenths of a second down on his teammate

Splitting the Reds on the timing screens was Max Verstappen in the Red Bull featuring the spec-2 Honda package for the first time today, the Dutchman ending fourth fastest, with teammate Pierre Gasly sixth.

A tad over 1.5 seconds down on the top time, in seventh Romain Grosjean, was Best of the Rest driving the Haas followed by Kevin Magnussen a hundredth of a second down on his teammate and signalling something of a revival for the American team who had a torrid time in Baku a couple of weeks earlier.

Daniil Kvyat made it three Honda-powered cars in the top ten with his eighth place for Toro Rosso.

While Honda found good pace, the opposite happened with the Renault powered brigade as only Daniel Ricciardo scraped through to Q3 and at the end of that was tenth. Nico Hulkenberg failed to make it out of Q1. He was 16th.

Lando Norris was 11th in the McLaren, with teammate Carlos Sainz 13th, the pair split by the Toro Rosso of Alex Albon.

Sadly the Williams pair were anchored to the bottom of the timesheets, George Russell’s best effort 3.6 seconds down on the top time was good for 19th, with Robert Kubica 1.2 seconds further back!

In the opening session, Vettel and Leclerc set the early pace before Verstappen moved to the top of the order with a time of 1:17.244.

Bottas then moved to the top of the order with a lap of 1:17.175 to hold top spot ahead of Verstappen until the chequered flag, with Hamilton third ahead of Leclerc and Vettel.

In danger as the final runs began were Giovinazzi in P16 followed by teammate Räikkönen and the Williams duo of Russell and Kubica. Hulkenberg had not set a time after an early off at Turn 4 that damaged his front wing and which kept him out of action until the final runs.

Even when he did manage to get in a lap, Hulkenberg failed to find the pace necessary to make it through to Q2. To compound his disappointment, he was edged out of the session by teammate Ricciardo, with the gap between the Renault drivers standing at just 0.019s. Eliminated behind Hulkenberg were 17th-placed Stroll, Giovinazzi, Russell and Kubica.

In Q2 it was Hamilton who initially stretched away from the chasing pack, with the Mercedes driver posting a lap of 1:16.038. That put him a little over two-tenths of a second ahead of Bottas, with Vettel third.

Verstappen slotted into fourth place with a time of 1:16.726, just 0.059s behind Vettel, while Gasly put in a good opener of 1:17.275 to claim fifth spot ahead of Grosjean and Leclerc.

In advance of the final runs, the drop zone candidates were Albon, Perez, Norris, Kvyat and Räikkönen.

Only Kvyat was able to find enough to escape elimination, with the Russian posting a good lap of 1:17.243 to climb to P8 in front of Magnussen and Ricciardo.

Kvyat’s rise meant a drop-zone spot opened up and it was filled by local heroSainz. The McLaren driver exited in P13 behind Norris and Albon and but ahead of Räikkönen and Perez.

At the top in Q2, Bottas was in imperious form, with the Finn edging past Hamilton’s lap with a time of 1:15.924. The defending champion was second ahead of the Ferraris of Vettel and Leclerc with Verstappen in P5 ahead of Galsy.

And Bottas was able to extract even more from his car in the final session. Hamilton was first across the line but the defending champion’s lap was a scruffy on and he stopped the clock at 1:16.040. Bottas, though, was flying and he crossed the line a massive six-tenths of a second clear of Hamilton, with Vettel third ahead of Verstappen and Gasly.

Leclerc was forced to sit out the first runs as his team worked on the floor of his car. It might have been expected that the Monegasque driver would find his way into the top four, but Leclerc wasn’t able to find the pace and despite two attempts he was unable to beat Verstappen’s time.

The Ferrari driver’s 1:16.588 was good enough to split the Red Bulls, however and Gasly ended the session in P6. He will line up ahead of Grosjean, with Magnussen eighth ahead of Kvyat and Ricciardo. 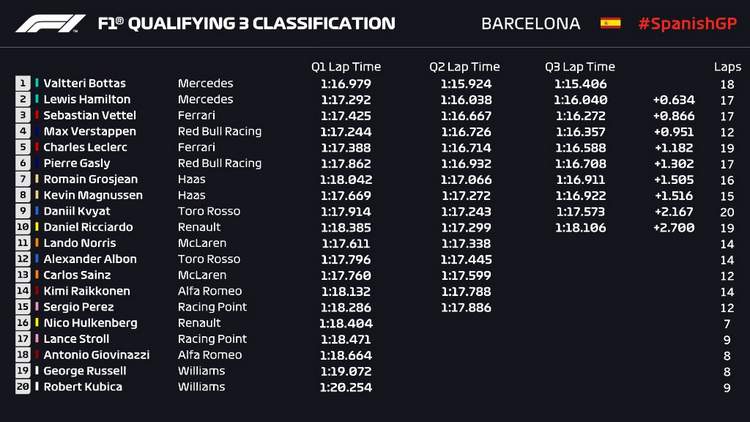 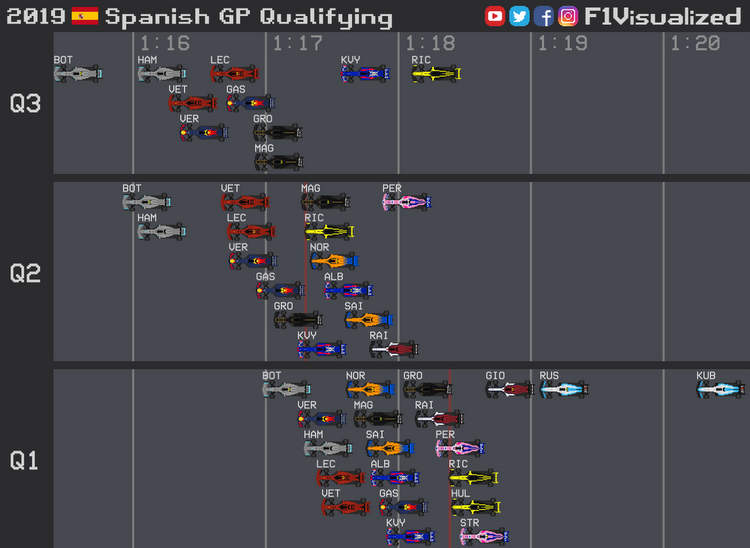