Wolff: Bottas and Hamilton have a very good relationship 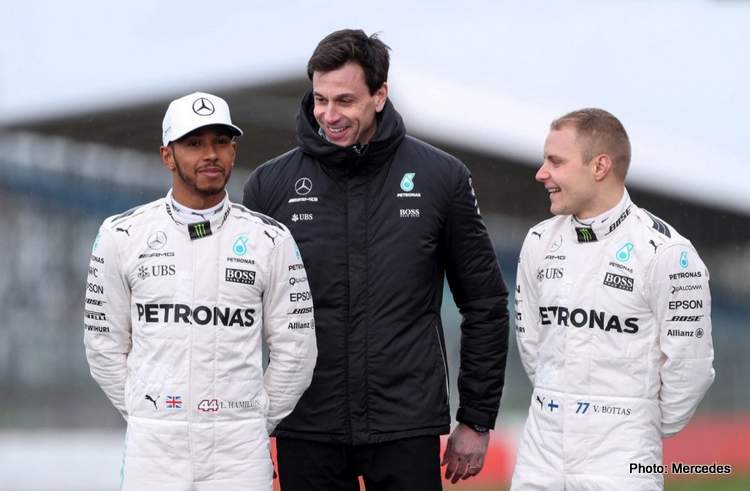 Mercedes may feel a sense of deja vu with Valtteri Bottas and Lewis Hamilton locked in an increasingly exclusive battle for the Formula 1 World Championship title but team boss Toto Wolff says it is different to what went before.

A full-blown, gloves-off, intra-team rivalry — such as Mercedes had to manage with Hamilton and retired champion Nico Rosberg — remains a long way off.

“I think we are lucky that they have a very good relationship, they get on with each other, there is not a lot of games in the background and I’m very happy about that,” said Wolff after Sunday’s Azerbaijan Grand Prix.

“But … we have seen relationships deteriorate. We want them to be feisty, lions in the car. But, equally, the respect needs to stay in there.”

Bottas and Hamilton are separated by just one point at the top of the standings after two wins and two second places each, with the Finn ahead because he set the fastest lap in the season-opening Australian Grand Prix.

Ferrari’s Sebastian Vettel, third in the standings, is already 35 points adrift of Bottas after four races.

Hamilton and Rosberg engaged in a tense rivalry for the title from 2014 to 2016, at the height of Mercedes’ dominance when the Brackley-based team had no challengers.

Boyhood friends who shared hotel rooms and travelled to races together as team-mates in karting, what started out as a friendly rivalry between them swiftly disintegrated into all out acrimony, including on-track contact on more than one occasion.

That prompted Mercedes to impose ‘rules of engagement’ to rein them in but Bottas and Hamilton have enjoyed a far more harmonious relationship.

The 29-year-old Bottas, who replaced Rosberg at the start of the 2017 season, has not posed a serious threat to Hamilton in his two seasons with the team.

The respect between the Briton and the Finn, a very different personality to Rosberg, seems intact with the pair racing each other firmly but fairly in Baku.

Hamilton expects that to remain the case so long as both drivers obey the rules set out by the team.

“I think Valtteri and I have always had a lot of respect for each other, and we continue to do so,” said the 34-year-old. “Drivers in the past didn’t stick to the rules of engagement that we have as a team, and Valtteri does.”

Wolff made clear he is prepared to deal with the situation if it gets out of hand.

“We are very strong as a team and we wouldn’t allow the relationship between drivers to deteriorate to a point that it has a negative effect on the team,” said the Austrian.

“If that would ever be the case again after Nico and Lewis, we will issue yellow and red cards. But we are far away (from that).”

Big Question: When will the “very good relationship” end?