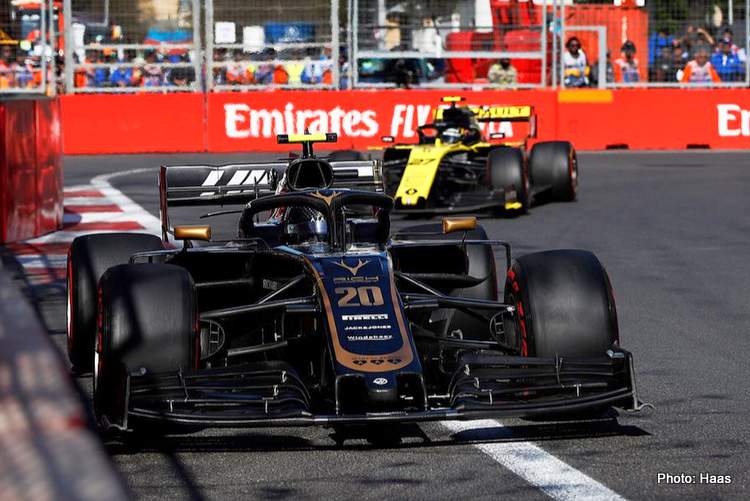 Rich Energy Haas F1 Team driver Kevin Magnussen soldiered to a 13th-place finish Sunday in the Azerbaijan Grand Prix, the fourth round of the 2019 FIA Formula One World Championship.

Teammate Romain Grosjean saw an early end to his day when he retired 13 laps from the end of today’s 51-lap race with brake issues.

Magnussen started from the 12th grid position on a set of Pirelli P Zero Red soft tires as did most of the rest of the field. He dropped a position before pitting on lap eight for a set of Yellow medium tires. He resumed in 18th but steadily made his way back toward his start position, reaching 12th by lap 14.

He held that relative position before dropping a couple of spots on lap 32. He pitted a second time for a new set of Red soft tires during a brief virtual safety car period for an incident on lap 40 and resumed in 13th, where he stayed until the finish.

Grosjean was one of five drivers to start the race on Yellow mediums from his 14th position on the grid, and after dropping two positions during the opening laps, he advanced as high as seventh on lap 13 as most of the field cycled through for their initial pit stops.

He climbed back to 11th before a brake lockup, while negotiating turn 15 on lap 25, sent him briefly down a safety road. He resumed in 17th and held station before finally pitting from 16th for a set of Red soft tires on lap 36. Three laps later, he was called into the pits to investigate his VF-19’s brake issue and subsequently retired.

Romain Grosjean, DNF: “My brake pedal was going to the floor, so for safety reasons we had to retire my car. Before that it was going as well as we could have hoped for. The first few laps on the medium tire were very difficult, then the softs grained, but we came back a little in the fight.”

“I was really pushing the car to its limits. I had a lock up in turn 15, I went straight and had to go a little bit on the escape road, which wasn’t great. I then tried to hang in there, but the pace wasn’t there. We need to sit down now and really analyze everything we can. We need to react to be able to fight for a good constructors’ championship place.”

“I believe we’ve got the car for it, it’s just very annoying to have this underlying issue, which we believe is tire related. Hopefully for Barcelona we can be in a better place.”

Kevin Magnussen, 13th: “It was a tough day today. It’s obviously not the result we were hoping for. We’ll work hard for Barcelona and move on, at least we have some data from there in terms of where the car was working in testing, although temperatures will be a lot different.”

“We didn’t expect this kind of start to the season, but all we can do is keep working to resolve our issues – keep looking for a solution.”

Guenther Steiner, Team Principal: “It’s a very disappointing result. We just need to get better in understanding the tires. We’ve been struggling with the introduction of these new tires since the beginning of the year.”

“We need to get a grip of it. It’s quite disappointing that everything is in if you get the tire to work or not. Everybody else seems to be figuring it out, so we need to work hard on that.”