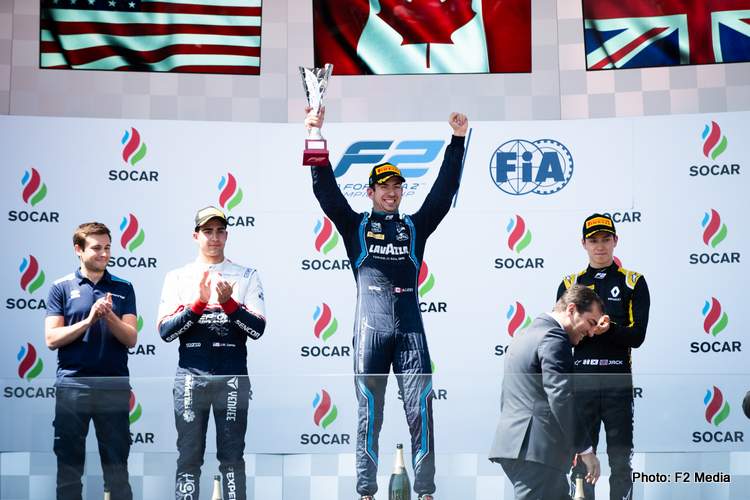 Nicholas Latifi laid further groundwork for a championship challenge, averting an array of incidents behind him to win the FIA Formula 2 Sprint Race in Baku, Azerbaijan.

Conditions remained unchanged at the Baku City Circuit, with the driver’s determined to avoid a repeat of yesterday’s dramatic Feature Race. Sean Gelael achieved just that at the start, when he squeezed through the middle of the field from third to overtake Correa, before slipping around the inside of the polesitter Nikita Mazepin for the lead. Despite initially loosing P2, Correa managed to follow Gelael past Mazepin, who had made a slow start. Latifi smelt blood too and ducked past the struggling Russian.

There was no such luck for those further back, as Tatiana Calderon shovelled Ralph Boschung into the side of Louis Delétraz on Turn 2 and brought out the first Safety Car of the afternoon.

When the safety car returned to the pits, Gelael ensured his positive start wasn’t in vein and retained the lead, but Correa was being put under serious pressure from Latifi. The pressure paid off and Latifi passed for P2: Correa attempted to fight back, but the DAMS driver had made the move stick.

PREMA man Gelael had showed good pace in the Feature Race and used the battle for P2 to extend his lead to 2s to remain out of DRS range – or so he thought… No sooner had Latifi taken P2, he was within 0.7s of the race leader, after setting the fastest lap so far. The orders came from the pitwall for Gelael to push harder, but Latifi proved too much, searing around the inside of the Indonesian.

The margins between the rest of the pack were proving increasingly fine, as Aitken brushed off overtake attempts from De Vries and then Luca Ghiotto. Attack proved the best form of defence for the Feature Race winner as he passed the freefalling Gelael for third behind Correa. The former leader saw his misery further compounded with another double overtake, when the fight between Ghiotto and De Vries carried on past him.

Latifi had become a forgotten man at the front, building up a comfortable 4s lead over his rivals. This gap was shattered with the deployment of a second Safety Car, after Giuliano Alesi rammed into the wall following an optimistic move on Guanyu Zhou.

Memories of a messy restart in the Feature Race yesterday could have reigned heavy on the drivers’ minds, but this didn’t prevent Correa attacking Latifi at the Green Flag. The rookie lunged in-front of the DAMS driver, but Latifi fought back and nearly kissed the tyre of the American on his way to winning back the positon.

Unlike Correa, De Vries was able to make his move stick when he snuck past Aitken for P3. The drama unfolded behind them once more as Ghiotto missed the braking point and ended his race into the wall with no place for Mazepin and Jordan King to get around the stranded UNI-Virtuosi car.

The Safety Car made another appearance and the race went to time. When the track was clear, there were 90 seconds left on the clock. De Vries managed to keep a fingertip on P3 at the restart, but was beaten for pace on the main straight, when Aitken got a tow and sling-shotted around him.

Mick Schumacher – who had started P19 – blasted past his PREMA teammate for 5th on the same straight, before Sette Câmara made an identical move on the Indonesian, narrowly veering away from the barrier as he done so.

Latifi managed to remain out of trouble in the final minute to claim the win, beating Correa, who secured his first ever F2 podium finish. Aitken held onto third for more champagne this weekend. They were followed by De Vries, Schumacher, Sette Câmara, Dorian Boccolacci and Gelael.

The win extended Latifi’s lead in the drivers’ title fight at the end of Round 2, with the Canadian on 62 points, leading Aitken by 19 points, followed by Ghiotto on 39, Nyck De Vries on 38, Sette Câmara on 33, Correa on 18 and King on 16; while in the teams’ championship, DAMS have increased their lead to 95 points over Campos Racing on 55, UNI-Virtuosi Racing on 50, ART Grand Prix on 42 and PREMA Racing on 23. All eyes now turn to Round 3 of the Championship in Barcelona in two weeks’ time. 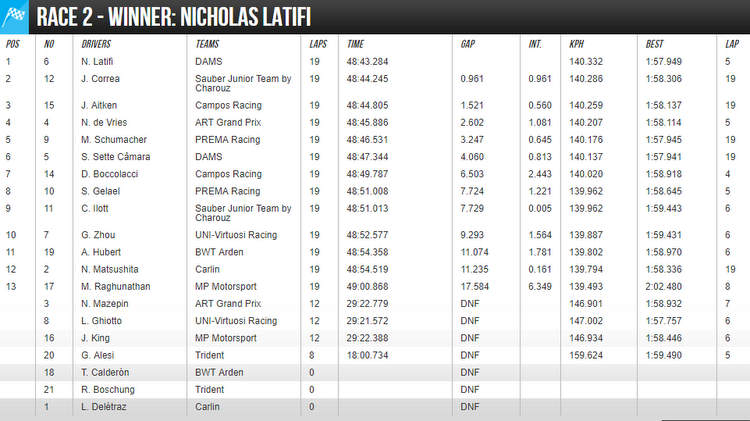