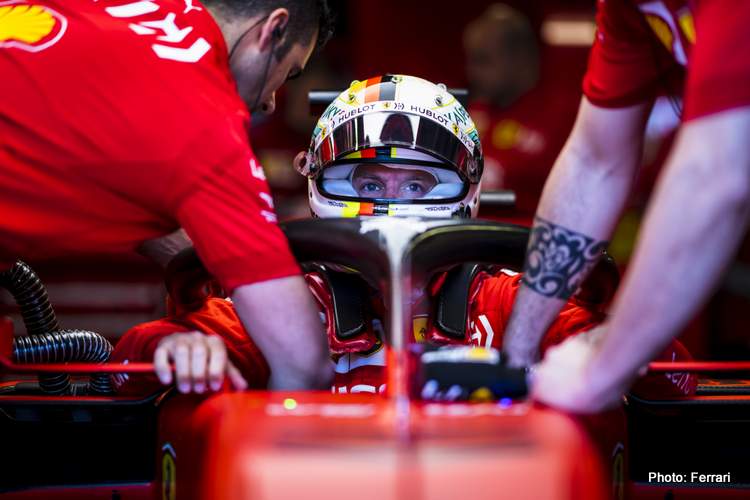 The supremely well-oiled machine that Mercedes has become in this era of Formula 1 is going to be a very tough nut to crack for Ferrari after they were once again soundly beaten by their archrivals at the Azerbaijan Grand Prix where the Reds were expected to flourish.

Indeed it all looked to be that way until Charles Leclerc provided the F1 world with a reality check when he pranged at sunset during qualifying on Saturday with pole position seemingly inhis grasp.

From that point, Ferrari were a beaten team in Baku, or at least any hope of a driver in red celebrating on the top step of the podium evaporated in the shadows of the castle. Instead, in the race they played second fiddle to the silver cars and in the process apparently, messed up Leclerc’s strategy.

Hence, Mercedes comfortably powered into the distance with Valtteri Bottas beating teammate Lewis Hamilton as the pair annexed the top two spots on the podium in what is becoming F1’s version of Ground Hog Day.

Sebastian Vettel was third and, if the truth be told, unlike his young teammate, the German was never in it to win it and while he salvaged third all he could do was watch the Silver Arrows duo score a record-breaking fourth successive one-two.

Sky F1 pundit Paul di Resta, not shy to give his honest opinion, was spot on and summed up the sentiments of many when he declared, “Mercedes can do no wrong, Ferrari can do no right.”

“Ferrari have got a very good car when it’s in a sweet spot. When it falls out of that, they can’t get the job done. Barcelona is the true teller. If they come away behind Mercedes then sadly, they’ll be dominant all the way.”

Apart from offering their drivers insufficient firepower to even nudge Merc, once again the Red pitwall made some questionable strategy calls.

From eighth on the grid, with the harder tyres, Leclerc made his way into the lead at a point when the maths favoured the Monegasque, could have made the call to pit him a little earlier than planned to capitalise on the lead he had wrangled.

But they kept him out way too long and what might have been a podium (or better) was again fumbled down to a fifth place. The fastest lap late in the race by Leclerc was hardly consolation for what might have been far more points had his team not fumbled the numbers yet again.

Di Resta was equally perplexed by the conservative approach, “Ferrari had to be aggressive on this one. Why say you have to do 15 laps to be safe to make it to the end? They did the pit stop at the end because they had the buffer to get the fastest lap.

“Even if they had to do the extra stop, they had to be aggressive after starting from eighth,” reasoned the former F1 driver.

Adding insult to injury is that when they finally called the #16 car into the box, they messed up the pit exit sums and Leclerc found himself staring at the back of Pierre Gasly’s Red Bull on old tyres. The red car wasted two long and slow laps behind the blue one.

F1 World Champion Damon Hill was equally bewildered by the strategy, “All teams make mistakes, but for a team like Ferrari to have taken a gamble on the medium tyre [in qualifying] – was it really necessary?”

“Charles crashed the car, he might not have done that had he been on the softer tyre.”

“They’re very good at proving they have the pace when it doesn’t count. Mercedes are so mature now, they don’t have to show what they can do. They just know where they truly stand.”

In the end, the stats tell the truth which for the Tifosi makes for ugly reading as Mercedes top the constructors’ standings on 173 points with Ferrari trailing on 99, while Bottas leads the drivers’ standings 87 points to Hamilton’s 86 with Vettel on 52 and Leclerc on 47.

Big Question: Are Ferrari their own biggest enemy?