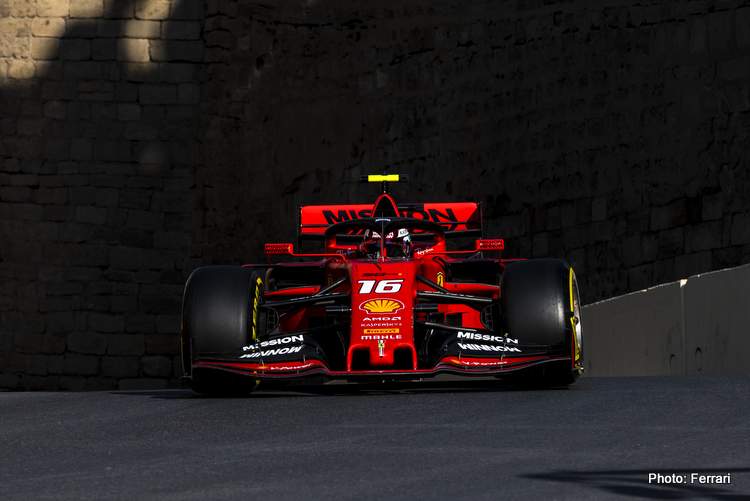 Friday at the Azerbaijan Grand Prix was pretty much a half day, given that the scheduled three hours of track time was reduced to slightly less than 90 minutes.

The first session was stopped after 13 minutes when a manhole cover came loose in the first sector of the 6.003 km long track, and did not re-start.

Then, in the second session, there were two red flag interruptions, which reduced the scheduled time by 18 minutes. Therefore one cannot read too much into the lap times, as teams had to adjust their programmes to fit the available time.

FP1. In the first session, Scuderia Ferrari Mission Winnow was the only team to set a time. Charles Leclerc did 5 laps with a best time of 1:47,497. Sebastian Vettel did four, the fastest being a 1:49,598. Both drivers used the Medium tyre.

FP2. All the teams tried to make the most of the afternoon session. Charles and Sebastian worked on an evaluation of some aero updates fitted to the SF90.
Then they focussed on set-up for the race and qualifying, using the Medium and Soft compounds, setting their fastest laps on the latter, doing 28 laps each. Charles did the fastest lap of the day in 1.42,872 and Sebastian was second in 1.43,196.

Programme. Tomorrow’s third and final practice session to prepare for the race and qualifying takes place at 14 local time. Qualifying is at 17 (15 CET). The race on Sunday gets underway at 16.10 (14.10 CET).

Charles Leclerc: “After a day like today, it’s difficult to get a clear picture of where we all stand, especially in terms of long-run pace, when I think traffic was a factor. In qualifying trim, I felt comfortable, but also in this aspect, we will have to wait until tomorrow to get a clearer picture.”

“However, we still have quite a bit of work to do to get the maximum out of the SF90 and that’s what we will concentrate on in the final free practice session. If we manage that, then we can be competitive.”

Sebastian Vettel: “It was a rather complicated Friday because we weren’t able to do much running and the track was slippery and dusty. But it was fun all the same. So it took a while to get into a rhythm but overall I feel comfortable with the car.”

“Maybe tomorrow we should be able to get a better idea of where we stand because while I felt good in the car, there’s definitely still room for improvement.”

Tomorrow, we will continue working as it’s vital to get into a rhythm and have a good feel for the car and be totally confident about the track. I think qualifying will be very close because I imagine our rivals will be very fast tomorrow.”