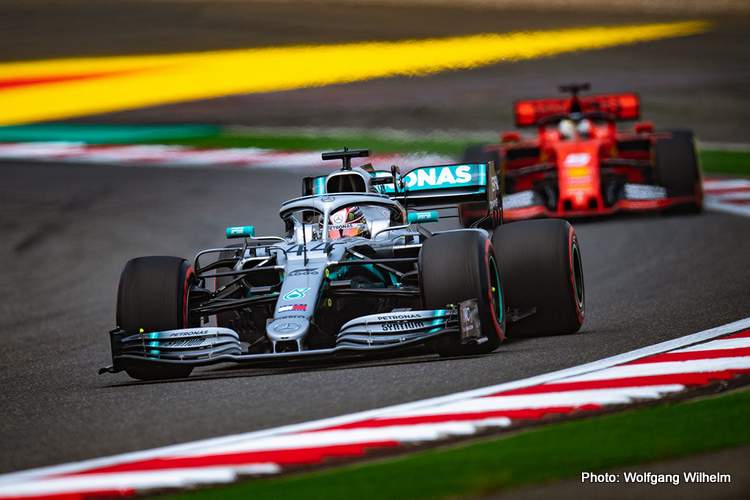 The first three races of the Formula 1 season have made a mockery of pre-season predictions that Ferrari would set the pace and leave Mercedes struggling to keep up.

The standings may not tell the full story, and luck has played a part, but on paper Mercedes are more dominant than ever while Ferrari have fallen well short of expectations.

“We’ve soon got to stop talking about Ferrari this, Ferrari that, Ferrari amazing power… because they are not delivering,” said former grand prix driver and Sky Sports commentator Martin Brundle.

Mercedes, the team that have won every championship for the past five years, completed a hat-trick of successive one-two finishes at Sunday’s Chinese Grand Prix.

The only reason Mercedes cannot claim a perfect start is the introduction this season of a point for the fastest race lap, with Ferrari’s Charles Leclerc quickest in Bahrain and Red Bull’s Pierre Gasly in Shanghai.

Otherwise, they have done something that escaped even Ferrari during the golden era when they won six successive constructors’ titles and Michael Schumacher five championships in a row between 2000-04.

The last team to start a season with three successive one-twos was Williams, with Nigel Mansell and Riccardo Patrese, in 1992.

“Considering it was a real struggle this weekend, I’m really grateful for the result, said Hamilton, Sunday’s winner.

The Briton was right to point out it would have been a different story if Charles Leclerc’s Ferrari had not lost power while leading in Bahrain but ‘could have, would have, should have’ never won anything.

“I’m just not sure they’ve really hooked up a proper solid weekend just yet,” said Hamilton, now back in the overall championship lead.

“It was looking like it was going to be a solid weekend for them in Bahrain and then it started to tail off. This weekend, they were a bit up and down.

“I think we’re over-delivering a little bit at the moment to our true potential but there’s still more to come,” he added.

Ferrari were quicker down the long main straight in China but Mercedes, whose engine has been the best of recent years, gained through the corners.

China was seen as a track where Ferrari would have the upper hand but it was Mercedes whose drivers lined up first and second on the grid.

“Our car is maybe a bit draggier than theirs,” said Wolff. “On the speed and power we need to leave no stone unturned but in terms of managing the tyres, the downforce levels helped obviously.”

The champions also got their strategy spot on, double-stacking their drivers brilliantly in a seamless pitstop on Sunday, while Ferrari invoked team orders in a move that backfired.

The battle for supremacy is between Mercedes and Ferrari, with Honda-powered Red Bull challenging for podiums, but Ferrari leave China with more pressure on them.

Nico Rosberg, the retired champion who won the 2016 title with Mercedes, agreed the Italians had work to do.

“I’m hearing from the Ferrari guys that they’ve got their car in the wrong aerodynamic window at the moment,” he said. “They need to make changes internally but it’s going to take time.

“They are only very good at the ultra-high speed tracks at the moment and as soon as there are more corners, then they are struggling. So they’re in the wrong place at the moment with the car.”