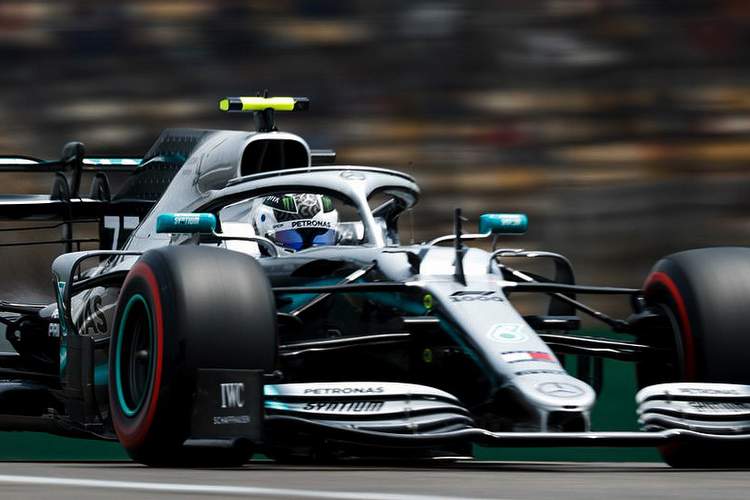 Valtteri Bottas beat Mercedes teammate Lewis Hamilton to pole position for the Chinese Grand Prix, on a day the Finn would not be denied outshining Lewis Hamilton in the sister car, while Ferrari simply did not have the firepower to challenge the silver cars.

Saturday in Shanghai belonged to Bottas, after topping the timesheet at the end of FP3, he had all the answers in the afternoon qualifying session and popped a 1:31.547 to on his final run which no one had an answer to.

Bottas said, “It’s been a good weekend so far. Felt really comfortable today. Honestly struggled to get the perfect lap in Q3 but it was good enough. The lap was OK. Not completely how I want it. The car has been really good this weekend and Lewis improved a lot. It was super close.”

On the other hand, Hamilton, who has not been fully comfortable since track action began in China, kept his powder dry until the final run in Q3, but it was not enough to beat his teammate on the day.

The World Champion summed up his session, “I didn’t give up, I kept pushing. Valtteri has been stellar all weekend. I’ve been fighting the car but I’m much happier. It was eight tenths at one stage so to be as close as we are at the end is fantastic. It’s an incredible result for the team.”

It was another front row lockout for Mercedes and Bottas’ first pole position in China, compared to Hamilton’s six poles and five wins at the venue.

Theories that Ferrari have the stronger package were rubbished as their drivers were three tenths shy of the prime time with Sebastian Vettel third quickest, a mere 0.017 of a second ahead of teammate Charles Leclerc.

Vettel said of his effort, “Right from Q1 Mercedes seemed to start from a better place. I think we had a good session, maybe there was a little bit more.I was actually quite happy I managed the final attempt because it was quite marginal on time.

“I think there was maybe a little bit more but not enough to beat these guys today. They are bloody quick in the corners. When we get close we have an advantage on the straight line so maybe we can do something there.”

Max Verstappen appeared capable of splitting the Ferrari pair, but the Dutchman had a scrappy final Q3 warm-up lap which forced him to scupper his effort. Nevertheless, his early flyer was enough for fifth, albeit half a second down on the top time.

His teammate Pierre Gasly was sixth fastest, but eight tenths adrift of the Dutchman in the sister car.

The Renault duo of Daniel Ricciardo and Nico Hulkenberg were seventh and eighth respectively, followed by the Haas drivers Kevin Magnussen and Romain Grosjean rounding out the top ten.

If the results stand, row one will belong to Mercedes, Ferrari will own row two, Red Bull row three, Renault row four and the fifth row to Haas.

Kimi Raikkonen, the former Ferrari driver and 2007 world champion, failed to make the final phase of qualifying for the first time since 2016 and will start 13th for Alfa Romeo.

Williams drivers George Russell (17th) and Robert Kubica (18th)were slowest of the runners but will line-up on the penultimate row of the grid because Alfa Romeo driver Antonio Giovinazzi failed to set a time, due to a technical issue, while Alexander Albon did not take part in qualifying after a crash in final practice left his Toro Rosso a proper wreck. They will make up the back row.

Bottas was to the fore early in Q1, and the Finn claimed top spot thanks to a lap of 1:32.658. That left him almost half a second clear of team-mate Hamilton, who ran wide exiting the final corner. Verstappen put in a lap 1:33.274 to take P3 ahead of Vettel and Hulkenberg. The top five would sit out the final runs.

Eliminated at the end of the segment were Stroll in P16 with the Canadian exiting ahead of Russell and Kubica. Also out was Giovinazzi who failed to set a time in Q1.

Bottas held P1 through the final runs, but Leclerc who caught traffic on his first run and lay in 10thahead of the final laps, vaulted to P2 with a second effort drop Verstappen to fourth place.

Bottas once again stamped his authority on the session setting a benchmark of 1:31.728 in the first runs of Q2. Vettel got closest to him, though the German was half a second back ahead of Leclerc, Verstappen and Hamilton, who once again made a mistake on his lap.

Mercedes opted to run again at the end of the session with Bottas bolting on a set of soft tyres, but Hamilton opted instead for mediums and it was he who topped the session, the Briton posting a time of 1:31.637 to finish a tenth ahead of Bottas lap.

Bottas returned to the top of the order in the first runs of Q3, but only just. The Finn edged team-mate Hamilton by just 0.007 to take provisional pole, with Vettel third.

Verstappen put in a good lap of 1:32.089 to sit in fourth ahead of Leclerc, and the second Red Bull of Pierre Gasly.

There was disappointment for the Red Bulls in the final runs though. Held up through the final corners during their out laps, neither Max nor Pierre was able to get across the line in time to complete a final flying lap, a situation that infuriated the Dutchman.

The traffic problems allowed Leclerc to jump to P4 with his final run to sit alongside Ferrari team-mate Vettel, who narrowly squeezed past Verstappen at the end of the out laps and managed to get across the line in time to complete a final lap.

Leclerc’s move up the order handed Ferrari ownership of row two with Red Bull set to start from row three tomorrow, ahead of Ricciardo, Hulkenberg, Magnussen and Grosjean.

At the top of the order Hamilton couldn’t find the pace to oust Bottas from P1 and thanks to a marginal improvement the Finn took his seventh career pole by 0.023s. 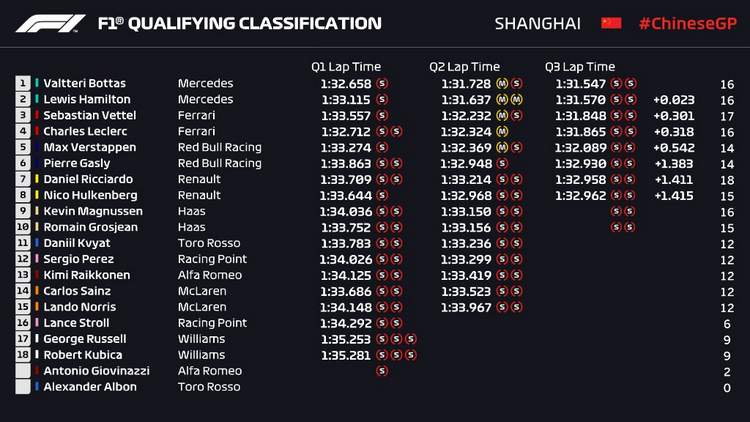