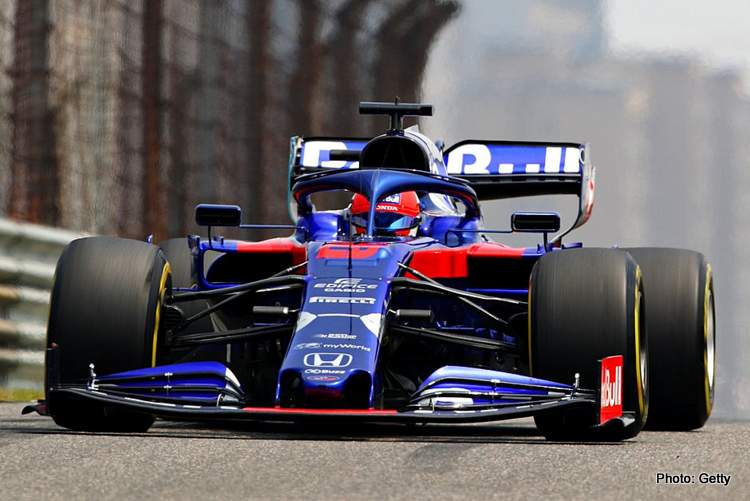 Toro Rosso report from day one of the Chinese Grand Prix weekend, Round 3 of the 2019 Formula 1 World Championship, at Shanghai International Circuit.

Alexander Albon: “Today was a pretty good day for us. I spent the first session exploring and getting an idea of the circuit – it’s a technical track and there’s a lot of different lines you can take but I got to grips quite quickly with it.”

“The more time I get in the car, the more I’m comfortable learning a new track so I feel a bit more confident with the car straight away. Between the two sessions, I put to practice what I learned from FP1 to FP2, but there’s still a few things I want to try in FP3. I was happy with how the day went, it looks like our long run pace is quite competitive, although there’s definitely a bit of time left in the car.”

Daniil Kvyat: “FP1 was very productive, we completed all of the laps we had planned and we were happy with our competitiveness. In FP2, we lost quite a bit of time due to the precautionary PU change, so we were put on the back foot once I was able to get going. Everyone was on their high fuel runs so I spent most of my time in traffic. Despite all of this, we are pretty happy where we are, we just need to keep digging for tomorrow.”

Jonathan Eddolls, Chief Race Engineer: “Overall, it’s been a fairly busy day. In FP1, each driver had two prime tyres and the focus was to take what we learned at the Bahrain test and put that into practice, so we ran some setup work on the same tyre type across multiple runs. We also spent time tuning mechanical setup items and aero platform work which gave us some interesting results.”

“The track started very slippery which meant extremely high track improvement. Tyre graining is always a potential issue at this circuit, particularly on the front left, so we did a long run at the end of FP1 to assess how the tyres would hold up. Even with the track temperatures on the colder side, the tyres performed better than expected.”

“On the last lap of Dany’s run in FP1, Honda noticed an anomaly on the PU side, so we elected to cut his run slightly short and decided to change the PU as a precaution. The mechanics did a very good job to get the car turned around and running again halfway through FP2, although, this meant we had to compress Dany’s programme.”

“Traffic becomes a problem when you do a low fuel run while the rest of the field is on a race simulation during FP2, however, the team did a good job to find a reasonable window so Dany could get a couple of clean laps in. He was able to improve and put in a competitive time, which we were happy with as it was only his second lap of the session.”

“Alex completed a more conventional FP2, having two short runs on the base followed by option tyres before moving onto the long run. We made some setup changes from FP1 to FP2 based on the data from the first session and it was good to see those changes pay off given how tight the midfield is.”

Toyoharu Tanabe Honda F1 Technical Director: “A tricky first day in China, as we spotted an irregularity on the data from Daniil’s car and decided to change the PU before FP2. Inevitably, this meant Daniil was unable to go out at the start of the session, but well done to the team for getting him back on track for the final 45 minutes.”

“We will now send the original PU back to HRD-Sakura for further investigation and also we will analyse the data here at the track. This is Alex’s first time at the Shanghai circuit and he had a trouble-free day. Once again, here in China, the times are incredibly close in the mid-field, so tomorrow’s qualifying will be very important.”