Binotto: Charles is a motivating factor for Seb 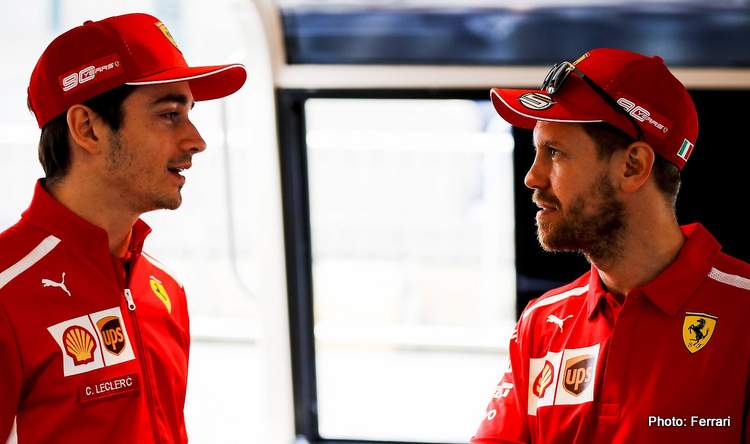 Sebastian Vettel still has priority at Ferrari in 50-50 situations but that could change during the course of this year’s Formula 1 World Championship, team boss Mattia Binotto indicated with regards to team orders.

The four times Formula 1 world champion has been the Italian team’s number one in recent years but new recruit Charles Leclerc was quicker in Bahrain two weeks ago.

Leclerc, 21, started on pole position at Sakhir but fell behind before then overtaking the German, setting the fastest race lap and taking his first F1 podium.

The Monegasque, who finished third, would have won had his car not suffered a loss of power while leading with some 10 laps to go. Vettel has yet to stand on the podium in two races this season.

Binotto told reporters at the Chinese Grand Prix that the team came first, “As I said at the start of the season, if there is any 50-50 situation where we need to take a decision, the advantage would have been given to Sebastian simply because Sebastian has got most of the experience with the team in F1.”

“He won four championships and certainly for us he’s the driver who has most probability to challenge for the title. Something we agreed with both drivers is, in a few races’ time, things may change for whatever reason – bad luck or whatever could be the situation – we may change our position, no doubt.”

Binotto said the pair remained free to fight on track and if either was clearly faster than the other would be given preference. Leclerc, he pointed out, had the opportunity to take pole position and fight for the win in Bahrain.

The Monegasque ignored a team order to stay behind Vettel in Bahrain, pointing out that he was quicker. There were no recriminations.

Vettel made errors in Bahrain, spinning while trying to defend second place from eventual winner Lewis Hamilton, and said afterwards that he had ‘homework’ to do.

Asked also whether Leclerc was giving Ferrari a headache with his pace, Binotto said that was “a luxury that you’re happy to have.”

“We’ve got two fantastic drivers and I think that Charles is a motivating factor for Seb,” he added.

Binotto also complimented Leclerc for his reaction to the disappointment of having a first win seized from his grasp by bad luck.

“He did a great quali, a great race but more than that, I think he has been fantastic on the post-race comments, showing that he’s really a mature driver,” said the Ferrari team boss.