Alonso: You need to make perfection every lap 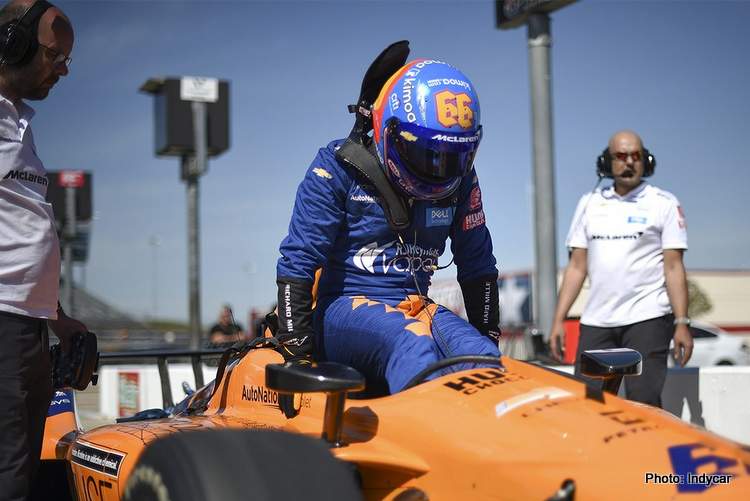 There are 47 days until the 103rd Running of the Indianapolis 500 presented by Gainbridge, but on-track preparations for Fernando Alonso have already begun.

The 37-year-old Spaniard spent Tuesday getting acclimated to the No. 66 McLaren Chevrolet during a private one-car test at Texas Motor Speedway.

“It was definitely quite special,” Alonso told IndyCar.com “The oval is very different to (Indianapolis Motor Speedway), so you feel really the banking and you feel the compression on the body. It’s definitely physically different, the feeling you get, so that was interesting.”

The outing gave Alonso, a two-time Formula One champion, the opportunity to re-ignite the memory banks with the various tools an Indy car offers as he prepares for his second Indy 500. More importantly, this was the first time that the test car built by McLaren’s Indy car team, in collaboration with NTT IndyCar Series team Carlin, turned laps.

In 2017, Alonso and McLaren partnered with Andretti Autosport, which provided the car, engineering and expertise. This is a McLaren effort in 2019 and Alonso came away from the test relatively satisfied with the work as he and his team march down a new path.

“It’s a little bit more of an unknown situation for all of us,” Alonso said. “We believe in different philosophies in terms of setup and ways to prepare the cars. So we are experimenting those. We started with a baseline setup that we know has been used in the past, but slowly we tried to test different things. Today was the first day and in Indianapolis it’s going to be a little bit more deep into that.

“A lot of work on the simulator (has been done) as well to explore these different roads, and let’s see what we can find.”

The morning saw the team execute a single installation lap and battle several small issues that hinder most new squads. The afternoon proved a different story as Alonso managed to put in 105 total laps in warm and windy conditions.

With his only oval run coming two seasons ago during the final year of the competitive manufacturer aero kit era, Tuesday’s test marked the first time Alonso had driven an Indy car with the universal aero kit on a superspeedway.

Even with just a single NTT IndyCar Series race under his belt, Alonso knew the 1.5-mile TMS oval is not something that will serve as an ideal comparison to the iconic 2.5-mile Indianapolis oval in May.

“This track is so different that it would be unfair of me to compare the two kits because it’s not the same place,” Alonso said.

“I remain on the idea that this universal kit is said to be more difficult to drive with a little bit less downforce. So you need to optimize the setup a little bit different with this kit and it will depend on a little bit of that week (during the April 24 open test at Indianapolis Motor Speedway) on the wind conditions, the temperature and, more importantly, especially for me, how these kits behave in traffic.

“Running alone normally is a little bit easier, but in traffic I think it’s going to be challenging when you lack downforce.”

The IMS test is exactly where the focus was for Alonso from the moment he stepped out of car for the day and sat on the pit wall. The test car used at Texas was prepared at Carlin’s shop in Delray Beach, Florida. For the IMS test, Alonso is expected to have his primary race car that was build at the McLaren Technology Centre in Woking, England.

“Looking forward to go to the open test first, to set up really there with the team and the car and start improving the car and being hopefully competitive in May when the race comes,” Alonso said.

“It’s going to be tough, as we knew. These setups, we know how delicate they are, how extreme they are. So small changes make a big difference on the lap time, a big difference on the feeling. The track is never the same. It keeps changing all the day from the morning, cold temperatures through the afternoon, quite hot, quite windy in the afternoon.

“I think Indy also is quite a windy place, so you need to keep chasing the track conditions with a setup. It’s going to be a big challenge and we are ready to take it.”

Overall, Alonso continued to respect the challenges to compete at the highest level in North America’s premier open-wheel championship.

“I came from different series that there was a scenario you can be touching the grass a little bit and can lose that lap,” Alonso said. “Here, there is not that scenario in any of the corners, so you have to be on top of your skills every single lap, every single corner. That’s quite demanding and quite stressful.

“This (test) day, it has been also in that way, just to remind myself how critical everything is here. You need to make perfection every lap.”

The Wednesday, April 24 open test at IMS will feature most of the entries expected for the 103rd Indianapolis 500. Official practice begins Tuesday, May 14, with qualifications to set the 33-car field May 18-19. The race is set for Sunday, May 26, with tickets available at IMS.com.