Alonso: I’m the best in the world and I want to prove it 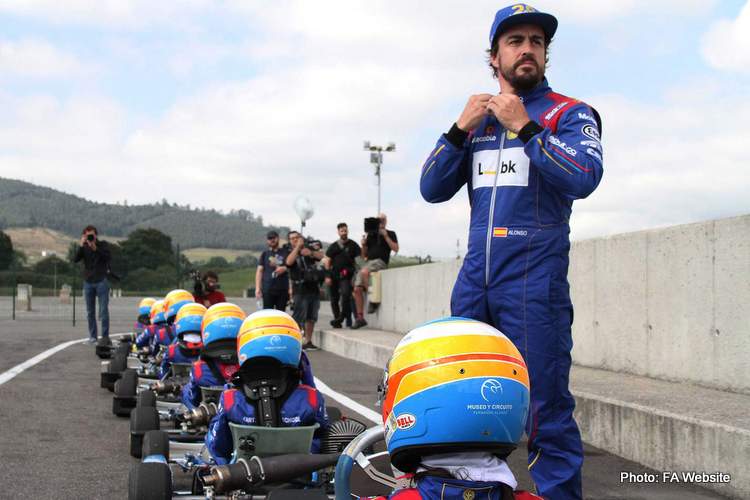 Fernando Alonso believes he is the best race driver of this era and, in a recent interview, he revealed that the fact he is simultaneously tackling a number of vastly different motorsport disciplines is part of his plan to prove that he is indeed the best in the world.

In an interview with Mundo Deportivo, Alonso said ahead of his recent Formula 1 test with McLaren in Bahrain, “I believe I’m the best in the world and I want to prove it. I’m looking for something that is unprecedented in sports. I was competitive for many years in Formula 1 and I have been lucky to be a champion. My last season was the best, I beat my teammate 21-0, something I had never done in my career.”

But that was clearly not enough for the Spaniard who decided there was no light at the end of the tunnel to McLaren’s performance woes – podiums and victories highly unlikely – and at the end of last year he decided to quit the top flight to focus on winning iconic races while his quest for the Triple Crown of Motorsport remains a priority and very much on track.

Alonso pointed out, “I’ve won at Le Mans, Sebring, Daytona, hopefully I’ll be competitive at Indianapolis and do other things off-road. I’m looking for something that is unprecedented in sports. Maybe one day I’ll get into a Formula 1 car or any other car and find someone faster than me. So far it has not happened.”

Before the two day Bahrain F1 test, the 37-year-old made a trip to South Africa to test Nasser Al Attiyah’s Dakar Toyota Hilux and then a day after his Sakhir appointment he jetted to Paul Ricard for WEC testing with Toyota Gazoo Racing – the veteran experiencing three very different disciplines of the sport within ten days.

Asked how he adapted to the vastly different race cars, Alonso said, “It’s a challenge. When I try these cars it’s not about fun, it’s about putting all my effort into it. All this is very demanding and it is not as fun as people think.”

“I put a lot of effort into everything I drive. There is no time to adapt in the cars. You must immediately remember the systems, how everything works and where everything is turned. It’s not fun, it’s dedication.”

Alonso made his debut for Toyota in the WEC last year and after six rounds of the two-year Super-Season, he has won at Le Mans, Spa Francorchamps and Sebring, and is looking a sure bet for the title with teammates Sebastien Buemi and Kazuki Nakajima.

But he revealed that it was not as easy as it appeared, “If I look at Spa, a year ago, I did not have any experience in endurance, except for the Daytona race in 2018, but a lot had happened to me: I said goodbye to F1, I won at Le Mans and also at Daytona.”

“If looked at my end of the season in 2018 with Suzuka, Fuji, Austin Mexico, Brazil, China and Abu Dhabi on the trot, it was a great challenge, this focus and effort continued throughout last year. ”

“I think I keep improving every time I get in the car. There are always new elements to sample, new software, development updates mean we have different things on the car to what we had in Sebring a month ago. You always have to update yourself and every time you jump into the car things get better.”

When asked about the difference between F1 and the LMP1, Alonso replied, “Initially your driving is not efficient enough, [the LMP1 Toyota] requires a specific style of driving, you have to be efficient, you have to be gentle with the brakes to regenerate as much recovery from the hybrid system as possible, very precise with the accelerator and no room for error on the exit of turns because you need the energy for the next straight. Very precise, no doubt.”

“In an F1 you forget there is so much grip, more power, fuel… I’ve been lucky enough to try very different cars in recent years – I even did a test with Honda on MotoGP bike – and it is very interesting to see what each car is able to do on different terrains and I am always positively surprised by each one.”

Earlier this year, after winning the Daytona 24 Hours, with Wayne Taylor Racing, the double F1 World Champion made it known he would fancy a drive in an off-road machine, and of course Toyota Gazoo Racing obliged with a test in Al Attiyah’s Dakar winning Hilux.

Alonso explained, “In general, I have to carefully consider driving in rallies. It is one thing to do a test and have fun and another to go fast. It’s something that I have to evaluate in the next two months. At the moment I focus on Spa, Indianapolis and Le Mans. Until July, I will not consider anything regarding my future.”

Meanwhile, it is well known that bosses of the upwardly mobile Formula E series are keen to attract Alonso to race in the premier electric championship, but when asked if this was an option, he replied, “For the time being no. I will evaluate my 2020 possibilities this summer.”

“My priorities are the races that I have ahead. I want to have fun and go to events that are prestigious enough to be interesting. There are many races and categories, some well-known others not, you have to combine where you can have fun and what can give prestige to your career. ”

Beyond actual driving, Alonso also has interests in a karting track and has added a Formula Renault to his portfolio of projects, all which keep him on the move and in constant demand.

“I’m going to have to go back to F1 and see if I can relax a bit,” he joked before adding, “I thought I would have much more time after leaving F1, but it has not been like that.”

“I’m also very involved with the Museu Y Circuito Fernando Alonso, where we have a new campus in summer, with new kids. I am also involved with Formula Renault, which is my first experience owning a single-seater team. We run at Monza in two weeks and it will be exciting. I will be there for sure.”

Apart from his three WEC wins, including last year’s Le Mans and the Daytona 24-Hour victory, Alonso won 32 F1 races and was back-to-back World Champion in 2006 and 2007. He made 311 starts in the top flight, finishing on the podium 97 times.

Big Question: Is Fernando the best in the world?