Hamilton: Charles has a beautiful bright future ahead 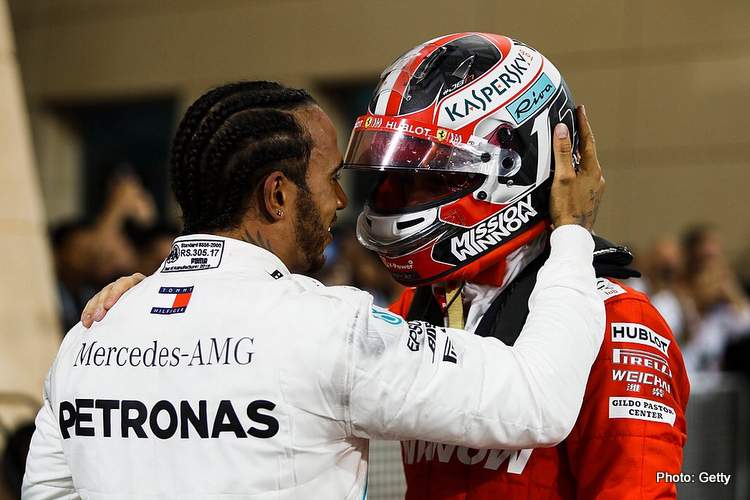 Lewis Hamilton says Charles Leclerc will come back stronger from the late engine failure which cruelly denied him a maiden win at the Bahrain Grand Prix in Manama.

Leclerc, 21, was on course to become Formula 1’s third-youngest winner following a brilliant drive for Ferrari, but with 11 laps remaining of a dramatic race – one which also saw Sebastian Vettel spin out of contention – a mechanical failure struck Leclerc’s car, costing him a crucial 30mph in straight-line speed.

The young Monegasque was a sitting duck as Hamilton sailed by to go on to claim his 74th career win and the first of his championship defence.

Valterri Bottas also made his way past Leclerc to seal an unlikely Mercedes one-two and ensure he remains ahead of Hamilton in the standings by just one point.

“I’m sure this is a devastating result for Charles as he had done the job to win the race,” said Hamilton.

“He has been incredibly rapid and was quickest in all sessions, and truly deserved the win. He’s got a beautiful, bright future ahead of him, so this will only make him stronger.

“I’ve been in a position like that where we’ve been in the lead many times when the car has stopped and I know how it feels.”

“But it’s always good to look at the glass half full because today he still got some great points even though he had that problem. He was an outlier all weekend and faster than his team-mate.”

Vettel has endured a troubling weekend in the Gulf Kingdom. Three-tenths of a second slower than Leclerc in qualifying, the German was unable to match his inexperienced team-mate in the race, too.

The four-time world champion took the lead off the start line, but Leclerc fought his way back past on lap six. Then, on lap 38, while duelling for second position with Hamilton, Vettel lost control of his Ferrari and spun.

His front wing also dramatically fell off his car and by the time he had stopped for repairs, he emerged in ninth. Vettel recovered to finish fifth, but the German left Bahrain under pressure following what was his fourth spin from his last 10 appearances.

“I am happy for the team but it was a disappointing race,” said Vettel.

“Starting at the front and not finishing there is not what we wanted. I didn’t have the pace I wanted, and on top of that I made the mistake with the spin so it was not a good evening.”

Big Question: Did we witness the changing of the guard at Ferrari in Bahrain?