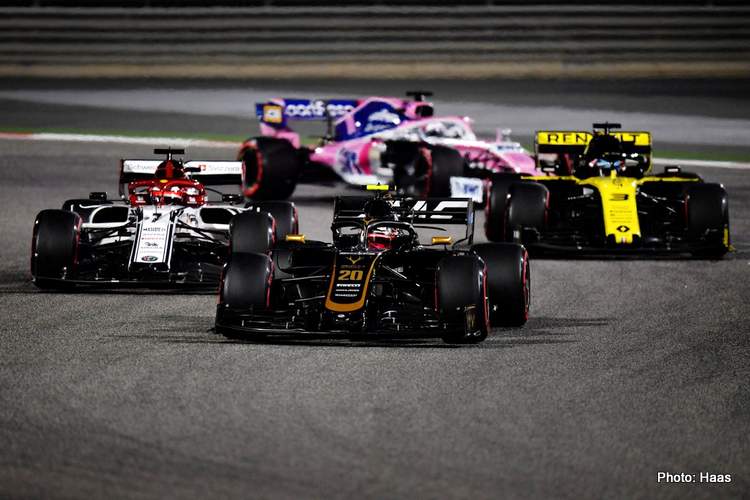 Sunday’s Bahrain Grand Prix at Bahrain International Circuit in Sakhir, the second round of 2019 FIA Formula One World Championship, proved to be a problematic one for the Rich Energy Haas F1 team.

Kevin Magnussen struggled to find pace all evening but salvaged a 13th-place finish while teammate Romain Grosjean could not overcome the effects of opening-lap contact and was forced to retire just 16 laps into the 57-lap race.

But finding all-important grip on what is arguably the most abrasive track surface on the F1 schedule was a challenge from the very start. Using Pirelli P Zero Red soft tires to start the race as did the rest of the field, he lost a position on the opening lap to the McLaren of Carlos Sainz and, seven laps later, lost a handful of positions after drifting wide in turn 10 of the 5.412-kilometer (3.363-mile), 15-turn track, falling back to 10th place.

Magnussen pitted for the first time on lap 11, switching to the Yellow medium tire compound in search of better tire wear as did the rest of the field during their respective opening stops. He resumed in 14th place but continued to find the pace he needed to enable forward movement into the points-paying positions.

Magnussen worked his way up to as high as 11th place on laps 27 and 35, trading positions back and forth in a four-way battle with Sainz, Alexander Albon and Daniel Ricciardo. But, as he continued to lose ground to the top-10, the team decided to bring Magnussen back to the pits on lap 39 while running 14th for a set of used soft tires.

He resumed in 15th, one lap down to the leaders, and held that position until two laps from the end, when the Renaults of Ricciardo and Nico Hulkenberg ahead of him in the order both stopped on track with issues, giving Magnussen his final finishing position of 13th.

For Grosjean, who started 11th, his race was essentially over when Racing Point driver Lance Stroll made heavy contact with his VF-19 while screaming forward from the 18th starting position on the opening lap.

The contact punctured Grosjean’s left-rear tire, forcing him to the pits for a set of medium tires and he resumed at the back of the 20-car field. After completing his 16th lap, the team called him to the pits with significant damage to the floorboard, leading to his second consecutive retirement to start the season.

Tonight’s results dropped the Rich Energy Haas F1 Team one position in the constructors’ standings, tied with McLaren for fifth with eight points apiece as Alfa Romeo Racing moved up to fourth with 10 points on Kimi Raikkonen’s seventh-place finish. In seventh place, two points back of Haas F1 and McLaren, is Renault.

Romain Grosjean: “I didn’t see anything at the start, I got hit from behind, then the car was too damaged to continue ultimately, but I’d lost so much time with the initial rear puncture heading to the pits. That’s always the risk when you start not where you want to start. We should have been starting eighth today, but it is what it is. I think we’ll have a good test on Tuesday to understand what happened today with the pace of the car. It’s obviously not performing as we want it to.”

Kevin Magnussen: “I don’t really know what happened. We were a little bit skeptical about our race pace after Friday, but honestly, I thought we would have corrected that with the changes we made. It’s a little unbelievable to be able to qualify sixth, best-of-the-rest, then be so off in the race like we were. We need to try and understand why we were so far off in the race, having been so good in qualifying. We have some homework to do.”

Guenther Steiner, Team Principal: “It was a very disappointing race, not least with Romain (Grosjean) effectively going out on the first lap, having been run into by somebody. The performance was just not good enough today to get into the points. We need to investigate why this happened, especially after a strong qualifying. We’ll try to find the cause of it. On the plus side, at least we now have two days of testing here, so we can maybe try to learn what happened. We go back to square one and start afresh in China.”