Vettel: I am sure Leclerc wants to beat me 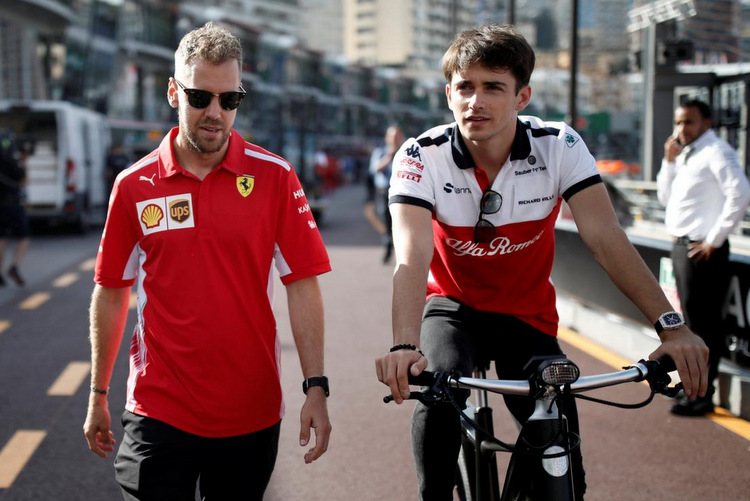 With Sebastian Vettel’s Formula 1 World Championship title challenge over the Ferrari driver is looking ahead to 2019 in which he will team up with Charles Leclerc in what is sure to be an intriguing partnership at Maranello.

Bucking tradition Ferrari have opted for the youth of 21-year-old Leclerc, arguably the top rookie this year on the F1 grid and a driver who is expected to become a new star of the sport.

Vettel, ten years his senior, has enjoyed an unfettered number one status with the Reds since he joined the team with Kimi Raikkonen mostly playing second fiddle to the German in the Italian team.

In Leclerc, he will find a driver with something to prove and ambitions to establish himself as a top gun of the sport. The Monaco Kid’s goal is clear: beat Vettel, because in F1 the first ‘enemy’ is the one within your own garage – your teammate.

And of course, the Reds want their young charge to be the real deal and will throw everything at making this a reality for the youngster. Put it this way: they won’t expect him to play wingman to the #5 Ferrari, quite the contrary in fact…

In an interview with MN, Vettel acknowledged, “It’s going to be different for sure, because Charles is not Kimi and Kimi is not Charles. He is young, so he will have a lot on his head and a lot of things in his mind. So I think for the team we need to work together on track.”

Seb: If I win the next 10 years with Ferrari, then yeah, why not?

“I am sure he wants to beat me, I want to beat him, the rules are clear. It was the same with Kimi. But I think the key is that we work together and, as I said, he will have a lot things going on in his head.”

“I am his teammate, so I am also here to help. I am the last one that is trying to hide or playing any games or anything like that. That is why I think I get along very well with Kimi, because in this regard we are very similar. So we will see,” ventured Vettel.

At 31, with four Formula 1 titles and 52 grand prix victories on his CV, Vettel is now one of the elder statesmen in the top flight in an era in which the sport embraces younger drivers.

Almost a dozen years ago, Vettel himself stepped up to Formula 1 at the tender age of 20 and went on to break several ‘youngest’ records until Max Verstappen came along and owned most of those.

How long before the German calls it quits?

“Well, its another 10 years from now to go as long as Kimi,” he mused. “It is a long time. It’s as long as I’ve been here, so now its halftime basically. I don’t know.”

“We’re looking at 400 grands prix… in total. I don’t know, you should never say never, but maybe not. I don’t know. Depends, you know. If I win the next 10 years with Ferrari, then yeah, why not?” added Vettel.

Big Question: Seb versus Charles, will there be tears?