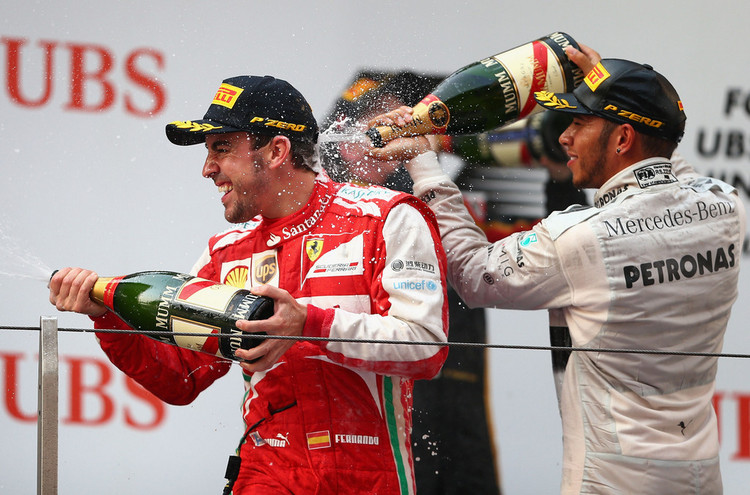 In the wake of Lewis Hamilton’s fifth Formula 1 World Championship title, the likes of Fernando Alonso and Max Verstappen have declared that most to drivers could have won the championship in the cockpit of the #44 Mercedes.

While Alonso finds himself in the once mighty McLaren team that are a shadow of the winning machine the team once was, while Hamilton found himself in the silver of Mercedes that has dominated relentlessly for the past five years and looking to do so for the foreseeable future.

Hence Hamilton argues, as do many, that Alonso’s bad career choices prevented him from winning more titles and told Auto Motor und Sport, “Sure, he could have had more world titles, but it’s not like he did not have the chance.”

The Briton has always been quick to praise the team and equipment he has at his disposal and argues that making the correct decisions at the right time is also key to success in Formula 1, “It just depends on making the right decisions outside the cockpit.”

“If you think like him, you control the driver market, then you should not be surprised if you end up empty-handed. Remember there were also Seb and me on the market at the time.”

“When Fernando gave up his seat at Ferrari, they hired Seb, and [Alonso] did not get Seb’s place at Red Bull because they gave that to Max.”

“Nevertheless, I still have a lot of respect for him. He is a phenomenal driver, and I don’t think his reputation has suffered in recent years, but I do not regret he does not sit in a winning car.”

When the Hamilton decided to quit his alma mater, McLaren, to join mid-grid Mercedes in 2013, many believed he had made the incorrect decision to leave the second most successful team in Formula 1 for what was essentially a start-up.

The British media and of their most pundits at the time lashed out at Hamilton’s decision, predicting doom and gloom for the career of (at the time) the one-time F1 World Champio at the time.

Hamilton explained, “I do not consider myself lucky to end up at Mercedes. Before signing, I did my homework and talked to different people from different teams. I made a list of pros and cons and asked the teams the right questions.”

“From Ross Brawn, I wanted to know then what Mercedes were planning to do to get better. I told him: You have 400 people, McLaren has 800. How do you want to keep up with them in terms of speed of development?”

“The answers he gave me painted a picture that convinced me to sign. I knew it would take a little longer but Mercedes is also such a famous brand that I was sure they would eventually win.”

Indeed time has shown that his critics were well off the mark, while Hamilton hit the jackpot and has since bagged an additional four world titles as well as fifty victories in the top flight all in silver.

The likes of Alonso, Vettel and Verstappen all started in small teams, the Spaniard with Minardi which then morphed into Toro Rosso where the German and the Dutchman got their breaks on the big stage.

Hamilton was fast-tracked straight into McLaren, who at the time were a winning outfit, “Yes, I was fortunate to start my career right away in a top team, but it’s sometimes easier for a young driver to learn in a small team where you do not have that much pressure.”

“Being a rookie in a top team against a two-time world champion [Alonso] then suddenly being famous and travelling so much was a huge job and one of the toughest years of my life,” added the five-time World Champion.