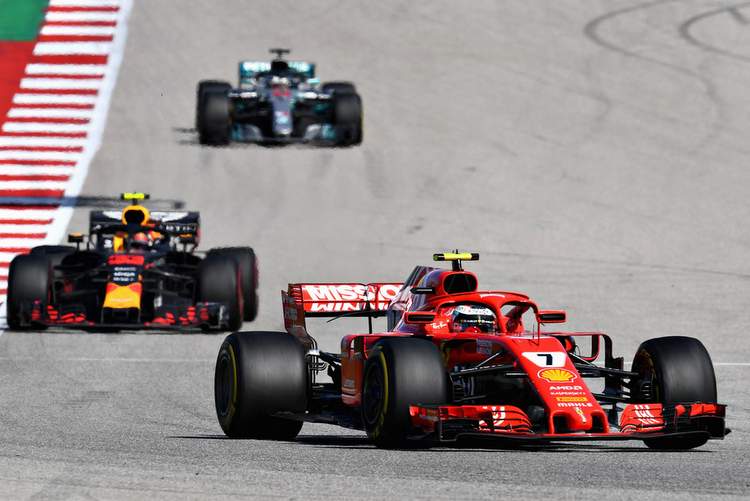 Ferrari driver Kimi Raikkonen ended the longest win drought in the history of Formula 1 when he powered to a thrilling victory in the United States Grand Prix, on a day Lewis Hamilton could have won the title, and nearly did, but had to settle for third behind second-placed Max Verstappen. 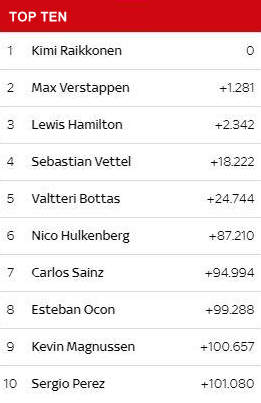 Sebastian Vettel lived to fight another day despite spinning again after making a mistake during a duel with Daniel Ricciardo, the German recovered well and fought back tenaciously to claim fourth place.

With the title undecided for at least another race, the day belonged to Raikkonen and a popular victory it was for the veteran who last won a grand prix in Australia back in March 2013 – 2044 days ago!

The triumph ended Mercedes’ long run of victories at Circuit of the Americas and was Ferrari’s first in the United States since Michael Schumacher won in 2006.

The veteran Finn made a superb start leading out of Turn 1 where he remained for much of the race (apart from the pitstops) which also included a Virtual Safety Car period.

He also did a great job keeping Hamilton at bay before the pitstops when the Mercedes was on a charge. The Ferrari became substantially wider during that crucial period and then, for the final ten laps he was relentlessly stalked by Verstappen and Hamilton, but the driver in the #7 car made no mistakes to claim his 21st F1 career win.

Afterwards, the Iceman cracked a rare public smile when he said, “We had enough speed and kept it consistent. It’s been a long time but here we are again. I’m much happier than finishing second… I’m happy.”

“Maybe they (the fans) are happier, it’s been a great weekend, the car has been good all the time. I got a good start and I ended to push hard and the tyres were not in their best shape towards the end. Max had the same problem and Lewis but we had enough speed and kept it consistent,” added Raikkonen.

Verstappen delivered a solid and mature performance, blitzing from 18th on the grid to take second place, harassing the Ferrari all the way to the finish line and keeping a feisty Mercedes at bay in the process and inadvertently keeping the title chase alive.

Verstappen said after the race, “A bit unexpected, a good start, good first lap very quickly we were into P5 then we could follow the leaders. We made the right call to undercut Valtteri on the last three laps I ran out of tyres. I destroyed my shoe, pushing it hard but all good.”

“We were really struggling with the rear tyres, it was a good fight. I was pushing as much as I could, but clearly Lewis was on the edge too,” added the Dutchman.

Hamilton came desperately close to wrapping up the title, had a jaw-dropping go at the Red Bull driver for second but came off second best with the chequered flag in sight.

For the Mercedes driver third place was simply not enough on the day but he heads to Mexico with a 70 points lead over Vettel, with three rounds remaining and a maximum of 75 points on offer.

Five points will do it for Hamilton next weekend, he summed up his afternoon in Texas, “A big congratulations to Kimi, he did a great job with no mistakes. He had a great start and managed to go all the way.”

“Max did a great job too, he was on a better tyre than us at the end, so naturally a bit of a struggle for us but it was the best we could do in the end. At least we could have a good race. But we’ll leave it until next weekend.”

“I came out ahead in the pit, but the window was closed and it was way too far to come back from. I don’t know how our strategy ended up like that, and you only have a short time to do a fast lap on new tyres and I missed it. Ferrari picked up their pace this weekend, so I look forward to the next race,” added the World Champion.

His title rival made another glaring error in the heat of battle, coming from fifth on the grid he went wheel-to-wheel with Daniel Ricciardo on the second lap as they tussled fo r fourth place, the Ferrari driver again coming off second best as he spun out and tagged the side of the Red Bull.

Thereafter the German drove a gritty comeback race, hauling in Valtteri Bottas on the final few laps to claim fourth and keep his slender title hopes alive for at least another week.

Renault had their best result of the season with Nico Hulkenberg and Carlos Sainz, finishing sixth and seventh respectively, winning the tight contest for Best of the Rest status.

Force India also had a double points score with Esteban Ocon eighth and Sergio Perez tenth, the Pinks split by Haas driver Kevin Magnussen in ninth. After the race Ocon’s car was under investugation for an apparent breach of fuel flow rules.

Fernando Alonso’s final United States Grand Prix was a sad one, his McLaren punted by the Williams of Lance Stroll during a first lap melee which ended the Spaniard’s race on the spot.

Stroll recovered to finish last of the cars still running, slapped with a penalty for causing the collision with Alonso.

Since this report was written:

At the start, Räikkönen got the jump on Hamilton and stole the lead as the field made its way through Turn 1. Behind them Ricciardo held P4 behind Valtteri Bottas but later in the lap was attacked by fifth-on-the-grid Vettel.

The German got a run on the Red Bull driver into Turn 12 and took the position, but his exit was poor and Ricciardo got a shot at reclaiming fourth as they went into Turn 13. Vettel took a wide line, pushing Ricciardo to the outside of the asphalt. The Australian tried to remain inside the track limits but they banged wheels and Vettel was sent into a spin. The Ferrari driver dropped to P15, but Ricciardo was able to hold fourth place.

Further back, Verstappen was on a charge. After starting from P18 he was 14th by the end of the opening lap, and over the following eight laps rose to fifth place, just under seven seconds behind Red Bull team-mate Ricciardo.

That would become fourth on lap nine. As Ricciardo exited Turn 1 at the start of the lap, he suddenly slowed. The Australian pulled over at the side of the track and stopped, a suspected battery issue ending his race.

The stoppage, at the edge of the track, led to the Virtual Safety Car being deployed and Mercedes took the opportunity to pit Hamilton from P2 on lap 11. The Briton took on soft tyres and emerged just ahead of Verstappen. Hamilton then moved back into second place when Bottas let him past on lap 13.

Vettel, meanwhile, had clawed his way back into contention and by lap 15 had made his way to fifth place, 21.5s behind his race-leading team-mate and 9.0s behind Verstappen.

Ahead and armed with new soft tyres, Hamilton began to quickly close on Räikkönen and on lap 17 he was just 2.4s behind the Finn. However, over the next half dozen laps, Räikkönen defended brilliantly to keep Hamilton at bay, but more importantly he slowed Hamilton’s progress and allowed Vettel to close on the leading pack. When Räikkönen finally surrendered on lap 21 and dived for the pits to shed his starting ultrasofts, Vettel was 12s off new P1 man Hamilton, though he required a pit stop.

Verstappen was next into the pits, taking on soft tyres on lap 22. That put Vettel into second place, but the German was beginning to struggle on his starting supersofts. As such, Räikkönen quickly moved past his team-mate to regain second place and a lap later Verstappen swept past Vettel as the Ferrari man was called to the pits for new tyres. The German took on soft tyres in his stop and rejoined in fifth place. Hamilton now led ahead of Räikkönen, Verstappen, Bottas and Vettel.

Räikkönen’s race then switched to attack mode as he began to edge towards Hamilton and between lap 30 and 33 he turned a 16.3s deficit to the title leader into a 13.7s gap. Verstappen also began to close in on Räikkönen and on lap 35 he was just 3.9s behind the Finn.

Hamilton’s times continued to drop and at the end of lap 37 he dived towards the pits and took on another set of soft tyres. Räikkönen now led again, with Verstappen now in P2 ahead of Bottas. Hamilton rejoined in fourth place ahead of Vettel.

Hamilton was soon setting fastest laps and on lap 41 Bottas slowed and moved aside to allow the Briton to sweep past into third place. He was now just under nine seconds behind Verstappen, who was now just 2.3s behind Räikkönen.

At the front Räikkönen was now attempting to control the gaps, saving tyres and fuel. With five laps remaining, though, the gaps were tight. The Finn was just 1.1s ahead of Verstappen, but the Dutchman was having to keep a close eye on his mirrors, as Hamilton was now inside DRS range. Behind them Vettel was still fifth and could not find a way past Bottas. Hamilton now knew that if he passed Verstappen to take P2 then he would be champion.

He saw a chance to do that on the penultimate lap. Verstappen made a mistake and went wide into Turn 12. Hamilton pounced and the pair battled furiously through the following corners. Verstappen held firm and when Hamilton ran out of grip in Turn 18 and went wide, Verstappen was assured of second. Behind them, on the same lap, Vettel made his move on Bottas, passing the Finn under DRS as the lap started.

Räikkönen then duly took his first win in 113 races, ahead of Verstappen, hamilton and Vettel. Bottas finished fifth ahead of Hulkenberg and Sainz. However, while eighth and ninth places were initially taken by Ocon and Magnussen, both were later disqualified, the Force India for a fuel flow irregularity on the opening lap of the race and the Haas for using more than the permitted 105kg of fuel across the duration of the race.

The disqualifications meant that Pérez was promoted to P8, Hartley moved to P9 and the final points position was inherited by Ericsson.

Hamilton’s third place, allied to Vettel’s fourth, means that the title battle continues to the next round in Mexico, with Hamilton taking a 70-point lead to the Autódromo Hermanos Rodríguez in a week’s time. 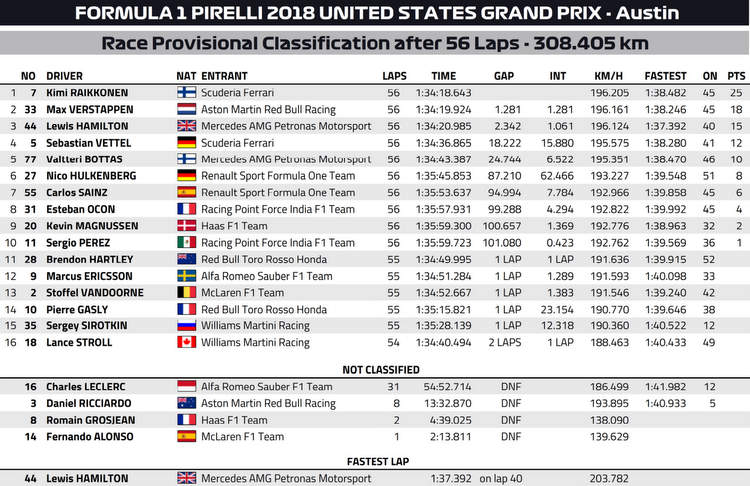 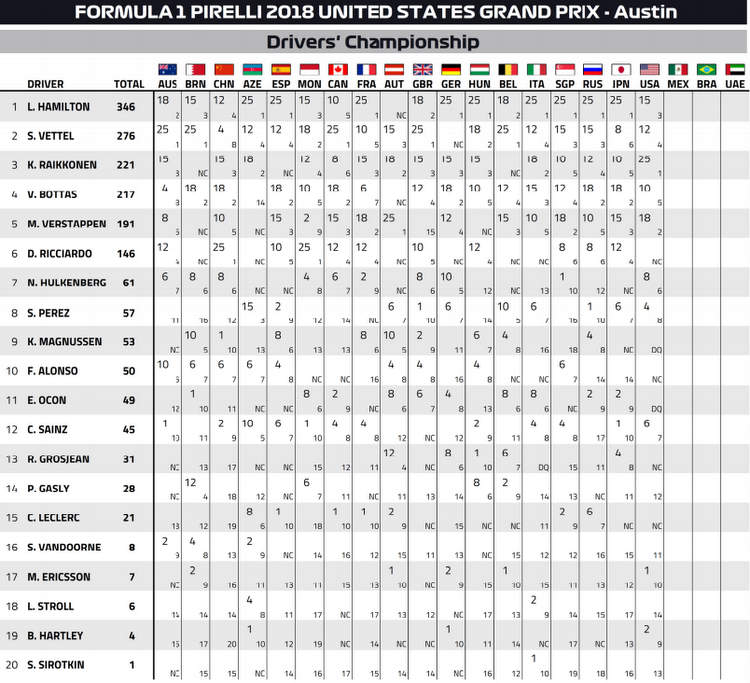 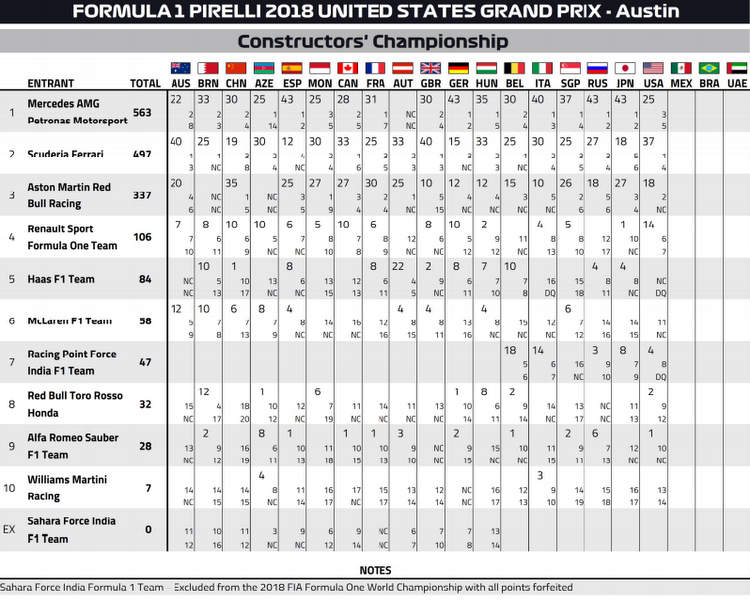