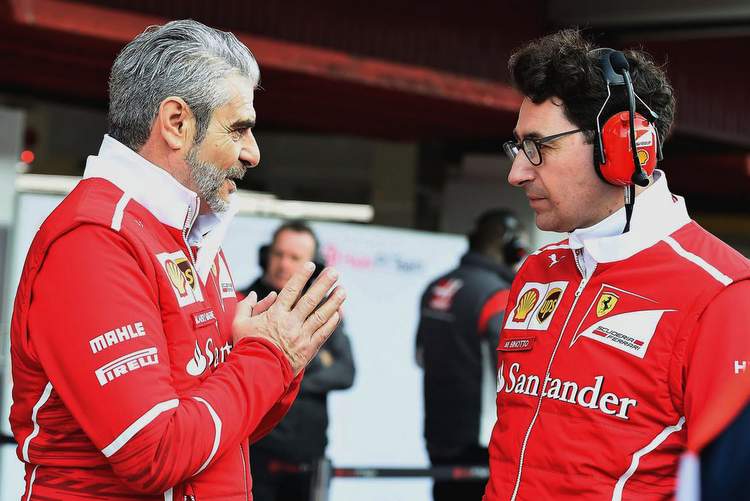 Amid one of most disastrous second half campaigns, turmoil is mounting within Ferrari with team chief Maurizio Arrivabene reportedly squaring up to technical director Mattia Binotto in what is a power struggling bubbling behind the scenes with origins.

What transpired on a morbid weekend at Suzuka for the Scuderia is well documented, with four rounds remaining their title challenging campaign is all but over for them. Barring a miracle they will be runner-up in both contests, with Sebastian Vettel set to lose to Lewis Hamilton, and Mercedes likely to beat Ferrari to the constructors’ title.

As a result, after months of remarkable restraint, Italian media have gone on the attack as again they were forced to report mistakes made by the Scuderia and their driver Vettel, while some journos have dug deeper and revealed that not all is well at Maranello, a civil war looms yet again.

The truth is, the late Sergio Marchionne’s big shoes have not been filled, he was the bulldog no one messed with and a big fish in the Formula 1 power stakes battle, but his legacy leaves a team split between the team leadership of Arrivabene and technical responsibilities which is Binotto’s domain.

Hence two factions have emerged, Arrivabene’s guys and Binotto’s crew – the latter strengthened when he had the ear of the late Ferrari president up until his passing.

Since then, Louis Camilleri has been installed as CEO at Maranello, while Agnelli heir John Elkann assumes the role of Chairman, but both appear to hands-off at this point.

Meanwhile, in the aftermath of the weekend in Japan reports of unrest and even revolution are making the rounds in Italy, Corriere della Serra report: “The relations between Arrivabene and Binotto are at historic lows, and the barometer suggests that there is a storm on the horizon.”

“Prompting this was a catalogue of strategic errors and the technical deficiencies in the car, with word being that the team principal wants to take overall responsibility which is not quite the case as the lateral management splits it in this way.”

“Problems with updates were an issue, from Singapore they went backwards. If Mercedes grew in stature, Ferrari have remained anchored and have not kept up with their rivals.”

In conclusion, reporter Daniele Sparisci wrote: “Whether harmony is found or the worst of this power-struggle remains to be seen, Arrivabene is well known to Camilleri [his former boss at Philip Morris] but there does not seem to be unlimited trust there.”

“While the president and main shareholder of Ferrari, John Elkann, remains silent for now, Until when?”

Since taking over the reigns, Marlboro man Arrivabene has been notoriously tight-lipped when dealing with media, and whenever he has the Ferrari team chief has always been ultra protective of his team.

But that all went south on Saturday afternoon after Ferrari seriously blundered qualifying, outsmarting themselves on a tyre call that ultimately blew their campaign to bits live on TV. Arrivabene was livid.

No doubt most astute F1 followers made a double take when they saw the Ferrari duo emerge for their last Q3 runs on Pirelli intermediate tyres, their wise men predicted rain which did come but literally a minute or less too late. It was one of those hero-or-zero calls, for Ferrari it was a big zero considering the circumstances and resultant damage.

So obvious was the qualy gaffe, that Arrivabene finally broke his veil of silence and lashed out like never before, “What happened [Saturday] was unacceptable. I am very angry. It is not the first time that these mistakes have occurred. I do not feel like pointing my fingers at someone in particular, but I’m very disappointed.”

“Unlike on other occasions, it was easy to understand what was happening on the track, as all our opponents left the pits with slicks. Sometimes it is more useful to take your eyes off computers and watch the track, using common sense,” mocked the Ferrari boss.

Of course, this was all big news in Italy, La Gazzetta Sportiva F1 writer Andrea Cremonesi, explained in his report, “In reality, the reaction is the clear indicator that there is a rift in the team, which has long been brewing and exploded after the death of Sergio Marchionne.”

“On one side, Arrivabene, and on the other the technical structure led by Mattia Binotto. At the center of the battle is the assumption of responsibility. Arrivabene now feels the need to shape the team to his vision, which is for him to have an even more central role.”

“The concept is: if I put my face to it then I choose the people and all of them report to me. Which, with the current structure does not happen,” concluded Cremonesi.

Writing for La Stampa, Jacopo D’Orsi also uncovered the dissent and growing unrest within the team, “In the last two months everything has happened to Vettel:

“This was the point of no return in the internal balance at Maranello, perhaps it is the first step of a new era, of changes that are inevitable at the top. A revolution seems to be at the door.”

“The pit wall is composed of six people under the technical direction of Mattia Binotto, supported by the team principal. That the divergence of views existed could be understood but that it is such a serious rift became clear from Singapore and Sochi onwards.”

Alessandra Retico, of La Repubblica, sheds more light on the matter, “Perhaps, simply, the Cavallino lost a brave captain who tows the red ship and all its crew into port. Sergio Marchionne had that kind of hold on the team.”

“At Suzuka, Ferrari needed to get it right so as to maintain their pressure on the championship. Instead, they were a shambles, trying a desperate tactic that finally opened the door to their weaknesses.”

“Arrivabene, always very protective of his team as the role imposes on him and always sparingly cautious with his comments because Marchionne did not appreciate too many words, this time opened the ‘dressing room’ and summoned the press immediately after the final whistle.”

“When he noticed that the inters were on the cars it was he himself who got on the radio immediately and asked the pitwall, led by Binotto, if that was the right call to make.”

“Worse was afterwards when Arrivabene went live with his criticism, those words should have been said in private not in public. For sure he already regrets the outburst.”

“But it is is also important to notice the faults of the one who manages the technical sector, the too silent Mattia Binotto. It is clear that there has not been the long-awaited update for the car while Mercedes, on the other hand, has clearly improved.”

“Binotto prefers playing hide-and-seek, not explaining when explaining needs to be made. Where is the problem? Engine? Chassis? Setup? Suspension?”

“Come out and tell us because the silence, spontaneous or imposed, creates more confusion, leaves room for speculation, hypotheses and uncontrolled voices. Even clarifying, talking, explaining, is part of the team game,” concluded Retico’s report.

This collection of editorials provides telling insight into Ferrari and their ever-growing problems by journalists whose beat is to cover the Scuderia and are duty bound to keep the army of Tifosi in the loop.

Ferrari under Arrivabene have not been kind to the press, particularly to Italian media, providing minimum information, unhelpful and by some accounts outright rude, even when they were ruling the roost earlier in the season.

As tends to happen in life, stubborn arrogance has backfired, now for the Reds to find sympathy among F1 scribes will be tough…

Arrivabene: I am very angry and very disappointed