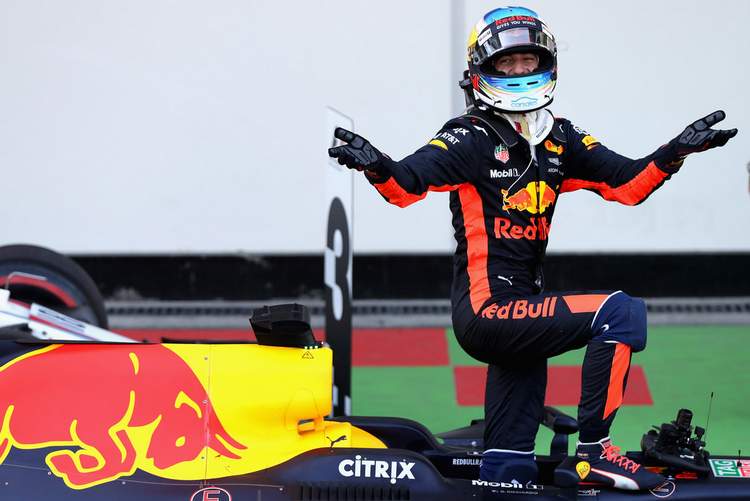 Fresh details are emerging regarding Daniel Ricciardo’s shock two-year deal with Renault which will see the big smiling Aussie bank an estimated $35-million per season (subject to confirmation) with the French outfit making him the highest earning athlete from Down Under and puts him in the Lewis Hamilton, Fernando Alonso and Sebastian Vettel pay bracket.

Ricciardo did not only shock the Formula 1 world with his decision to quit Red Bull, it so surprised team chief Christian Horner that when he got the call from his driver he thought he was joking. But it was no joke as the driver they groomed since he was a kid through to becoming a Formula 1 winner is gone at the end of the season.

Red Bull have only themselves to blame for losing the highly rated driver that was the stable backbone of the team. In October last year, the team opted to extend their deal with Max Verstappen until the end of 2020, an issue that upset Ricciardo and was probably the catalyst for his seeking an alternative employer.

The message was clear, “Max is our guy.”

Ironically Ricciardo is said to have struck an agreement with Dieter Mateschitz before the Austrian Grand Prix, with Red Bull sweetening the deal by agreeing to a one year deal so that the driver of the #3 car so that he could evaluate the team’s first season with Honda power.

Red Bull had reportedly already prepared a video announcement to confirm Ricciardo’s extension, but that video will never be seen in the wake of the final development.

Meanwhile, McLaren’s Zak Brown had tried to tempt Ricciardo to Woking with a $31-million offer but along came Cyril Abiteboul and Renault with the two-year deal which will see him bank $70-million.

Big credit to the Renault boss who played a fine hand of poker, bluffing his way through the Silly Season by publically countenancing the likes of Fernando Alonso, Carlos Sainz and Sergio Perez but in the end, he had the ace in his hand – Ricciardo!

No doubt Abiteboul had to convince Renault to break the bank for the 29-year old’s services, but at the same time the French outfit sent out a clear message with regards to their intent, which in turn was enough to lure Ricciardo away from Red Bull. The deal, arguably, Abiteboul’s finest moment at the helm of the team.

Ricciardo’s options were severely limited as Mercedes confirmed Lewis Hamilton and Valtteri Bottas before the summer break, while Ferrari look set to hang on to Kimi Raikkonen alongside Sebastian Vettel for at least another year.

Thus Red Bull appeared to be his best option, but how good will they be next year with Honda? A question that no doubt influenced the decision to stick with Renault power, albeit with the works team.

But the Verstappen factor was too much for Ricciardo to stomach and obviously made the big bucks deal a no-brainer for him. He will now earn almost twice the $20-million the Dutch youngster is pocketing per season from the energy drinks outfit.

Ricciardo, in terms of earnings, is now deservedly up there with the top three or four drivers of this generation while his skills are right up there too as most of the paddock well know.

For F1 fans this latest development will provide an intriguing sideshow to the big picture next season and only time will tell if Ricciardo made the right call. The certainty is that whatever happens in the next two years, he will bank enough money to live happily ever after.

Come the end of 2020, at 31, he will still be at an age where he will be able to continue in the top flight and if his Renault tenure does not pan out to be a winning combination, Mercedes and Ferrari will again be on his radar as much can and will change between now and then.

“It was probably one of the most difficult decisions to take in my career so far, but I thought that it was time for me to take on a fresh and new challenge,” explained Ricciardo.

“I realise that there is a lot ahead in order to allow Renault to reach their target of competing at the highest level but I have been impressed by their progression in only two years.”

“I know that each time Renault has been in the sport they eventually won. I hope to be able to help them in this journey and contribute on and off track,” added the man who intends to add to his seven F1 victories wearing the yellow and black of Renault.

Big Question: Has Daniel made the right decision?