Vettel: I don’t think it was overly optimistic 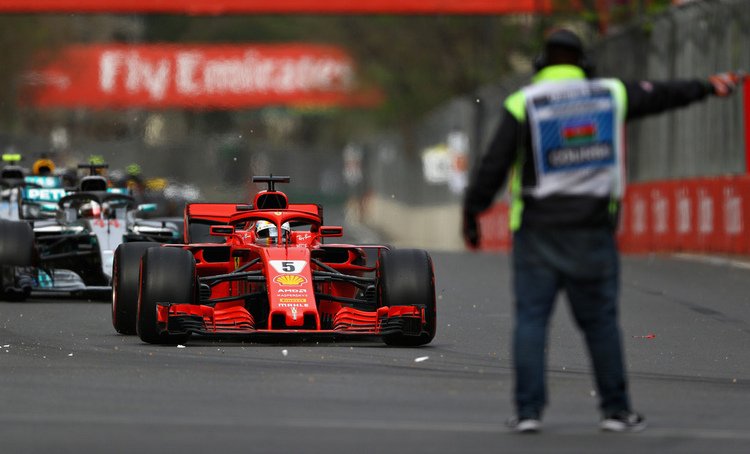 Sebastian Vettel said he had no choice but to try and pass Valtteri Bottas in what proved to be an ill-timed and ultimately misjudged move that cost him a podium finish in the Azerbaijan Grand Prix.

The four-time F1 world champion Ferrari driver had led the race and looked to be on course for victory until a late Safety Car intervention gave the Finn a chance to pit his Mercedes and emerge in the lead.

“I am happy that I tried,” said Vettel. “I’m not happy that it didn’t work, but I have to try. I don’t think it was overly optimistic to jump down the inside. I wasn’t overly late, otherwise, I don’t make the corner at all, but I did make it, just.”

Vettel attempted to pass Bottas, but ended up out-braking himself and locked up as he ran off before recovering to finish fourth, with archrival Lewis Hamilton bagging maximum points on the day.

“I didn’t have any option. Lewis was on the right so I can’t close on him. Valtteri was ahead of me. He left a gap. I was surprised, judging the braking was very difficult.”

“I was a bit trapped because I couldn’t see where I was relative to Turn One. We have our references and they are on the right – a kerb, the signs on the wall and on the left there is hardly any reference.”

“I had a decent re-start, I saw the gap on the inside and unfortunately I locked up. Without the lock-up, braking at the same point, I think I make the corner and it turns out to be a good move.”

“It’s easy to say it didn’t work so it is the wrong thing, but I had to try. We can’t let one or two seconds from the race have a shame on all the race, because there were a lot of positives,” added Vettel who departed Baku trailing race winner Hamilton in the championship standings by four points.